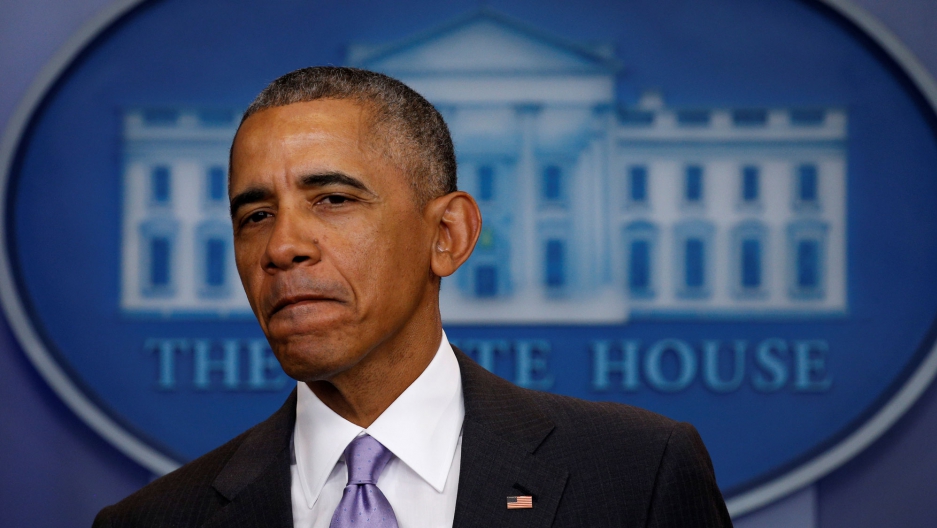 President Barack Obama commuted the sentences of 209 people on Jan. 17.

Obama commuted an additional 209 sentences Tuesday just three days before the end of his presidency — and more are still expected. Doing so brought his total commutations to 1,385, the most of any president in history, edging out Woodrow Wilson's 1,366.

But the big headline — record-breaking clemency — misses the nuance. Obama's record on clemency is different than his immediate predecessors, and it's also very much the same.

The president has the power to commute a federal prisoner's sentence or offer a full pardon. A commutation shortens sentences but does not restore civil liberties such as the right to own a gun or vote. A full pardon can restore voting rights but does not wipe away a criminal record. Obama only took the record on commutations — in other areas, he's still very much behind.

P.S. Ruckman, a political scientist and editor of the blog PardonPower, has spent years tracking the use of presidential clemency and says presidents should use the power regularly and often.

"It’s parts of checks and balances," Ruckman says. "The president, when he doesn’t pardon, he’s deferring and saying Congress is perfect and the courts are perfect. As long as sentences are regular and serving of sentences is going on and people are rehabilitating — and I think that stuff is going on every day of the week — there should be pardons, clemency."

In April 2014, the Obama administration announced a clemency initiative and asked for applications from low-level, nonviolent offenders who had served at least 10 years in prison and had no history of violent behavior before their conviction.

Thousands of applications poured in (even before the call, Obama was receiving record numbers of petitions), making Obama the most-petitioned president in history by a wide margin.

But the clemency project didn't begin until six years into Obama's presidency. His first commutation came on Nov. 21, 2011, and the next batch, only eight people, came Dec. 19, 2013. Most commutations came in the final year of his presidency: 86.7 percent of all his commutations occurred in 2016 and 2017.

Along with Obama's record-breaking number of commutations, Obama has issued a record number of denials, as well. His acceptance rate for pardons or commutations is 4.4 percent, which roughly matches the trend of modern presidents but is still far lower than most 20th-century presidents. Before Ronald Reagan, presidents approved between 20 and 30 percent of the petitions they received.

FDR surpasses all presidents since 1900 for clemency, though he also served the longest. Woodrow Wilson, ranked No. 2, is now second to Obama in commutations, but he granted commutations steadily throughout his presidency, instead of toward the end.

"It is true mathematically that most presidents have granted the largest number of pardons in the fourth and final year of their term," Ruckman says. "What’s not true is that presidents have bulked this up with outrageous splurges at the end."

Ruckman says he's thrilled with Obama's use of the pardon, but wishes that Obama had granted clemency steadily throughout his terms.

"I worry that while he’s doing short-term good, he’s doing long-term damage to the pardon power," he says.