After Noor (right) fled Syria with her family, her husband began to be abusive. She now receives counseling and health services at this women's center in Jordan.

Children chase each other through corridors as their mothers catch up on the latest news. Around them, nurses and counselors lead patients into beige-walled rooms adorned with posters about domestic abuse, breastfeeding and children's rights.

This is one of a handful of dedicated women's centers in eastern Jordan, and the place is busy.

Funded by the UN Population Fund, the Institute for Family Health in Deir Alla opened a little more than three years ago with the primary aim of serving Syrian refugees in one of the poorest parts of Jordan.

It offers family planning, prenatal and postnatal care, and checkups for kids, as well as counseling and support for victims of gender-based violence.

"In all honesty, after leaving Syria, I was pretty shaken up psychologically," says Nour, a 31-year-old regular at the center, who asked that we not use her last name to protect her privacy.

Nour fled the southern city of Daraa with her husband and young daughter after their house was bombed. As her husband struggled to find work in Jordan, their financial situation deteriorated. She says that's when he began to take his frustrations out on his family.

"I didn't feel able to open up and share anything with anyone," she says, shrugging slightly. "At first, I used to come here just to see the gynecologist, but after I saw how well I was treated, I started seeing the psychologist, too." 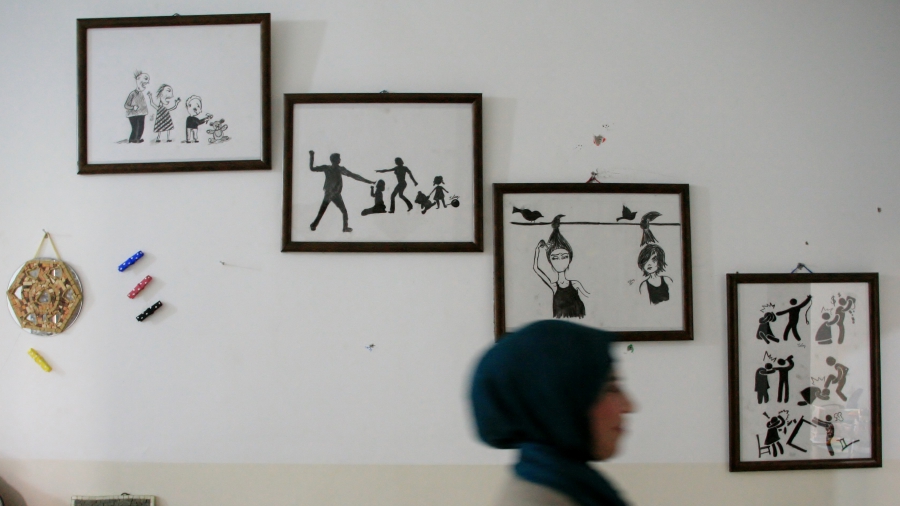 At the Institute for Family Health in Deir Alla, Jordan, there are domestic violence awareness posters. About half of the center's clients are victims of domestic abuse.

It was the counselor at the center, a woman named Eman Aladi, who helped her deal with the tension and violence that was brewing at home.

"The first year we were here, there were so many arguments at home that it got to the point where we separated for a bit. I just couldn't take it anymore, I had to leave the house. He hits and he breaks,” Nour says about her husband. “He attacks whatever is in his path, whether it’s me or the kids."

For Aladi, this sort of case makes up roughly half of her workload every month. That translates to about 400 women in the Deir Alla area alone who come to the center, victims of domestic violence in one form or another. They are not just Syrian, either.

In fact, about half of Aladi's patients are Jordanian, a testament to how difficult life is for so many local women at the moment as well. Unemployment nationwide, for example, is at 15 percent. Jordanians say it doesn’t help that there are now about 1 million Syrian refugees living in their country, many of whom are willing to work for lower wages.

"It all comes down to financial issues, you know, how our circumstances are here in Jordan," says Maryam, a 39-year-old woman from Deir Alla. "I came to the psychologist because I felt very stressed, and I wanted to vent, to let it out."

Like Nour, Maryam was abused by her husband, and she depends on the center for support and help. (Like Nour, she also didn’t want to give her last name.) On top of regular counseling, Maryam also enjoys participating in the activities and classes organized at this center — like origami — which she says gives her a chance to be creative and chat with other women experiencing similar problems.

She would have her husband come with her for counseling too, she says, but so far he has refused. Still, although their relationship hasn't radically changed these past few years, Maryam says that she has.

"I think the services are really amazing here," she says with a smile. "Eman has given me a lot of hope and optimism for life. When I first came here I was desperate. I had really lost all hope, but thank God she gave me hope again."

Although the center was set up for Syrians, there is clearly an enormous local need. One in three Jordanian women has experienced some form of violence at the hands of their spouse, according to a 2012 government survey, but only half of them seek any help.

That may be because there aren’t many services for women outside of the capital Amman, something that is now changing due to funding for the Syrian crisis. The Deir Alla center is just one of 15 safe spaces for women that the UN has opened across the country in the past five years.

If it hadn't been for the money now being funneled into Jordan to respond to the Syrian refugee crisis, says Aladi, the center would never have opened, providing not just counseling for domestic violence victims, but also other vital medical services.

"Jordanian women in this area used to have to go [to] a hospital far away and wait a long time just to get an ultrasound, for example," she explains. "Even then, sometimes they would get it, sometimes not. The only other option was an expensive private doctor in the area, which was not affordable for most."

But now, she says “we can offer this as a free service to all women in the area."