Director of the Danish Cyclists’ Federation Klaus Bondam, left, holds a microphone while reporter Jason Margolis rides alongside him on the inaugural route.

The 1.8-mile inaugural procession down Pennsylvania Avenue dates back to Thomas Jefferson’s second inauguration in 1805. The iconic boulevard has changed a lot since then, of course — and that goes for recent years, as well — as a bike lane was installed down the center of the street in 2010.

Last week, I joined a crowd of about 30 people in front of the US Capitol for a ride along the inaugural route, organized by the World Resources Institute and the Washington Area Bicyclist Association.

“We’re about to ride on America’s Boulevard,” said Tommy Wells, a former Washington, DC, city council member who now directs the city’s department of energy and the environment.

“That’s how I rode to work every day, it was almost seven to eight lanes wide, and the largest sidewalks you’ll find in any city and no place for bicycles. And it really was like an extreme sport each morning, coming through here and then launching myself down Pennsylvania Avenue to be sure I didn’t get hit.”

Thanks to the relatively new cycling lane, Wells doesn’t worry about that any more. He says one of the crowning achievements, for him and a lot of cycling advocates, was when President Barack Obama got out of his car and walked part of the inaugural route in 2013.

“I was cheering, seeing that he was walking down our bike lanes, that America saw bike lanes,” said Wells. 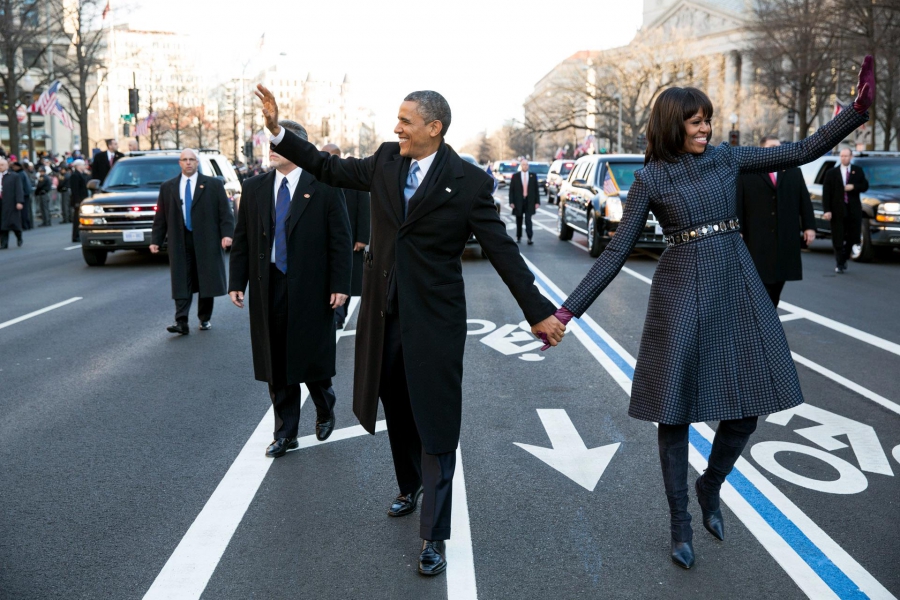 President Barack Obama and Michelle Obama walk in the inaugural parade on Pennsylvania Avenue on Jan. 21, 2013.

DC city officials have worked with urban planners from Denmark to build up the city’s cycling infrastructure and culture. Today, Washington has about 70 miles of dedicated bike lanes, and 4.5 percent of commuters in DC bike to work. Fifteen years ago, that number was less than 1 percent.

The city still has a ways to go, though, says Lars Lose, the Danish ambassador to the US.

“To be honest, it’s not as good as in Copenhagen,” said Lose, as he cycled down Pennsylvania Avenue. “But it’s pretty good, compared to other capitals around the world where I’ve done some biking, it’s pretty good. And it’s getting better by the day.”

He gave the city’s cycling infrastructure a "B+" grade, but an "A+" for ambition.

On Pennsylvania Avenue, we rode down the center separated from cars and trucks by lines of paint and 3-foot-tall plastic posts. Normally, there are small rubber barriers here, but those were temporarily removed for the inaugural parade. (Still, coming from an American-based perspective, I thought the ride in DC was great.)

“In Denmark, we have elevated bike lanes, which is much more secure, much more safe than just having paint on the roads,” said Lose. Copenhagen has more than 200 miles of bike paths that are physically segregated from vehicles.

Of course, installing bike lanes like that is expensive, and a lot of people don’t want more cycling infrastructure — bike lanes can take real estate from cars. And, let’s be honest, cyclists can be a menace on the roads.

But give DC’s cycling advocates some more time. Even Copenhagen, one of the world’s greatest cycling cities, took decades to become what it is today.

“You actually have 63 percent of the members of parliament using their bike every day when they go to work,” said Lose. “That makes a difference when you see people, actually your politicians doing this.”

Some members of Congress do cycle to work, and there is a Congressional Bike Caucus. As for recent commanders in chief, George W. Bush was an avid mountain biker and Barack Obama has been photographed biking on vacation many times.

We don’t know much about Donald Trump’s cycling tastes. He did own a US bike race in the 1980s, called the Tour de Trump, which followed a circuitous route from Albany, New York, down to Atlantic City, New Jersey. When the race began, Trump said it would rival the Tour de France; Trump’s race only lasted two years.

At the time, NBC Sports asked Trump when the last time was that he got on a bike. Trump replied: “That’s a tough question. That was many, many years ago. But I would say when I was about 7 or 8 years old was probably about it. ”

But back to the ride along Pennsylvania Avenue. Klaus Bondam, director of the Danish Cyclists’ Federation in Copenhagen, said more bikes on the road mean less pollution, fewer greenhouse gases emitted, less traffic and improved health for cyclists.

“We have calculations in Denmark stating that for every kilometer we exchange the car with the bicycle, we actually save the Danish society around $1 in prolonged life and improved health effects,” said Bondam.

President-elect Trump has spoken a lot about improving transportation infrastructure in his first 100 days in office, but Bondam fears that might mean emphasizing the car.

“We’ll see what happens. And hope for the best,” said Bondam.

Trump really hasn’t said anything recently about cycling, other than to ridicule Secretary of State John Kerry for breaking his leg after falling off his bike while cycling recreationally in France in 2015. Shortly after Kerry’s accident, Trump vowed he’d stay away from cycling if elected president.