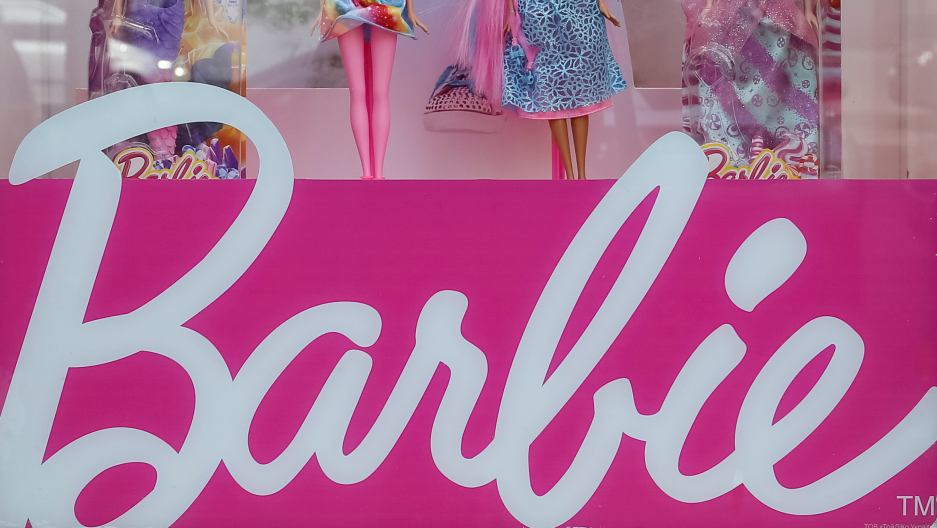 Barbie dolls are seen in a window of a toy store.

In 1998, Slovenian toy company Mehano designed a line of children’s electronic typewriter toys with the ability to write secret messages.

Eventually, the company licensed the typewriter to another company that had something altogether different in mind for the toys. Slathered in pink, it was soon headed to market to appeal "to girls." Can you guess what brand was behind the refresh?

That’s right — none other than Barbie herself. But there’s a catch — the secret messaging feature was completely pinkwashed — never revealed as a capability of the new Barbie typewriter. Because girls would never be interested in writing secret messages — right?

The four encryption modes — each featuring a simple alphabet substitution cipher (or 1-to-1 encoding) — were left out of Mattel's instruction manuals and advertisements. Mattel is Barbie’s parent company. Even the latest model, produced in 2015, omitted this novel feature. You can try out the original typewriter’s encoding scheme in our app below.

It’s an all-too-common marketing assumption that continues to plague the “pink aisle” of girls’ toys. They often fail to encourage little girls to grow up to be engineers and scientists. A December report by the Institution of Engineering and Technology showed that boys were almost three times more likely to receive a STEM-themed toy for Christmas.

“STEM toys are by default for boys,” says Meryl Alper, professor of communication studies at Northeastern University. “We have to add ‘for girls.’” With over a decade of experience working in children’s media at Northeastern, Sesame Workshop and Nick Jr., Alper emphasizes the importance of representation and diversity in characters and storylines. Playtime matters.

“Children use the objects in their world to think through ideas,” she says. “If you have objects that signal to a kid that it’s not for them, either explicit or implicit, you reduce that opportunity to learn through manipulation.”

Some innovators have taken matters — and funding — into their own hands, frustrated with the assumptions of the toy industry.

Debbie Sterling, founder and CEO of Goldieblox, had a vision to create toys that encouraged girls to become engineers and problem-solvers. But nobody would buy it.

When she brought her prototypes to the New York Toy Fair, she was told that Goldieblox toys would never sell. “They said girls don’t like engineering. Girls don’t like building. That’s a boy play pattern. Girls want to be princesses, they want to play fashion. Go look at the pink aisle.”

Undeterred, Sterling turned to the power of the crowd. She started a campaign on Kickstarter, and that campaign went viral, raising more than $285,000. Today, Goldieblox are sold at Target, Toys 'R' Us and numerous local toy stores throughout the US.

In recent years, Mattel has made efforts to keep up with changing conceptions of gender and identity.

But the path is not always straightforward. A 2010 children’s book, titled “Barbie: I Can Be a Computer Engineer” resulted in public outcry when it featured a storyline where, ultimately, boys step in to get the job done.

Self-described feminist and geek Casey Fiesler countered by “remixing” her own version. A copyright law researcher and information science professor at the University of Colorado, she wanted to give Barbie a more empowering storyline. Her version went viral, along with other complaints, and eventually Mattel issued a public apology and pulled it from bookstores and online.

Still, Fiesler wonders about the role of Barbie and other brands’ attempts to appeal to girls. “Does it always have to be the case that we make science girly to make girls like it?” she asks.