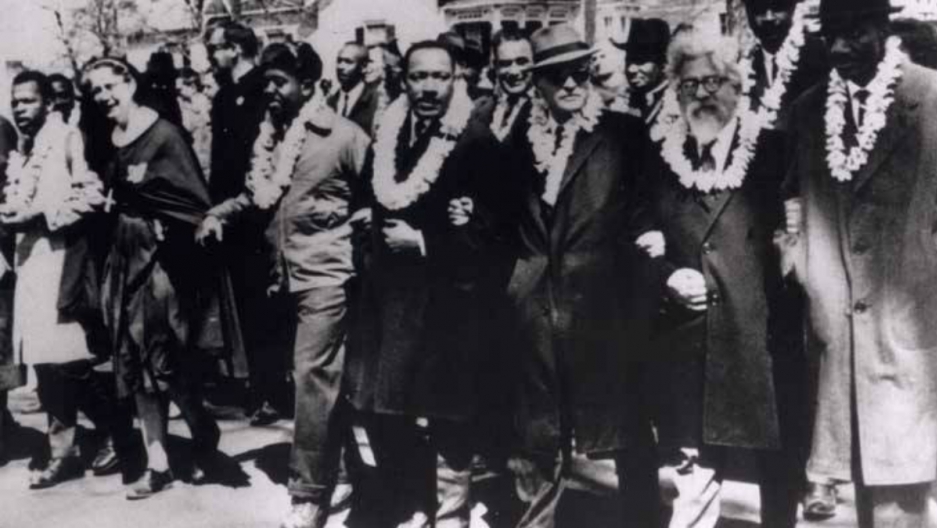 Susannah Heschel was just a child in the spring of 1965, when her father left for Selma, Alabama, to march with those demanding that everyone be allowed to vote regardless of their skin color.

“He kissed me goodbye,” says Heschel. “And I remember thinking ‘I don’t know if I’ll ever see him again.'”

Just a few weeks earlier, many demonstrators had been brutally attacked by police officers on a day known as Bloody Sunday.

Heschel’s father returned safely. But the experience left an impression.

“My father came home feeling like it was a religious event,” says Heschel. “He said, ‘I felt my legs were praying.’”

To Heschel, and her family, the religious aspect of the Civil Rights Movement is an important part of the story, even if it’s not talked about as much.

That’s because Heschel is a professor of Jewish Studies at Dartmouth College.

And her father, Abraham Joshua Heschel, was a rabbi.

Heschel’s father was born in Poland and lost several members of his family to the Holocaust. He was able to escape and come to the US, where he became an activist.

A calling, according to Heschel, with a lot of historical precedent.

“Jews came to the United States at the turn of the century from Russia, and there were Yiddish newspapers that would report in screaming headlines that there were Pogroms here in the United States. And what did they mean? Lynchings,” says Heschel. “Jews were outraged by that. How could that be? Russia is one thing but in the United States? So there is a long tradition of rabbi’s speaking out against segregation.’’

Heschel believes that, in part, the Civil Rights Movement became so powerful because everyone felt included, regardless of their religion.

“If you look at Dr. King’s major speeches, he doesn’t talk about Jesus, he doesn’t make this an exclusively Christian event,” says Heschel. “That openness, that embrace of Jews meant so much to my father.”

The night before he joined the march, Heschel’s father stayed in the same house as King and a few others. This house, which belonged to Sullivan and Richie Jean Sharrod Jackson, became an informal headquarters for activists.

Heschel later spoke to Richie Jean Sharrod Jackson about the night her father stayed there.

“Mrs. Jackson told me she got up in the morning and went into the living room, and there was Dr. King standing in one corner of the room saying his prayers, and my father was in another corner of the room saying his morning prayers, and there were a few others in the dining room praying,” says Heschel. “That to me is such a central concept of the Civil Rights Movement, coming together in that way, each one praying in their own faith tradition, in a different part of the house.”

Even as a kid, Heschel says that she felt herself to be surrounded by heroes. Heroes like her father, other friends and activisits, and King.

“He was always so gentle and kind and friendly to me,” says Heschel. “There were times at the end of lectures when I’m sure he was tired and just wanted to relax, and yet he was so generous and sweet."

Now, says Heschel, she often goes back and listens to King's speeches. Speeches that made her cry when she was younger.

She credits King with teaching her about "how to be a human being, how to be a mensch in the world," and helping set her on her life's path.

"I became a professor of religion because of him," she says.