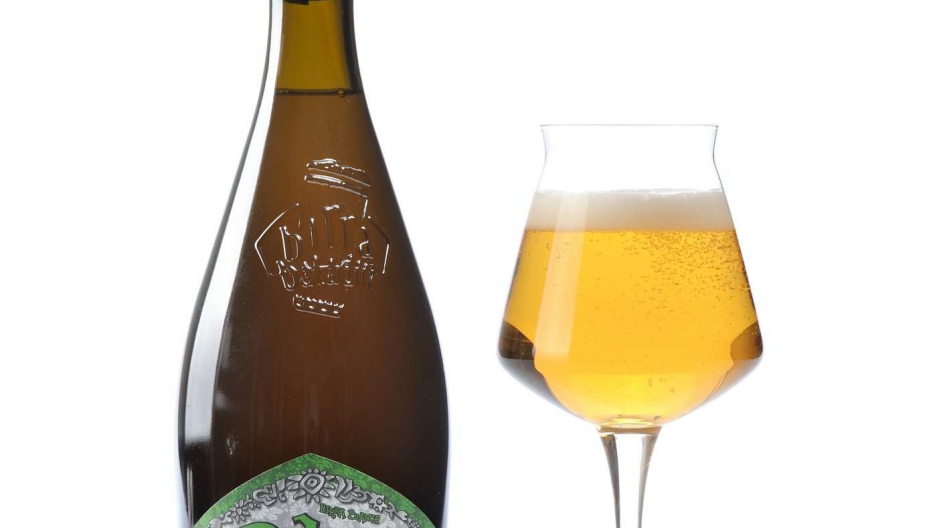 A bottle and glass of Baladin's "Isaac" brewed in Italy are pictured here.

You know, there's nothing better than sitting in a Roma café and swilling a cold bottle of Peroni with a wood-fired pizza.

That said, there are a lot of more interesting types of Italian beer to drink.

Yes, the land of Peroni is actually home to a bustling microbrew scene.

“Italian craft beer production — which has grown dramatically from simple garage beers modeled after English ales to microbrew empires — differs from region, with variations on style. For example, one may find chestnut-enhanced amber ale at breweries in the center of Italy where the ingredient is rampant. Head south, and citrus is frequently mashed into local IPAs,” wrote Coral Sisk in Eater.

Sisk goes on to say, “The bulk of Italian craft beer production began in 1996 thanks to Piedmont-native Teo Musso and Agostino Arioli, the country's craft beer pioneers and founders of Baladin and Lombardy-born Birrificio Italiano, respectively.”

The hardest part about expanding the beer scene in Italy was twofold, according to John McKusick, the beer director of Eataly Boston, which carries some of these craft beers. McKusick says the first hurdle was regulation. “And after that, you actually had to convince the public that beer was worth drinking in a land of these amazing — probably the world’s greatest wines,” he says.

McKusick says the Italian brewers first sold their goods to wine stores. And the workers drank them all up. Eventually, the beer got to the public. And even though it’s a relatively new brewing scene, it’s growing like mad. It might be that Italians love greatness. And that’s exactly what is being produced.

“Artisanally brewed beer is an art form. Like cheesemaking, winemaking and charcuterie,” he says. “These craftspeople create products we can consume that not only taste amazing but change our moods, as well. They can lift our spirits, support our woes and inspire our creativity. Buying artisanal beer versus industrial beer is like buying a Picasso versus art from Ikea.”

So move beyond Peroni and try these five beers:

Witbier
5.0% ABV | Piozzo, Piemonte, Italy
Named when the brewer's son Isaac was born. A Belgian-inspired White Ale, which is a wheat-based ale with bitter orange peel and coriander. The most true-to-style beer in the Baladin lineup. Pours slightly orange color with a remarkable head. Isaac is comfortably soft in the mouth and delivers mellow-toned wheat with a bright, tart, orange citrus component.

Wild fermented ale with Barbera grapes fermented in Barbera wine barrels
8.0% ABV | Torino, Piemonte, Italy
This sour beer is similar to a Belgian Lambic with a distinctively Piemontese twist. Barbera is one of the most popular Italian wine varietals. Loverbeer showcases this grape in a beer with a wild fermentation. The result pours a purplish color, is light, sour and extremely refreshing with a prominent fruity flavor of Barbera. This is where the worlds of wine and beer seamlessly cohabitate.

Italian Göse Sour
4.5% ABV | Soragna, Emilia Romagna, Italia
"Kiss my Lips" is the translation for this sour ale that is a blend of barrels that are 9 months old (and inoculated with lactobacillus) and a newer beer that is brewed with Himalayan pink salt. The blend then is aged again — but the result is a supercrisp, citric beer with a slight hint of salt in the finish that lingers. A beautiful interplay between the acidity, lightness and a slight hint of salt that is very soft.

Strong Ale with Cherry
5.3% ABV | Montegioco, Piemonte, Italia
This beer highlights the Bella di Garbagna cherry that is found locally in the area of Alessandria. Medium-bodied with a soft mouthfeel. Mild flavors of malt and wheat support a tart cherry flavor that adds a slight touch of acidity. A very juicy, crushable beer.

Amber Sour Wild Ale
6.5% ABV | Torino, Piemonte, Italia
An amber-colored beer that sees a wild fermentation resulting in a sour character, dry-hopped in oak barrels that marry the character of malt with floral hops, oak and wild yeasts. Produced by the Renzo Losi, the original brewer of Panil Sours.

(These beer descriptions from the brewery's website have been slightly edited.)