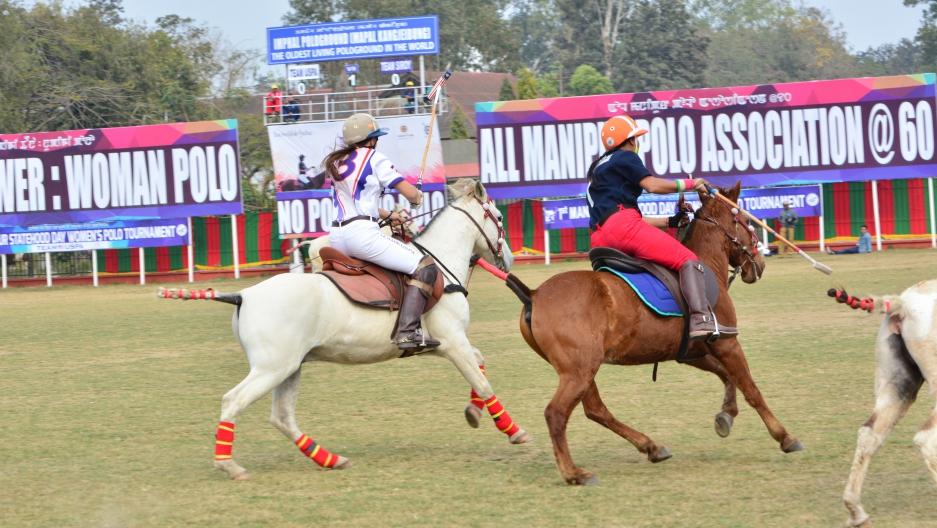 American and Manipuri players particpate in the woman's polo tournament in Manipuri in January 2016. They're riding the native Manipuri ponies.

Persia claims to be the birthplace of polo, but the modern version of the game comes from the small state of Manipur in northeastern India. The British discovered it there and brought “hockey on horseback” to the West in the 19th century. These days, the West is going back to Manipur to play polo.

Since 2013, members of the United States Polo Association have been coming to compete with Manipuris. The 2017 USPA-Manipur games get underway next week in Manipur’s capital, Imphal.

For much of the year, the Mapal Kangjeibung grounds in the center of Imphal are used for soccer. But in the crisp January air, this stadium returns to its roots — as the world’s oldest active polo ground. Manipur’s historians say the earliest records of a polo match can be found in court chronicles that date back to the first century.

Today, however, the game is all about women power. The women from Team USPA come here to play alongside the Manipuri women, all under the watchful eyes of a Kangla-sha statue — a dragon with antlers.

Communicating with local players is sometimes a challenge, says Tiamo Hudspeth, from Team USPA, who traveled to Manipur in January 2016. Still, she picked up a few Manipuri words. For instance, lingba for "strong." Nopa for "weak." “We’d chant lingba, no nopa before we played our game,” she says with a laugh.

Another issue for the Americans is the size of the Manipuri ponies. They’re only about 4 feet tall, from shoulder to hoof. Cristina Fernandez, of the US team, says it was a little “intimidating” as a “tall American” to ride these small ponies. They look a little like windup toys, she says. “I wanted to sort of wind it up and let it go.” 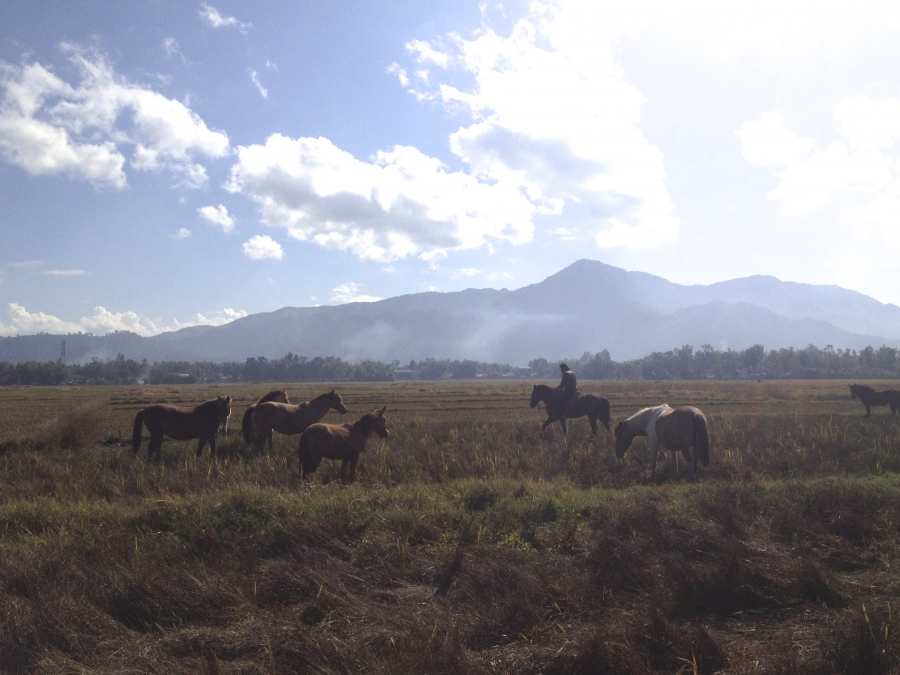 Manipuri ponies are grazing here. The state of Manipur has pledged to create a sanctuary for the ancient breed whose numbers are dwindling.

These ponies are one of five indigenous Indian breeds, semiwild ponies, found just in this corner of India. But their numbers are dwindling. In 2013, the Manipur state government declared the ponies here an endangered breed. L. Somi Roy, whose mother belonged to Manipuri royalty, helps put together the USPA tour. His interest in polo, he says, is really about the ponies.

“We have been promoting USPA here as part of our way of getting attention drawn to the Manipuri pony,” Roy says. He says their numbers have fallen to fewer than 500.

The ponies are revered here — they were used for war and sacred ritual, not as pack animals. But Roy, who’s worked as a film curator in New York, says when he returned to Manipur in 2000, he would see abandoned ponies wandering around the city, feeding on garbage because people could not afford to take care of them, and their grazing lands were vanishing.

At the polo grounds during the games in January last year, there was a banner with the words “No pony No polo” — a reminder that if the ponies disappear, so would Manipur’s polo tradition. Roy hopes the international attention from the USPA will give the Manipuri pony a lifeline. In November 2016, the Manipuri state government announced plans for creating a sanctuary for the remaining ponies to help preserve the breed.

A temple for Marjing is shown here. He's worshiped in Manipur as the deity who introduced polo to the world.

They might be looking for some divine assistance, as well. Manipur has a god of polo, Marjing, whose mount is the winged pony. It’s said that when the pony’s wings were clipped, it fell to Earth and became the Manipuri pony.

Marjing’s shrine on a hillside near Imphal is strewn with small, white figurines of horses. Red and white polo mallets hang in a corner, and there are pictures of horses on the wall. The shrine overlooks a meadow that Roy expects will be a new grazing area for the ponies, keeping alive Marjing’s flock as well as an ancient piece of world polo heritage.