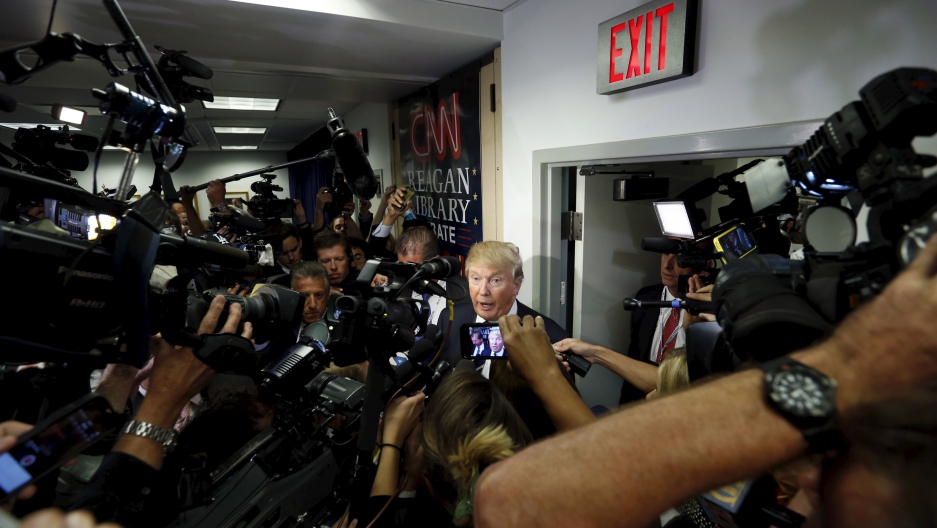 Donald Trump talks to members of the press after the second official Republican presidential candidates' debate of the 2016 election, in Simi Valley, California, Sept. 16, 2015.

"I think in total we had about half a dozen stories that only dealt with the press conference," Kolb says.

Like news organizations in the US, Sueddeutsche Zeitung is grappling with how to cover Trump, who has been more inclined to communicate with the public through his Twitter account than through the press.

"I think his Twitter feed is really a window into his personality," Kolb says. "I think it really shows what are the issues that he pays attention to."

(Kolb's advice for reporting on Trump's tweets? Fact-check and give context.)

Germans are especially interested in the future of US-Russia relations, Kolb adds.

"We have this right-wing populist party, Alternative fur Deutschland — Alternative for Germany — who are also very pro-Putin and think that it was totally OK that [Russia] annexed Crimea," he says.

This is exactly why, he says, journalists need to cover the next US administration with care, attention and guts.

For example, Kolb wants to see journalists stand up for one other when Trump singles them out, as he did with CNN's Jim Acosta during this week's press conference. Trump refused to take Acosta's question and attacked CNN over its choice to report on a dossier of unverified and damaging claims about Trump's connections to Russia.

"Your organization is terrible," Trump said, as he and Acosta spoke over each other. "You are fake news."

"The 'media' is getting attacked in this country a lot and also back in Europe," Kolb says, "and I think it would be good to try and stick together and fight for the profession."