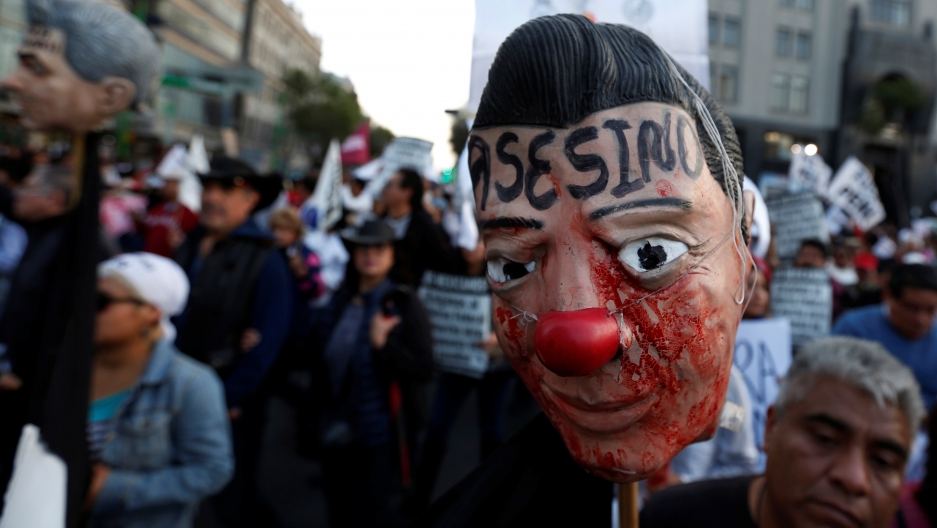 A mask with fake blood depicting Mexican President Enrique Pena Nieto is seen during a protest against a fuel price hike in Mexico City, Mexico January 9, 2017.

Protesters are taking to the streets throughout Mexico to express their outrage over an increase in gas prices, corruption scandals plaguing the country, and the plummeting peso, which hit record lows last week.

Meanwhile, the popularity of President Enrique Peña Nieto continues to sink, with his approval ratings dropping below 25 percent. Elisabeth Malkin, Mexico correspondent for The New York Times, says demonstrations are growing throughout the country.

“On Saturday for example, there was a protest in Mexico City, and a much bigger one in Mexico’s second city of Guadalajara,” she says. “There was another protest again [in Mexico City] [Monday], and there are protests on the border. It’s really been quite widespread.”

Though people are taking to the streets and to social media with the hashtag #Gasolinazo to protest a 20 percent increase in gas prices, Malkin says the fuel demonstrations have actually come to symbolize a myriad of issues.

“People are being asked to sacrifice, but there’s a sense that politicians have continued in their corrupt ways,” she says. “Mexico has seen a number of corruption scandals that have cost hundreds of millions, if not billions of dollars. People are saying, ‘Wait a minute. We’re being asked to sacrifice and the prices of our ordinary lives are going up, and yet the government seems to be unwilling to do anything about all of the money that’s been stolen?’”

On Monday, Peña Nieto announced an agreement to ease the fiscal burden on ordinary families, but the plan lacked concrete details, Malkin says.

On top of all this is the question of President-elect Donald Trump. The Trump Administration plans to put more economic pressure on Mexico and build a wall along the southern US border, something that could make the situation in Mexico worse.

“There’s a great deal of anxiety here about the Trump presidency,” says Malkin. “The question is really how far will he go in keeping his campaign promises, because if he does, that will have a huge impact on Mexico, especially renegotiating or even tearing up the North American Free Trade Agreement, which has brought a lot of investment to Mexico and has created jobs.”

Though he hasn’t officially taken office yet, Trump’s influence has already reached south of the border.

“Last week, we saw an announcement that Ford would cancel a planned new assembly plant here,” Malkin says. “Now, it’s unclear really how much President-elect Trump’s threats and bullying on Twitter was the reason for that, it also has to do with the market for small cars — Mexico’s really become a center for producing small cars. But if we see more of that, that’s of great, great to Mexicans.”