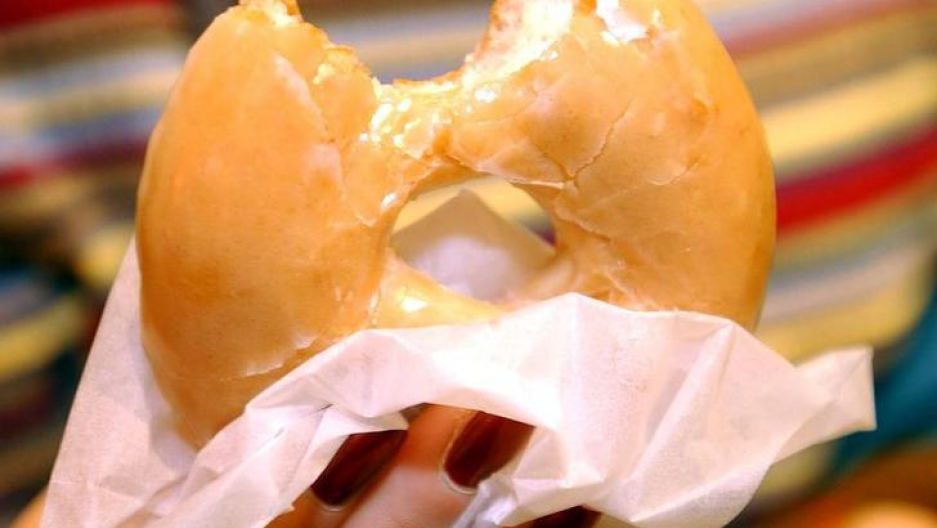 A customer samples a doughnut at a Krispy Kreme store.
Credit:

The US-Mexico border area — especially near the cities of El Paso, Texas, and Juarez, Mexico — has something of a reputation for crime.

El Paso and Juarez have served as transit points for criminal gangs trafficking in guns and illegal drugs.

"The addicts pull up just after nightfall near a sedan parked along a busy street in this border city best known for murder,” writes Los Angeles Times reporter Kate Linthicum, describing a typical scene in Juarez.

“One by one, they fork over fistfuls of cash to Sonia Garcia, who reaches into the trunk of her car and hands over the trafficked goods," she continues.

But hold on. Linthicum isn't talking about drugs or guns. The goods here are Krispy Kremes. Sugary, glazed doughnuts.

On any given night in Juarez, you can find Sonia Garcia and her son selling doughnuts out of the trunk of their car. They make daily cross-border trips from Juarez to the Krispy Kreme store in El Paso, where they buy 40 dozen or so assorted doughnuts, which they sell to their Juarez customers at a modest markup. It’s a family affair, so they’ve been affectionately nicknamed the “Krispy Kreme Familia.”

“Mexico does not lack when it comes to fried sugary dough," says Linthicum. "There’s the churro, there’s the sopapilla, there’s the buñuelo, which is this fritter-like delicious goodness. But Mexico does not do doughnuts well. … They tend to be dry and not up to American doughnut standards."

And it seems that residents of Juarez, like many Mexicans, are obsessed with Krispy Kremes. When the doughnut franchises started coming to Mexico back in 2004, Linthicum says, “People went wild and to this day if you actually get on a flight flying from Mexico City to a more provincial part of the country, you're likely to see multiple passengers toting boxes of Krispy Kremes for their family back home.”