Parmis' painting, "Quiet Noise," was displayed at Restart's exhibition at the Museumsquartier in Vienna.

It’s been a long time since Parmis has felt this calm.

Sitting at her desk in the dormitory room of a refurbished Siemens office complex at the edge of Vienna, the 29-year-old Iranian refugee isn’t thinking about her safety, or where she’ll find food. She’s moved up in her hierarchy of needs: Right now she’s focused on her art. “When I’m drawing, when I’m painting, I forget everything in my life, my pain,” she says.

Parmis, who came to Austria in November 2015, says she fled her home in Tehran for political reasons. After flying to Turkey, she traveled by “boat, bus and car,” first to Salzburg and then to the Austrian capital. The journey took just over three weeks.

“Sometimes I can’t sleep just because I think about the way [here],” says Parmis, who agreed to an interview on the condition that her last name and the exact reasons for her departure from Iran not be shared. “But I’m OK now.”

She briefly stayed in two different refugee camps before landing a spot in the refugee shelter run by Austria’s Samaritan Union Workers, one of the country’s largest social services organizations. In the summer of 2016, after she had settled in, a friend saw a call for refugee artists on Facebook and told Parmis about it. The call also came with an offer of help, in the form of donated paint, canvases and pastels. Parmis was overjoyed. She took the supplies and got to work.

On Oct. 26, she exhibited her work in a show that drew about 500 people at the Museumsquartier (MQ), a 645,000-square-foot museum and event complex on the edge of Vienna’s historic city center. Parmis’ paintings then moved to the nearby Kulturraum Neruda exhibition space for another week.

The call for artists came from an organization called Restart, a Berlin-based social enterprise looking to give refugees a creative outlet, connections to fellow artists and access to an online art marketplace in their new European homes. Modeled after ArtLifting, a Boston-based benefit corporation that sells and licenses the work of homeless artists, Restart hopes to be a resource for creative refugees trying to remake their lives and careers in Europe.

Founder Jonas Nipkow started developing the idea in Berlin after attending a job fair for people he calls “newcomers” — the term he prefers for refugees. He was struck by the fact that most job opportunities there were in manufacturing and service. “I wondered,” he remembers thinking, “where are the programs for creative people?”

The demand was there, and after Nipkow founded the organization in early March 2016, word spread quickly.

“Once we met artists, they knew other artists, and we realized there were a lot of artists among newcomers,” says Nipkow. Within just weeks, in early April, Restart launched its first-ever exhibit in Berlin with the works of five refugee artists. “It was great to see how excited the artists were, not just to be seen as refugees, but, as talented, creative people,” says Nipkow.

Nipkow expanded his organization into Austria after meeting Raffaela Daboval, now the director of Restart Austria, through Impact Hub, a London-based networking organization and business incubator that hosted Restart’s Berlin exhibition. Daboval had previously organized a one-week startup incubator in Vienna, and she was eager to put her experience in the arts and social entrepreneurship to good use. She joined the project in July, and by the end of August, had a team of volunteers working to recruit artists, gather supplies and plan an exhibit.

Daboval says she was surprised by the high turnout at the exhibit opener at the MQ in October. The seven artists featured in the show included some self-taught, amateur artists, as well as some established artists like Sahf Abdulrahman, who previously worked as a children's art teacher and art critic for Syrian newspapers, and Ibrahim Barghoud, who previously taught at the Academy of Fine Arts in Aleppo and whose work has been shown across Europe.

Some of the supplies used by the artists came from Vienna-based artist Gerlinde Pauschenwein, who was approached by a Restart volunteer while teaching a class at the Siemens complex refugee shelter. “As an art therapist, I learned that it's important to give people perspective, especially people who might be losing hope,” she says. The blue-colored pastels she donated ended up with Parmis and now characterize her portrait, “Blue.”

When Parmis saw Restart's call for artists on Facebook, she knew right away she wanted to be a part of it, and Pauschenwein's donations made it possible. Although Parmis had never worked as a professional artist, she had taken some painting classes in Tehran, and she comes from a family of creative people. Her mother is an amateur artist, one sister is a painter, a brother is a building designer and a second sister is in school for architecture. She says she calls her mother once a week, and she hopes that someday she’ll be able to reunite with her family in Turkey, but she doesn’t anticipate going back to Iran unless there’s a major regime change.

Austrian army soldiers observe migrants as they wait to cross the border from the village of Sentilj, Slovenia into Spielfeld, Austria, Nov. 2, 2015.

Painting and exhibiting her work helped Parmis find meaning and purpose amid the challenges of life as a new refugee. But the question of how Austria will manage its role in the largest refugee crisis since World War II remains a complicated one that won’t be answered with a single art exhibition.

Parmis was one of almost 90,000 asylum seekers who came to Austria in 2015. That year, the country of about 8.5 million inhabitants played temporary host to many refugees and migrants passing through on their way to other countries in the European Union, mostly Germany. Most of those refugees were fleeing Afghanistan, Syria and Iraq, according to Austria's Interior Ministry. Austria provides asylum-seekers with some social and financial aid, but they aren’t eligible for many social welfare programs. Many refugees have been unable to find work.

This painting titled, “Pain and Hope,” is by Khaled Dahesh, a Syrian artist and art teacher who came to Austria from Turkey, where he lived for four years after fleeing Damascus. The painting depicts a street in Damascus, empty save for two flocks of doves. “Only birds,” he says. Dahesh doesn’t have a job in Vienna yet, but he wants work. “Suchen, suchen,” he says, in German. “Looking, looking.” In the meantime, he says he plans to paint more, hopefully in order to earn some cash to supplement his limited allowance from the state.

Although the migrants who stayed in Austria make up a small fraction of the country's population, applications in 2015 were more than triple the number from 2014, giving many Austrians the false impression the country was being overrun. Since then, politicians on the far right have capitalized on these fears, and the country’s immigration policies have tightened, with heightened border controls and a new cap on refugees and asylum applications in early 2016. As of November 2016, asylum applications had fallen back down to around 40,000, according to the Interior Ministry.

Parmis says she’s received a mostly warm welcome in Vienna, but acknowledges that not all Austrians are as happy as she is about her arrival. One day, Parmis caught a woman pointing at her on the subway. The woman then told a young girl she was traveling with that Parmis was bad because of her “black hair.”

“She didn’t know that I could understand what she was saying,” Parmis says. “I just looked at this woman and smiled.”

While the larger challenges of the European refugee crisis remain, Restart focuses on its mission. The next step for the organization, both in Berlin and Vienna, is to recruit more artists, gather more resources and ultimately launch an online platform to sell the artists’ work. Restart will charge a 30 percent commission, which will be used for reinvestment in the project. In the long term, the project won’t be sustainable without commissions, Daboval says.

“The idea is to create a network for them,” Daboval says. “When you are an artist, it’s very hard to work because it’s not like a normal job market where you send your CV.”

It’s an ambitious plan, but there’s no guarantee it will work. Pauschenwein is somewhat pessimistic about the viability of the art market for anyone who isn't a big name, but she’s impressed with what the organization has accomplished so far, particularly in snagging the MQ for its opening. The location is “top,” she says. “It doesn’t get any better than that.”

For her part, Parmis has sold two paintings, one for 90 euros ($100) and the other for 120 euros ($134). She’s also given painting lessons to young children in the refugee center, most of whom are from Afghanistan and Syria. Some of the girls from her class are playing handball in the parking lot while we speak, and we can hear them laughing outside her window.

Several flights above them, Parmis has decorated several of her walls with their drawings, which she hangs up alongside her own. Against her closet rests a cello on loan from a local music school, and around her desk, she’s pinned up various German language study guides. In the center of the room, Parmis has lithographs of turn-of-the century Vienna. “Every time I see them, I think, yes, I’m here,” she says. “This is real.” 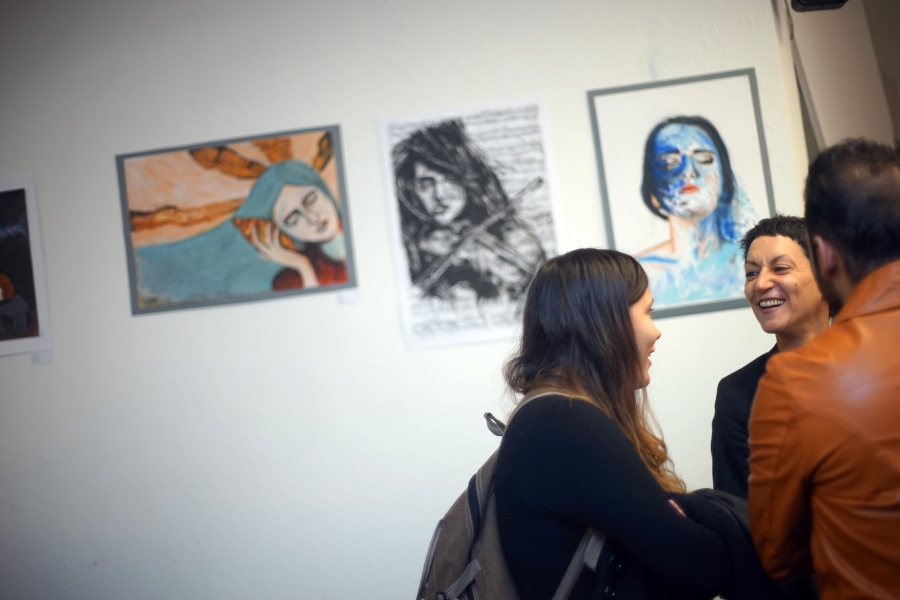