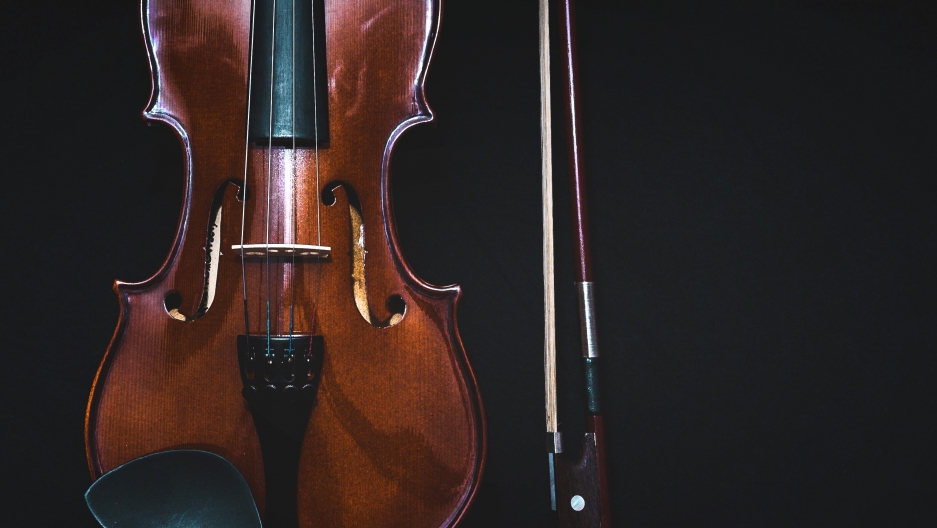 In the movies, a violin is often used to dramatic effect, as a part of the background music.

Imagine what some of the most thrilling films ever made would be like without their musical scores.

"Star Wars" without the crescendo of the opening credits? "The Godfather" minus the brooding background music? We rely on music to immerse us in onscreen drama and heighten our emotional response to characters and plot twists. But when it comes to science films, composing a stirring score can be a tough order. Just ask Darren Fung, who came up with the score for a three-part documentary called the "Great Human Odyssey,” which aired on PBS this past October.

For Fung, the trick to scoring science films has to do with tapping into the material’s emotional appeal.

“You have to figure out a way to tie those sort of abstract ideas, the ideas that don't necessarily have this emotional chord to you, and figure out how to translate that into emotion,” he says.

In the "Great Human Odyssey,” Fung found inspiration in some of the film’s biggest questions, like: “How did we survive through the Ice Age? How did art come to be? How did we move from Africa into Europe?”

“When you take a look at what those emotions are, a lot of it is mystery,” he says. “There’s grandeur to a lot of this stuff. Some of it is incredibly magical. So those are the emotions that you latch onto, and that's where as a film composer … I can really spread my wings and show what I can do with that.”

One cue from the score, called “Change is Constant,” relates to feelings of danger, but, also, resilience. Fung says the clip goes along with a part of the film describing how early humans adapted to survive in an extreme, quickly changing environment. (Listen to clips from the score on Science Friday’s website.)

“The Earth went from wet to dry, and back to wet again,” he says. “How did humans survive all of this, and how did we avoid extinction? It's our ability to adapt. As an example, we talk about humans’ ability to use ostrich egg [shells] to carry and store water. So how do we score to this adaptability?"

“And then, finally, you return to something bigger. We see something almost angelic and miraculous when we talk about the ingenuity and the resilience that helped us realize, ‘Yes, wow! Ostrich eggs can hold and store water,' which is really quite amazing.”

Another clip, called “Dawn of Symbolic Thought,” complements an exploration of Blombos Cave in South Africa, where ancient bone tools and even a 100,000-year-old paint factory have been discovered. Here, the music builds dramatically.

Fung recognizes that his cue for the Blombos Cave exploration is, in essence, a musical backdrop for an archaeological dig. “If you're looking from a typical Hollywood perspective, it's not, perhaps, the most exciting thing,” he says. But then again, some call Blombos Cave the "cradle of the human mind."

“And it's my job to help the viewers realize the significance of all of these things,” Fung says.