Hilda Tresz at the Rostov Zoo in Russia. Tresz works with zoos around the world to consult on animal welfare.

When Hilda Tresz was 17, she walked into the office of the director of the Budapest Zoo and demanded a job.

Laughing, she recalls, “I was a young, ignorant child who doesn't know that [you’re] not just supposed to march into the director’s office and tell him things.” Things like, “Make me a zookeeper.”

Tresz kept at it for a year — and finally, he agreed.

“I think he just did that to shut me up,” she says.

So the day after she graduated from high school, Tresz started work at the zoo.

Hilda Tresz and lions at the Budapest Zoo

She grew up in what she refers to as the "concrete jungle" of Budapest. But every summer, she would go to her grandmother’s in the Hungarian countryside. There were cows, pigs, geese and ducks. That’s where she fell in love with animals.

One time, she realized that there were no lakes or ponds for the ducks. “So what does a good child do? Digs a big hole … fills it with water,” Tresz explains.

She made a pond — well, it was more like a mud puddle.

It was an early sign of what she’d do later in life.

At 26, Tresz and her husband packed two suitcases — one filled entirely with books — left Hungary, and came to the US.

She ended up at the Primate Foundation of Arizona taking care of 85 chimpanzees. And she says the experience changed her life.

“Because they are just like humans,” explains Tresz, who is now 54. “They really are. So they try you in every way” — from scheming to pelt her with poop to grooming her when they decided they liked her. Working with chimps required an entirely new level of problem-solving and patience, and in the process, Tresz became a chimp expert.

Not long after, she moved to the nearby Phoenix Zoo. And there, Tresz started a program around an idea that was gaining traction in the zoo world: behavioral enrichment. She says it’s something that people often misunderstand.

“People think that behavioral enrichment is nothing else but entertaining animals, throwing a toy at them.”

But whether it’s changing the architecture of their exhibit or making animals forage and work for their food, behavioral enrichment is about giving animals items and opportunities that bring out natural behaviors that they’d have in the wild.

“When you give an enrichment item for an animal, it has a choice to interact with it or even not to interact with it," Tresz says. “It’s a big difference. Even with humans, if you have no choice, you feel helpless. You feel hopeless, angry, depressed. It’s the same with the animals.”

In 2006, Tresz gave a talk at a conference about her approach to behavioral enrichment. The next day, she says, the phone was ringing off the hook, and she had a flood of emails from people wanting to know about the program. Since then Tresz has received awards for her work from the American Association of Zookeepers.

Some critics might say that no amount of behavioral enrichment makes up for the fact that the animals don’t belong in captivity. But Tresz points out that most zoo animals were born in captivity, and “they don’t know how to hunt properly, how to take care of themselves properly, so putting them back in the wild is practically executing them.”

If you go to the Phoenix Zoo today, you probably won’t notice any of the behavioral enrichment efforts. It’s the kind of thing you miss unless someone points it out.

Standing near the elephant exhibit, Tresz greets a 7,200-pound Asian elephant with the love and tone of voice you might associate with greeting a puppy.

According to Tresz, elephants have two main activities in the wild: walking and eating.

So the exhibit has uneven terrain and logs strewn about to make the elephants walk and work their joints. There is a swimming pool and mud wallow, and scratching posts and feeders. The elephants have to work at the "puzzle feeders" to get the food out. 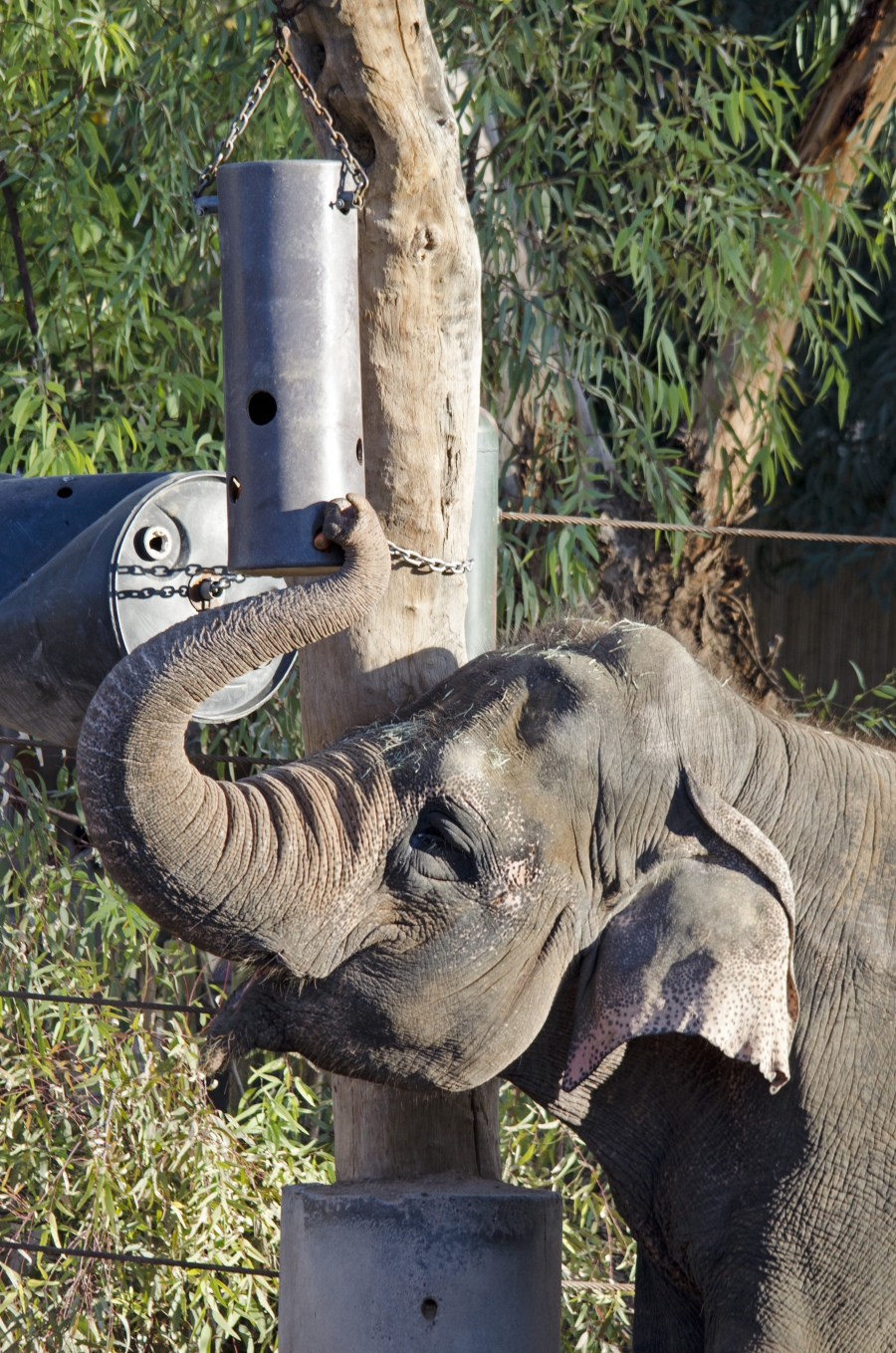 An elephant at the Phoenix Zoo getting a snack from a puzzle feeder.

Courtesy of the Phoenix Zoo

It may not be beautiful to the human eye, but the key word here is functionality.

In 2007, the Jane Goodall Institute contacted Tresz and today she volunteers with them. And in conjunction with the Phoenix Zoo, Tresz now goes to zoos around the world to help with chimp and animal welfare.

Sometimes zoos invite her. Other times, someone reports animal abuse and she gets brought in. In those cases, she says zoo staff are not all that happy to have her there, but by the end of the one week she spends with them, sentiments usually change.

Recently when she left a zoo in Sri Lanka, she says the staff told her, “We would have thought you are a Buddhist, because you are following the lord Buddha’s teaching without even knowing that you are doing it.”

Tearing up, she says, “That made me feel … pretty good about my job. So I think it doesn’t matter how I’m getting brought back to those countries. Because at the end what matters is how I come out.”

Really, she says, it’s just about the animals, making sure they have better lives.