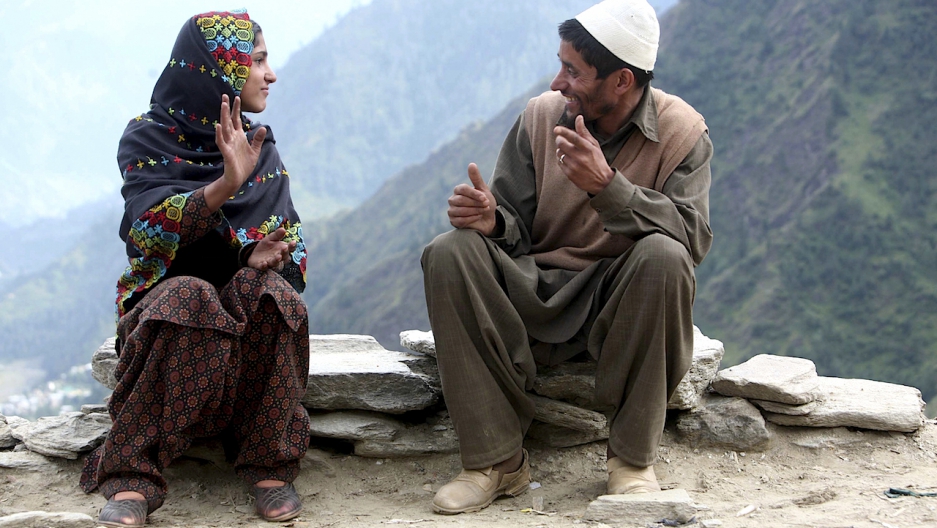 Safran Khatoon (L) and Muneer Ahmad, both of whom are deaf and mute, use sign language to communicate in Dadhkai Village in the Doda district, 162 miles north of Jammu, on June 18, 2009. In their sleepy village nestled high up in the Himalayan mountains, the majority of residents are either deaf or mute.

In September, Rupmani Chhetri sat in a circle of people in a park in central Delhi. As she signed rapidly, those around her practiced the basic words they had learned over the last few months.

“People can easily listen to and learn other languages, but they don’t try to learn sign language,” signed Chhetri, who is deaf. “Every communication I have with hearing persons is very short because the interpreter also has trouble communicating as quickly.”

There are only about 250 certified sign language interpreters in India, translating for a deaf population of between 1.8 million and 7 million. (The wide range in population estimates exists because the Indian census doesn’t track the number of deaf people — instead, it documents an aggregate number of people with disabilities.)

Chhetri and other deaf and hearing volunteers are looking to bridge this gap, one sign at a time.

Every Saturday since April, Chettri and 15 to 20 others have met in Delhi’s public parks to teach and learn basic sign language for free. They are among about 1,000 volunteers in five Indian cities who gather regularly for "Finger Chats," an initiative of the NGO Enable India.

“Both my parents are deaf, and Indian Sign Language is my mother tongue,” said Sarah Sharma, who volunteers at Finger Chats sessions. “It makes me happy to see all of these people signing and learning.”

Sharma is also part of a society called Children of Deaf Adults (CODA). While members of CODA are fluent in Indian Sign Language and often in American Sign Language as well, they cannot be certified interpreters without completing a mandatory nine-month diploma training.

But the mainstreaming of Indian Sign Language faces many more roadblocks, the biggest one being the lack of official recognition.

People sign in small groups during a "Finger Chat" gathering in Bangalore.

“We are a multilingual nation, and we need to look at the deaf community as a linguistic minority,” says Ruma Roka, the founder of the NGO Noida Deaf Society. “ISL needs to be accepted as another Indian language, and the effect of that recognition would percolate to schools, universities and parents.”

In December, a revised bill on the rights of persons with disabilities was passed by both houses of parliament. Among other things, the new law reserves 4 percent of government jobs and seats at educational institutes for people with disabilities. But the law does not include specific measures for the deaf, nor does it mention Indian Sign Language or its promotion.

Volunteer Sangeetha signs the letter "P" at a Finger Chat in Bangalore.

The Ministry of Social Justice and Empowerment does oversee the Indian Sign Language Research and Training Centre, which is currently compiling a crowdsourced ISL video and print dictionary. The ministry’s Department of Empowerment of Persons with Disabilities runs programs like a job search portal for the hearing-impaired, and a program for the prevention and control of avoidable hearing loss. Currently, there are close to 400 government-funded schools for the hearing-impaired across the country.

However, over 12 years of work with the deaf community in India, Roka has found a troubling pattern at schools as well as in society. Often there’s an emphasis on training the deaf to accommodate the hearing community — by forcing speech therapy, written communication and lipreading — while discouraging sign language. Unaware of how they sound and conscious of the reactions of hearing people, many deaf students are too uncomfortable to attempt speech. Language ability is also often stunted, as the deaf are forced to communicate in a language they know only partially.

“Since we have systematically created barriers in their way, the onus also stays on us to break down those barriers,” says Roka.

“Deaf kids go through 12 years of school without learning anything,” she continues. “The education system urgently needs to be updated to make the development of social and life skills easier as well.”

And this is before factoring in India’s high illiteracy rates — close to 26 percent according to the 2011 census — and the many villages short on public services.

“I met a boy who is deaf and who didn’t even know any sign language, he had no method of communication,” says Vishnu Soman, who works with Enable India on improving deaf people’s access to the workforce. The boy was brought to an outreach program when his relatives learned that he could get a job through the organization.

According to several social workers, deaf Indians who cannot access formal education learn signs primarily when they meet other deaf people. As Indian Sign Language is not formalized or widely taught, however, the signs themselves vary widely across regions and states.

“The way there are so many different dialects in oral language, sign language has a lot of variations,” says Aparna Dass, a program head at Enable India who has worked in the disability sector for 14 years. “A sign I use at home may not be used outside, but ISL can allow people to communicate across the country.”

For now, government programs focusing on skill development for people with disabilities, and the improvement of physical and workforce accessibility are seen as steps in the right direction. However, Dass emphasizes the need for awareness campaigns to make India’s deaf community known to the hearing majority.

“People at the policy level should be exposed to places where the deaf are working and learning,” says Dass. “National organizations for the deaf are limited to Delhi and Mumbai, but they need to be scaled up and replicated across the country.”