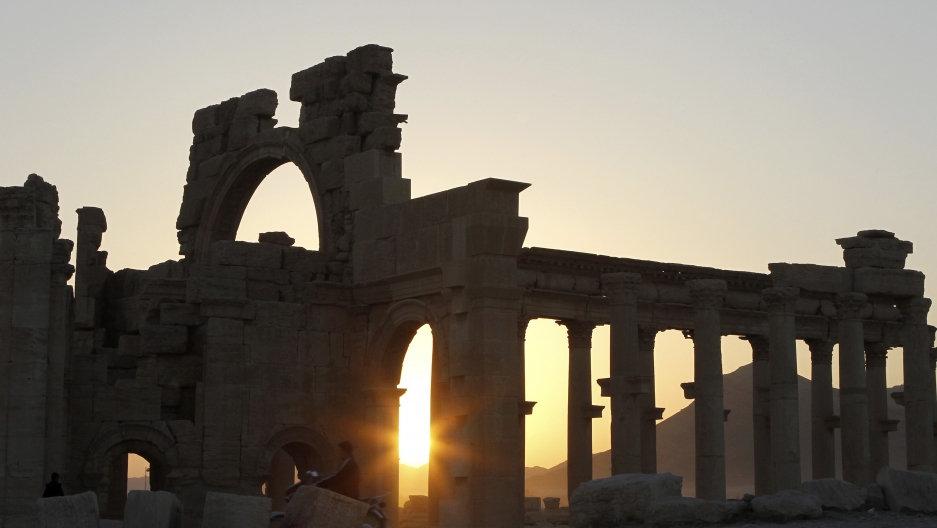 The sun sets behind ruined columns at the historical city of Palmyra, in the Syrian desert, some 240km (150 miles) northeast the capital of Damascus November 12, 2010.

Take the ancient city of Palmyra. ISIS militants destroyed part of it, and they rigged many of the sites there with explosives before they were driven out last spring.

So an architect working with the Syrian government had an idea: Send in a drone.

The result is an art exhibit, “Eternal Sites: From Bamiyan to Palmyra,” on display in Paris. French President François Hollande opened it, and The New York Times reports that he “described the works as ‘an act of resistance’ against terror and intolerance.”

How it got to Paris was a story itself. “The situation wasn’t very stable,” says Yves Ubelmann, co-founder of Iconem, the group behind the project. “It was difficult for us to stay on the site.”

But in the little time they did stay, much was done. Ubelmann says they used a drone that could take thousands of photographs per hour. It gave them plenty of data for use in recreating the ruins with 3D printing.

“We use a specific algorithm that is able to reconstruct a 3D model based on 2D pictures,” he says. “So we can put into this program the thousands of pictures and create a model of Palmyra that is picture-perfect.”

Ubelmann believes that heritage can be rebuilt digitally. He also says it’s a way to combat ISIS propaganda.

“We use a picture to show how nice these sites are. And I also think it’s a response to violent people who try to destroy sites like Palmyra and Bamiyan [in Afghanistan],” he says. “The problem is that this destruction is the result of ignorance. And if we give these people the culture and a way to love this heritage I think we can fight violence in this way.”

As for Palmyra, it’s still in a war zone. But Ubelmann hopes his team can return and protect what’s left.