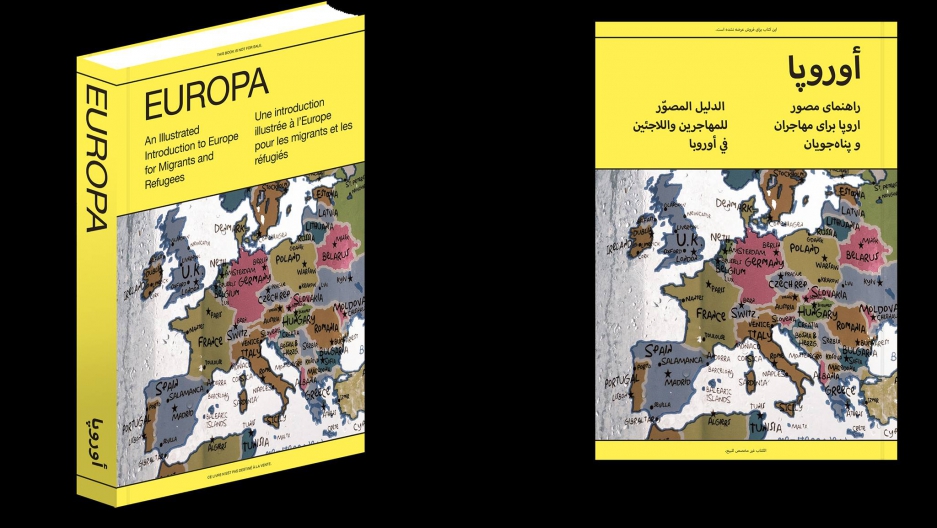 "Europa: An Illustrated Introduction to Europe for Migrants and Refugees" tells the story of European immigration.

Courtesy of the Arab Fund for Arts and Culture

The thick, colorful book titled, "Europa: An Illustrated Introduction to Europe for Migrants and Refugees," aims to broaden the perspectives of Europe's newest immigrants, with plenty of historical photos, maps and individual accounts and factual information.

That's according to Alia Malek, a Syrian-American journalist who was one of the book's editors. Overall, the guidebook tries "to introduce Europe to people who [are] arriving now, through the lens of conflict and migration. It tells the story of the last 100 years of Europe as it was formed because of these two forces that you tend to find together — conflict and then the displacement that it causes," says Malek.

"The idea was that by telling this version of Europe to people who are coming from places that are facing the same kind of destruction Europe witnessed not even 100 years ago, that there might be a way to recognize some of their experiences in this ‘other.’”

Malek says she’s encountered many refugees who had varying degrees of understanding as to what awaited them in Europe, and in many cases, they didn't realize that Europeans had gone through similar experiences.

“I had the most surreal conversations. People would say to me — because there is a lot of waiting, walking and a lot of sitting in fields — things like, ‘What happened in Syria and Iraq has never been seen before in human history, the way neighbor turned on neighbor, the way the very fabric of society came apart has never been seen in human history,’ and we were having these conversations on the border of Croatia and Serbia, a border that we had to be very careful on because they were still land mines from the Yugoslav war.

"So there was irony in that for me. The reality is actually there's not such a dissimilar history and we were walking it as we spoke,” says Malek.

"Europa," according to its website, is also designed to be a practical guide for migrants and refugees, so it's written in four languages: Arabic, Farsi, English and French. There are sections explaining Europe’s different political systems, geography and traditions, as well as popular films and books of interest, and there’s a helpful list of organizations that offer assistance to migrants and refugees.

A new guidebook/photobook aims to inform refugees about Europe: https://t.co/cCBVI3eHJN

"Europa" also features first-person testimonies — from residents, immigrants and refugees, old and new — who tell personal stories in their own words of “war, solidarity and reconciliation,” says Malek.

“We have the story that I love of the Greek grandmothers who themselves are the daughters of Ottoman Greek refugees who fled out of the Ottoman Empire as it came apart and resettled on islands such as Lesbos, and then almost a century later, they’re helping Syrian, Iraqi and Afghan women arriving with their own children … we also have the oral histories of people who have made the journey like an Afghan doctor, who, all he ever wanted 10 years ago was to get to Greece because Greece is where the Hippocratic oath came from, and he’s now a practicing doctor in Greece and he’s working with refugees … we have architects from Syria who really wanted to get to the Netherlands, and now they want to take their ideas of urban planning that they're seeing in Amsterdam back to Syria."

Over her several years of reporting on immigration and editing "Europa," Malek says she’s been inspired by the immigrants she’s met along the way:

“You know you’re always horrified by the negative reactions, but I have been moved and pleasantly surprised by the warmth and the openness of people’s hearts, not just volunteers who rush out to the train stations to meet people, but people who have an openness in their hearts, or they knew about their grandmothers, their uncles or their aunts — that at the same time that I was so devastated by the failure of humanity to learn its lessons, my heart was moved, and it was compelling to see how many folks also do see something in what is happening that isn't as much of an ‘other’ experience as the loud politicians would make us think.”

A free, electronic version of the book, optimized for mobile devices, is available online in all four languages.