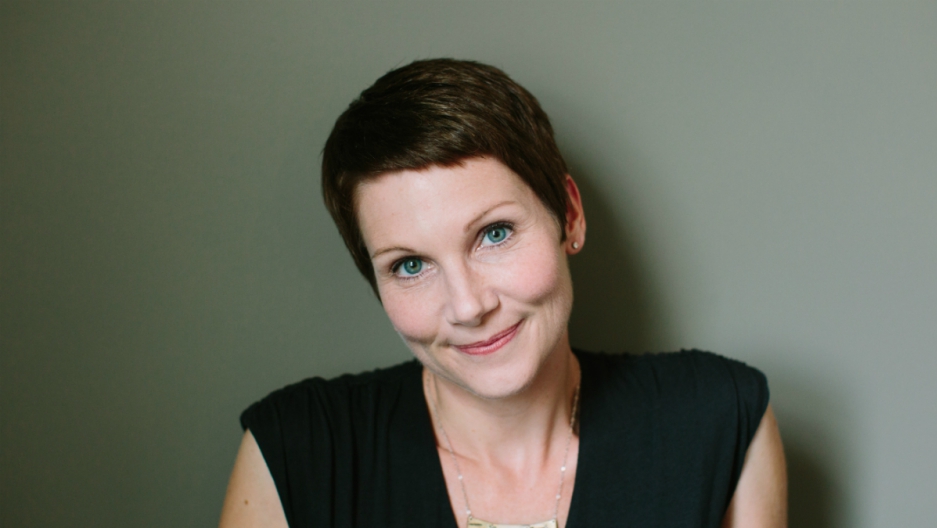 Maggie Smith's forthcoming book of poetry is called "Weep Up."

This has been a tough year.

All sorts of news publications have even asked if it was the “Worst Year Ever.”

In the aftermath of many of these tragic or difficult events, there has been one poem — consistently shared over and over again.

According to some estimates, it has been read by nearly a million people.

The poem is called “Good Bones," by Maggie Smith, a poet in Bexley, Ohio.

It’s about making the most of a world that is far from perfect.

Life is short, though I keep this from my children.

Life is short, and I’ve shortened mine

in a thousand delicious, ill-advised ways,

I’ll keep from my children. The world is at least

estimate, though I keep this from my children.

For every bird there is a stone thrown at a bird.

For every loved child, a child broken, bagged,

sunk in a lake. Life is short and the world

is at least half terrible, and for every kind

stranger, there is one who would break you,

though I keep this from my children. I am trying

to sell them the world. Any decent realtor,

walking you through a real shithole, chirps on

about good bones: This place could be beautiful,

right? You could make this place beautiful.

Smith’s poem was first published in the online literary journal Waxwing in June 2016, a couple days both after the shooting at Pulse nightclub in Orlando, Florida, and after the murder of British politician Jo Cox in West Yorkshire.

“It was sort of this perfect storm of terrible things happening in different places,” says Smith.

Her poem travelled across the internet like wildfire, re-shared by people both in the UK and the US.

It was also interpreted by a dance group in India, translated into Spanish, Italian, French, Korean, Tamil and Telugu to name just a few of the languages. It was even turned into a musical score.

After the US presidential election, on November 10 and 11, Smith’s poem started getting traction all over again. It was one of the most shared poems on the internet, according to the Academy of American Poets, along with Maya Angelou’s “Still I Rise” and W.H. Auden’s “September 1, 1939.”

Smith feels proud of her poem’s popularity, of course, but also a little conflicted.

“It’s a weird thing,” she says, “to have your poem’s success, and in turn your success, be tied to something that is shared because things are terrible.”

And even though "Good Bones" was published in the summer of 2016, Smith had actually written it a year previous, and she wasn’t thinking about world events at all.

She was thinking about her family.

“It was a poem written from the point of one mother feeling anxious about how to raise kids, and explain a world to them that is as wonderful as it is terrible,” says Smith. "How to keep the worst parts from then while they’re young, while not lying to them.’’

After finishing the poem, Smith sent it to some journals, got a few rejections, and never dreamt it would become as popular as it is today.

“When I wrote the poem,” Smith says, “I didn’t even think it was one of my best poems.”

Maybe “Good Bones” took off like it did because this has been a year of people turning to poetry with a particular sort of urgency. That makes sense to Smith.

“To me in times like this, empathy is the one thing we really need to have,” she says. "I think poems are sort of empathy machines, they’re there to help us see other people’s points of view.’’

She still hasn’t told her kids that the world is at “at least fifty percent terrible,” though.

“My 4-year-old-can’t read yet, so he is completely in the dark,” Smith admits, with a laugh.

Her daughter, though, is 8, and she has read the poem. They’ve discussed it, a little.

“She was really disappointed in the outcome of the election, and we have talked a little bit about when things don’t go our way how we can work small to make big change," says Smith. “Just doing your best at school, and being kind to others, if we all do those small things, it will make a difference. So that’s sort of my explaining it to an 8-year-old version of things.’’

Smith sounds just as commited as when she first wrote her poem to selling the world to her children.