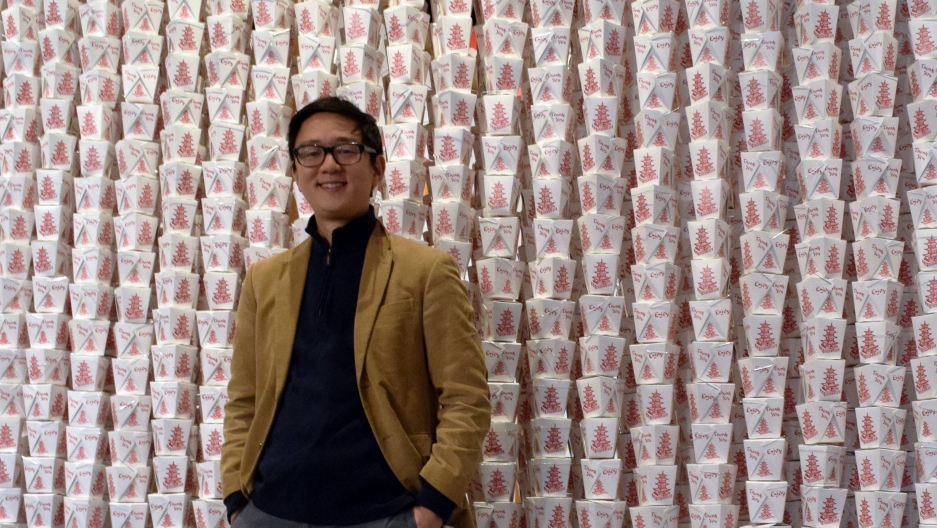 Peter Kim is pictured here at the Museum of Food and Drink's new exhibit on the making of the Chinese-American restaurant.

There are about 50,000 Chinese restaurants in America — more than three times the number of McDonald’s in this country.

Most of these restaurants are independently owned, but there’s a sameness to them: the takeout boxes, the fortune cookies and often, the same menu, with chop suey, lo mein and egg foo young.

These aren’t really the foods that people eat in China. But they’re cooked by recent Chinese immigrants in restaurants around the country.

How this came to be is explored in a current exhibit at the Museum of Food and Drink in Brooklyn called “Chow: The Making of the Chinese American Restaurant.”

It’s a story that’s personal to me. My family has owned and worked in Chinese restaurants around Boston for more than 30 years. I spent many afternoons doing my homework in the corner booth and sneaking Peking ravioli from the kitchen. From my perspective, it was long hours, low wages and clothes that always smelled like food. It was respectable work, but not glamorous.

I never thought this life was museum worthy.

But Peter Kim, executive director of the Museum of Food and Drink, is proving me wrong. He and his team have created a full sensory experience: the sight of a floor-to-ceiling curtain of Chinese takeout boxes, the smell of fresh-baked fortune cookies, menus under museum glass and clean, modern visuals.

Kim is taking a critical lens to chop suey and egg drop soup to tell the story of how Chinese immigrants created a great American comfort food. It starts with giving the food some respect.

“One thing we never want anybody to say again, coming away from this exhibition, is that Chinese food is in any way a fake cuisine. It is just its own cuisine,” he says.

Chinese-American cuisine dates back to the mid-1800s when Chinese migrants came over to work during the Gold Rush. They took traditional Chinese dishes and adapted them, serving them up sweetened and fried to fit American palates.

The food and flavors evolved through the waves of Chinese immigration. You can see that history on any Chinese takeout menu if you know what you’re looking for.

Cantonese immigrants from the 1800s created dishes like egg foo young and egg rolls. Kung Pao chicken and Ma Po tofu came in the mid-1900s, with people from Hunan, Szechuan and Taiwan. Sesame noodles came with the current wave of Fujianese immigrants. And some of what’s on the menu now — pad thai, steamed diet dishes — is not Chinese at all. It just fits the gestalt.

Chinese-American food is a story of adaptation and success. But it’s not all sweet — it’s bitter, too.

The Chinese who came over during the Gold Rush faced racism and violence. They were so hated, that the US passed the Chinese Exclusion Act of 1882, severely restricting immigration for more than 50 years. Kim says early Chinese restaurants “allowed Chinese immigrants to stay in the US when nobody wanted to hire them, when people thought the Chinese were subhuman.” It was a way for Chinese Americans to survive.

The West Coast was hostile, so they fanned out north, east and south, starting restaurants in cities and towns across America.

It’s taken a long time, but as an immigrant population, we’ve won over hearts and minds, one pu pu platter at a time.

On a local level, Chinese restaurants are still tools for survival.

“A lot of times people will tell me, ‘Look, my education was paid for in fried rice and lo mein. My parents sweated, and worked in this restaurant and sold these dishes, and that is what allowed us to climb the ladder of economic opportunity,’” says Kim. They’re the engines that power the American dream.

These are historic menus and posters from MOFAD's show on the evolution of Chinese-American cuisine.

In New England, where I grew up, New Year’s Eve is the biggest day of the year for Chinese restaurants.

Every year, my family gets together at the restaurant to help out. We take hundreds of takeout orders, wash dishes, bus tables and mix hot mustard and duck sauce. It’s our New Year’s tradition.

Sometimes it’s a chore to spend New Year’s Eve packing takeout. But the exhibit put it in context for me.

Most Chinese restaurants are owned by recent immigrants. As their kids succeed, they sell the restaurant to newer Chinese immigrants. It’s a cycle that my family is part of.

There’s optimism and uncertainty in the immigrant experience. And we only have a few more years of our New Year’s Eve ritual before my dad passes the restaurant to another immigrant family, looking to make its way in America.