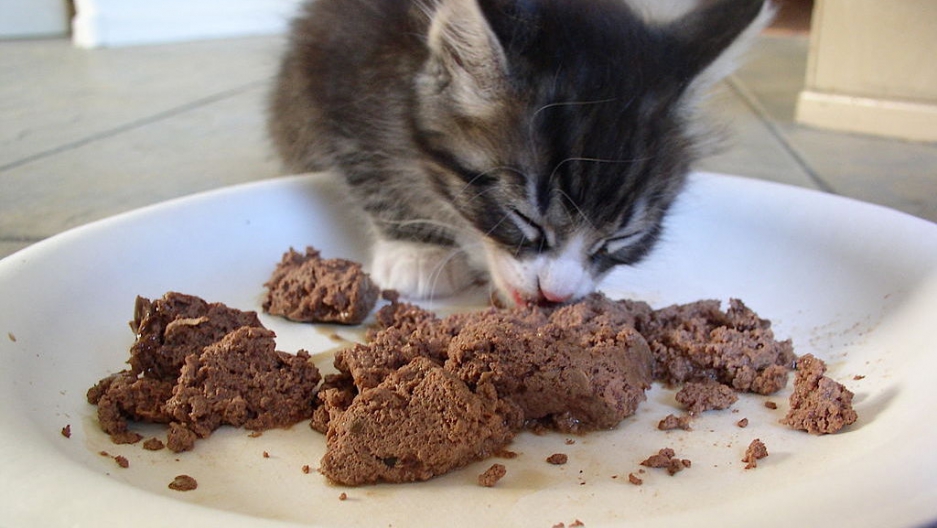 It's just about impossible to know where all the fish on your kitty's plate came from.

Crack open a can of seafood-flavored cat food and whiff that fishy broth. Now try to guess where those gloopy bits of meat originate.

It’s a futile task. Oftentimes, no one knows quite how they got there, or who hauled those fish aboard which boat. Not even the multinational corporations who sell it on supermarket shelves.

Sure, pet food conglomerates can tell you which factories ground up the fish. They know who mixes in the additives, like tricalcium phosphate, and then dumps it into a can.

But the men who actually yanked it out of the sea? They’re usually anonymous, obscured by a murky supply chain.

That’s unfortunate. Because much of the pet food sold in the West is supplied by a Southeast Asian seafood industry, centered in Thailand, that is infamous for its use of forced labor.

For years, this industry has been scandalized by reports of human trafficking and even outright slavery. The victims are men from Myanmar and Cambodia, duped by human traffickers.

Here’s how the scam works. Traffickers promise desperate men a job on a factory or farm in Thailand — a relatively prosperous country compared to its poverty-stricken neighbors.

But there is no legit job. The victims are instead forced onto squalid trawlers. Once the boats leave port, they enter a lawless sea, and the men are forced to toil without pay — sometimes for years on end.

As one escaped ex-slave from Cambodia named Kim Net told PRI, beatings and murder are routine amid the anarchy of the open waters.

“One guy misunderstood an order and got clubbed with an iron bar,” Kim Net said. “His arm snapped. There was blood everywhere. He just went back to sorting fish. It was either keep working or get shot.” 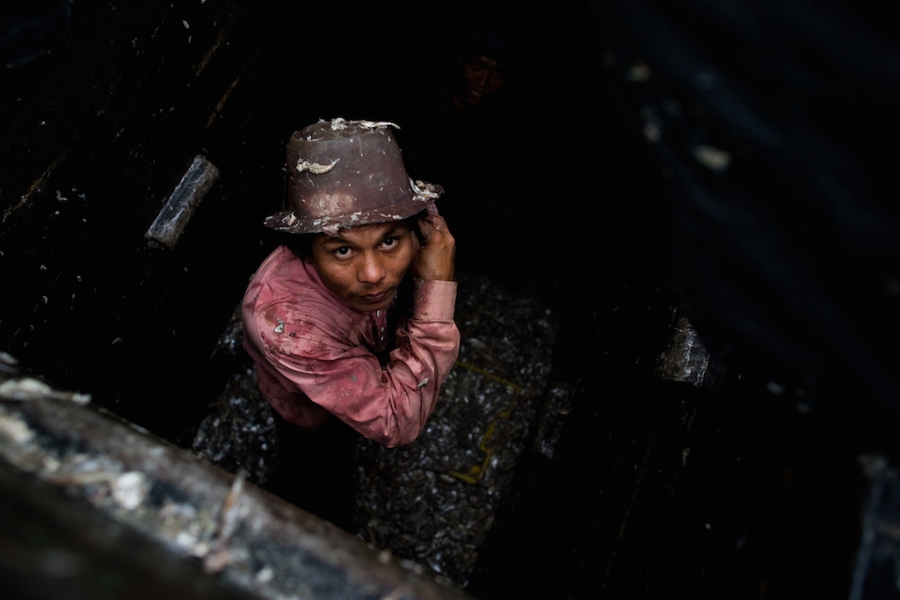 A laborer from Myanmar works in the hull of a Thai fishing vessel. Trash fish caught by forced laborers is a key ingredient in fish sauce, pet food and shrimp feed.
Credit: Nicolas Asfouri

In recent years, various watchdog groups have attempted to track fish caught by abused fishermen to see where it ends up. Greenpeace is the latest to unveil its findings.

Their investigation followed a trawler filled with 30 Cambodian men trapped in forced-labor conditions. All had contracted an ailment associated with malnourishment and extreme toil: Beri Beri disease, a B1 vitamin deficiency. Five were ultimately killed by the illness.

Their misery was discovered in early 2016 when the boat returned from fishing in the middle of the Indian Ocean. Fish from that trawler, according to Greenpeace, ultimately ended up in Thai factories — and some of them routinely supply ingredients to major pet food brands sold in America.

One of the brands is Fancy Feast, produced by Nestle Purina PetCare, based in St. Louis. The other is Meow Mix, produced by the Ohio-based J.M. Smucker Company.

Nothing indicates the makers of Fancy Feast or Meow Mix are the sole offenders. They just happened to source from factories staked out by activists.

Unfortunately, the problem is much, much larger than two companies.

A growing body of research into Thailand’s seafood trade indicates fish tainted by abuse ends up in a variety of products shipped to America and Europe.

The products most strongly implicated in labor abuses include fish sauce, fish oil pills and fish sticks. Shrimp, though farmed on land, are indirectly implicated when they’re fed mushed-up fish caught by slaves.

And then there’s cat food. 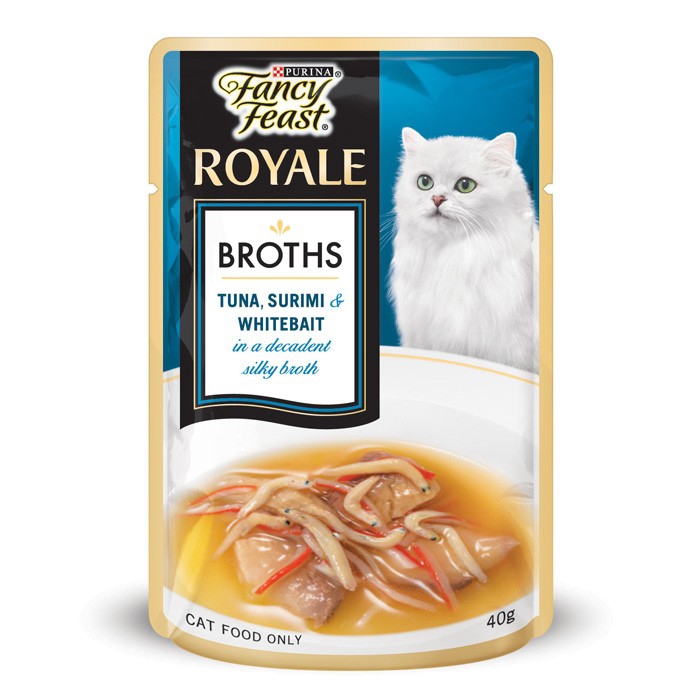 American cats eat loads of pre-packaged food supplied from Thailand. In 2015, according to the United States Department of Agriculture, the US imported more than $190 million worth of cat and dog food from the country — much of it seafood-flavored and flecked with bits of marine life caught by Thai vessels.

Fish caught by abused men is seeping into this cat food supply chain, according to Mark Dia, a campaign manager for Greenpeace Southeast Asia. It’s being mashed up into a paste called “surimi,” which is then ladled into pet food.

“Surimi is an amalgamation of different species caught in trawlers,” Dia says. “They combine all the fish, fillet them and then shape it into the crab stick or cat food that we buy.”

But it is impossible to crack open a can of cat food and say which glob of meat was caught by a starving Cambodian. The dodgy fish and the legit catch is all jumbled together out on the open sea.

Thailand’s $7 billion fishing industry deploys thousands of trawlers each year. Most are not complicit in cruelty. But many are — and tracking them down is horrendously difficult. After all, they’re often motoring around, thousands of miles from civilization.

It doesn’t help that these trawlers can indefinitely remain in remote waters that are difficult to police.

The trawlers can stay at sea for more than a year. They get resupplied by massive boats — called “motherships” in Thai — that provide fuel, food, water and booze. The trawlers never need to dock on land. They can simply pull up to a mothership, which functions like a floating city center. 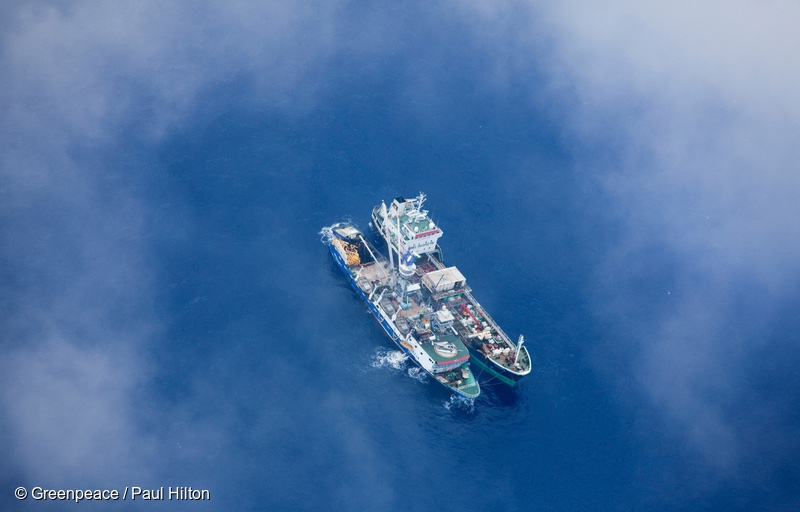 This is what a mothership looks like. It's basically a floating city center for trawlers on the open water.

This provides sea slaves few opportunities to escape. In fact, on motherships, captives can be traded around like chattel.

As one deputy boat captain of a Thai trawler explained to PRI: “Once a captain is tired of a [captive], he’s sold to another captain for profit. A guy can be out there for 10 years just getting sold over and over.”

Each mothership contains a massive freezer room. Trawler captains fill these chambers with tons of sea life. This is where fish netted by slaves can mix with legitimate catch.

Once the mothership carries it all back to shore, there is no way to identify which sea creatures were handled by captives. It’s all a big mess of fish, bought up by factories and processed into products bound for American plates.

Many Western conglomerates still have these opaque mothership transactions — known as “trans-shipments at sea” — in their supply chains. And if they do, they have no way of proving that their products are not enmeshed in slavery.

This has compelled Nestle — one of the planet’s largest food conglomerates — to veer away from this method altogether.

Given the “opaque nature of offshore fishing practices,” Nestle Purina “supports banning all trans-shipments at sea,” says Keith Schopp, the corporation’s vice president of public relations. “Forced labor and human rights abuses have no place in our supply chain.” 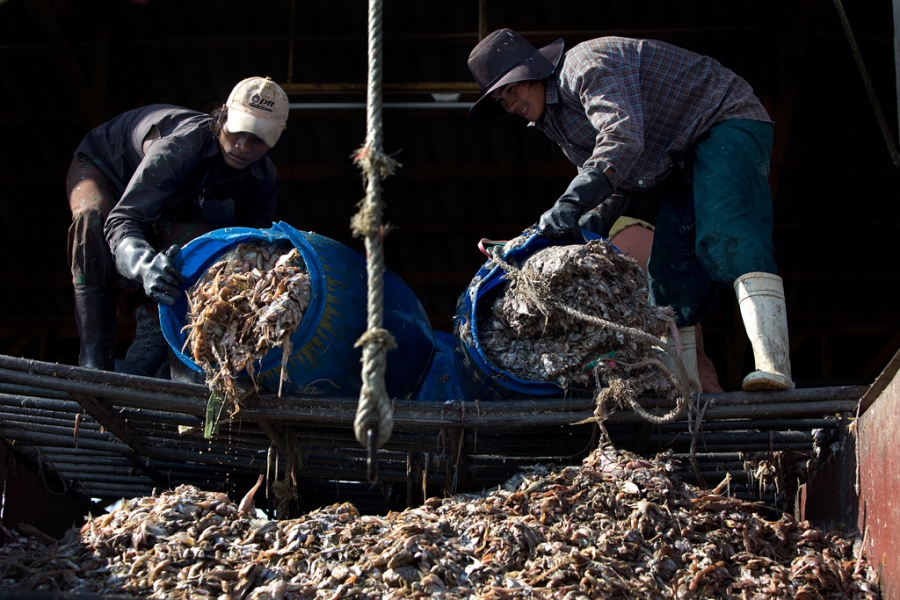 In late 2015, Nestle actually admitted that its own internal investigations turned up forced labor in its seafood supply chain. This sort of corporate confession is rare — and has, in fact, generated lawsuits from irate American consumers.

These days, Nestle insists that “over 99 percent of the seafood ingredients” it sources from its Thai-based seafood supply chain can be traced back to clean sources.

Yet Greenpeace’s accusations suggest that, despite Nestle’s efforts, fish caught by forced labor victims could still be sneaking into its cat food.

Nestle is refuting this. According to Schopp, “our Thai seafood suppliers have confirmed to us that they have not purchased any products from the boats” tracked by Greenpeace.

This dispute is typical of a Thai seafood industry that remains murky despite the glare of lawyers, activists and corporations fearing the next PR nightmare.

Greenpeace’s advice to consumers? Demand that your supermarket stop stocking cat food from companies that still rely on untraceable fish.

The J.M. Smucker Company, makers of Meow Mix, did not respond to PRI’s requests for comment. The corporation was sued in late 2015 in a class-action lawsuit filed by consumers, whose attorneys contend Meow Mix is effectively “supporting and encouraging slave labor.”

As for these mysterious motherships — an integral part of Thailand’s massive seafood industry — Thailand’s government intends to clean up their reputation by placing trained monitors on board the vessels. The observers’ mission, according to the government, is seeking out abuses both on the mothership and the trawlers that pull up alongside them to offload fish.

Anyone caught breaking the law could potentially face crushing fines — such as $22,000 for using an illegal worker. But it will remain extremely difficult to nail down unscrupulous boat captains, churning through international waters, wielding tyrannical power over their subordinates.

There are tens of thousands of motherships and trawlers to monitor. And so far, only a handful of observers have been trained for the job.