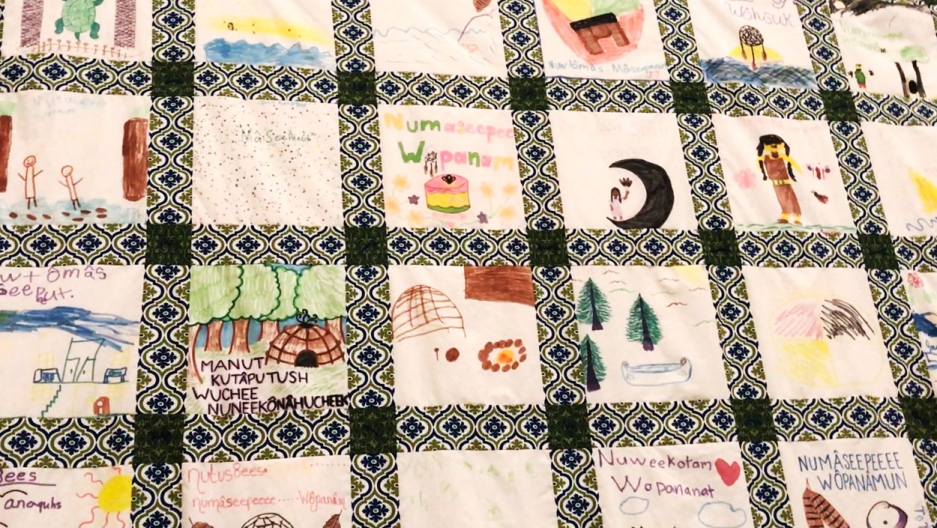 Kids apart of the Wopanaak Language Reclamation Project created this quilt during the "Summer Turtle Program." It's a three-week summer program that serves Wampanoag tribal youth from ages five to 13 and exposes them to their Native language set within a cultural context.

Wampanoag is a Native language of Massachusetts and, like many Native American languages, it's fighting to survive.

The Wampanoag nation of Massachusetts and Rhode Island has more than 2,000 tribal members, but until recently, none of them actually spoke their own language.

The Native tongue disappeared soon after English settlers arrived in the area in the 17th century.

"There was a very brief period where Wampanoag and English co-existed, but unfortunately the great migration happened. Tens of thousands of English immigrants poured into New England and largely began to displace Wampanoag people from their homelands," said Jennifer Weston, immersion school developer for the Wôpanâak Language Reclamation Project. Wôpanâak is how the tribe spells the name of their language; Wampanoag is the spelling that's used in English.

"The language, it persisted for awhile but it really did start to fall off by the mid-1700s. There was a very long period of time where the language really only existed as a written record," she added.

But after lying dormant for centuries, the Wampanoag language is finally waking up. That's thanks to Weston's project, based in Mashpee, Massachusetts.

"The Wôpanâak Language Reclamation Project was founded about 22 years ago to reclaim the Wampanoag language and return it as the principle means of expression to tribal households," Weston said. The WLRP serves four Wampanoag tribes in Massachusetts: the Aquinnah, the Assonetband, the Herring Pond and the Mashpee.

WLRP has been able to bring back Wampanoag through linguists trained by the program. These experts managed to reclaim the Native language from written texts, including a 17th-century King James Bible, letters, wills, deeds and other documents belonging to Wampanoag people. There are now 15 adult speakers of the Wampanoag language and around 75 children at various levels of fluency. 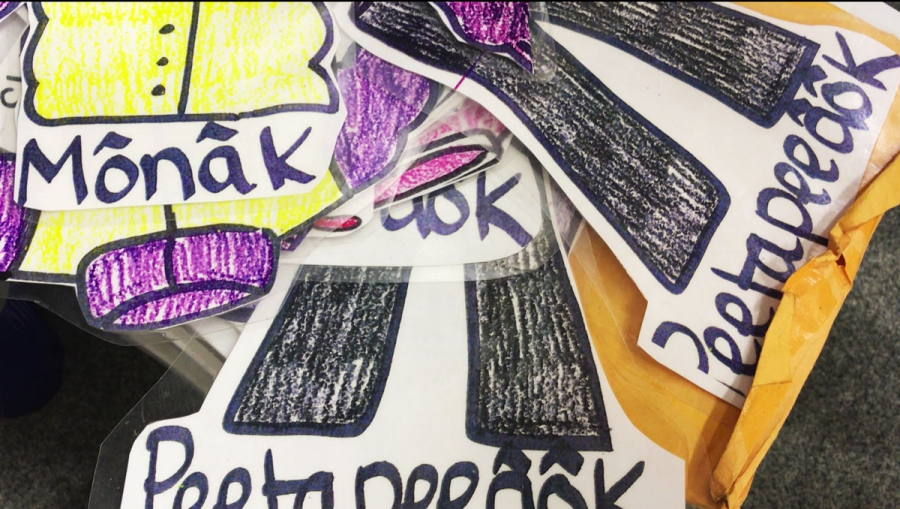 As a way to teach kids their Native Language, teachers apart of the Wopanaak Language Reclamation Project translate common objects into Wampanoag. These drawing feature pieces of clothing translated into Wampanoag.

The project operates several language programs geared toward helping tribal members learn to speak Wampanoag, but its main focus is on youth ages 2 to 16.

Six teachers work with WLRP, and they've developed thousands of lesson plans in the Wampanoag language. One of the WLRP's Native youth programs is called Neekun, which means "our house" in the Wampanoag language. Weston describes it as a means for Native youth to learn the language through fun activities — which is more effective than rote learning, especially after kids have already spent a full day at school.

"We try to keep it activity based," she explained.

Neekun started in 2015, and it is one of four youth-based programs hosted by WLRP.

Within the programs, the kids are always trying to learn ways to easily incorporate the Wampanoag language into their daily lives. This is why one of the first things they learn is how to introduce themselves. 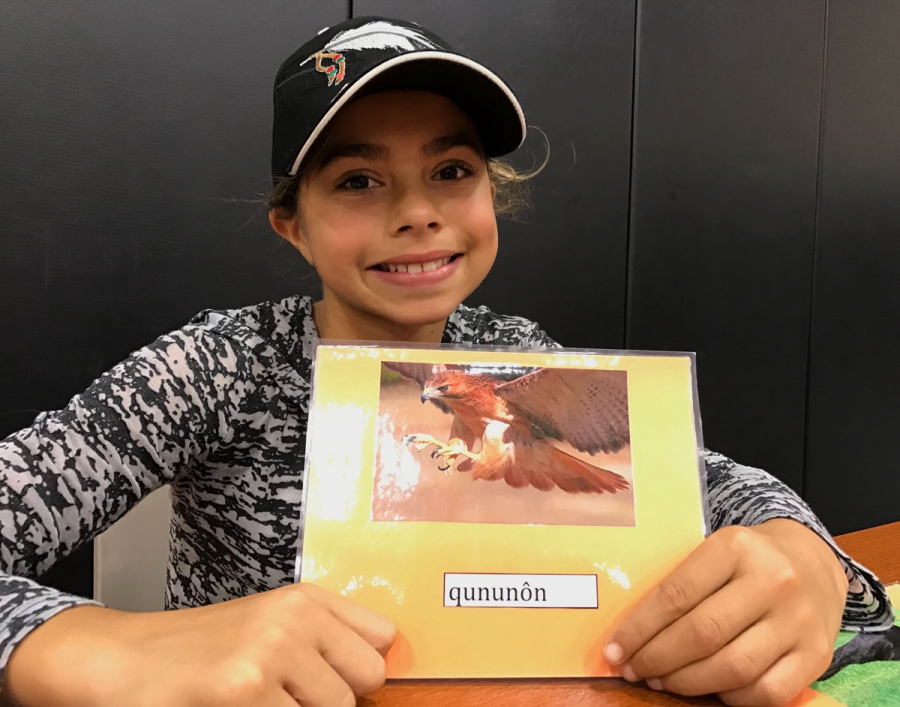 Amyiah Peters, 12, from Mashpee, Mass. has been learning to speak Wampanoag for the past six years, saying it's a privilege for her to learn.

One of the students who introduced herself during The World's visit to the Neekun program was Amiyah Peters.

Peters, 12, lives in Mashpee, Massachusetts, and has been learning the Wampanoag language for the past six years.

"I learn it because I love our culture and I want to know more about it," Peters said, which is why she pays attention whenever the teachers give new lessons.

Weston credits the linguists and linguists-in-training at WLRP for doing the hard work of laboring over original texts so they could create a dictionary and curriculum, as well as age-appropriate materials and activities for children. 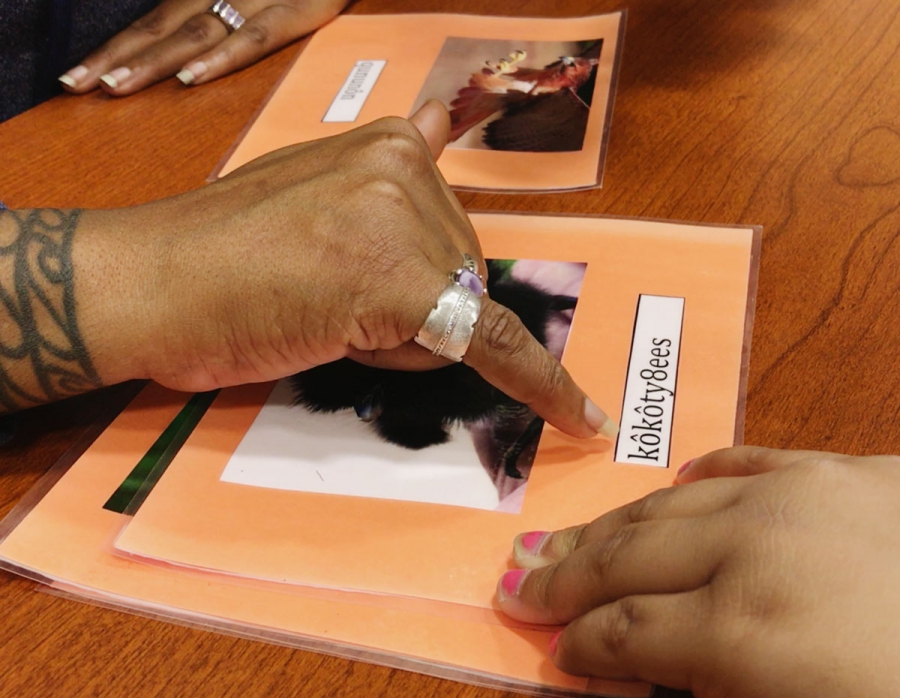 Teachers have developed animal flash card with their names translated to the Wampanoag language. They use the flash cards to teach the youth how to say animal names in Wampanoag.

"I think playing the games in the language is a way of getting them to want to learn it and want to know what's the next thing," she said.

Coombs has been with WLRP since 2012. Most of the kids she teaches today have been with her for several years, and she's noticed their fluency grow.

"As a teacher, it's my responsibility to kind of just keep enforcing it and just letting them hear it," she said of the Wampanoag language. "It's been quite a journey but I feel that the children are grasping [the] language and we have to figure out ways to get them to do that."

Ultimately, Coombs wants the children to take pride in learning and speaking their Native language.

"When we talk about any culture, language is the first part or foundation of a culture. I want them to be proud of learning to speak their language," she said. "Not just learning it but just speaking it on a regular basis just like we do English."

More information about the Wopanaak Language Reclamation Project can be found here.

Correction: A previous version of this story misstated Jennifer Weston's title. She is the immersion school developer for the Wôpanâak Language Reclamation Project.