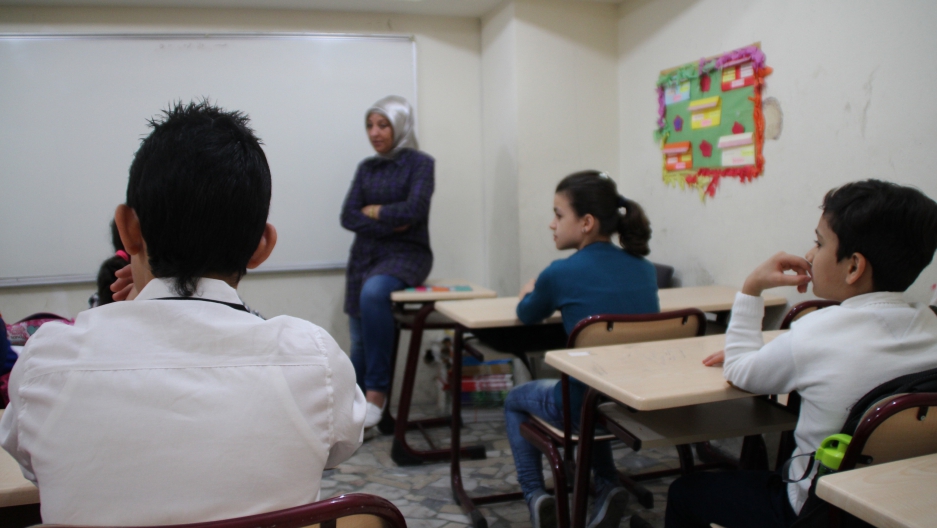 A Syrian class in Istanbul. Many of the students hadn't attending school for years.

The first day of school can be exciting and scary at the same time, but at this school for Syrians in Istanbul, there’s a strong sense of scrambling as well. Teachers run around organizing textbooks as parents try to register their children, and kids cling to their mothers not wanting to let go.

For 13-year-old Muhammad, who came to Turkey a year and a half ago, this is his first day at school in two years.

There are an estimated 934,000 Syrian children living outside of refugee camps in Turkey, displaced by the war back home. Only about a third of them are actually going to school. Like Muhammad, they’re enrolled in temporary education centers, run by the Turkish Ministry of Education and funded by UNICEF.

Muhammad’s new teacher, Wafaa, hands out textbooks to her students. Wafaa, who used to teach English and Arabic back home in Damascus, asked that I not use her last name because her husband and son are still in Syria. She says she was imprisoned for seven months by the Syrian government, accused of being a political activist. After her release, Wafaa fled to Turkey with her two daughters and enrolled the younger one in a Turkish school.

“She is in fourth grade,” Wafaa says, “and in a matter of a month and a half, she picked up the [Turkish] language.”

Wafaa says she’s glad her daughter is learning Turkish, but it’s been hard for her at a Turkish school. She says she’s been bullied and couldn’t make friends. “[Other kids] would say ‘You are Syrian.’ So they made her feel like she wasn’t one of them.”

Wafaa’s older daughter is a senior in a temporary high school with classes taught entirely in Arabic. This year the Turkish Ministry of Education is considering some proposals aimed at integrating Syrian students into Turkish schools, which is something Wafaa says she welcomes, though she adds that many Syrian parents want their kids to learn in Arabic. They’re scared their kids would lose their language, culture, and Syrian identity if they send them to Turkish schools. Even though Wafaa sent her daughter to a Turkish school, it’s something she’s concerned about too.

“For this generation if we don’t protect it, the Arabic language could become obsolete,” she says. “Syrian Arabic would be just a dialect spoken at home.”

Another Syrian teacher at the temporary education center, Ibrahim Talib, shares those concerns. He too supports learning Turkish, but not at the expense of “erasing the Syrian children’s memory of their home and culture.”

It’s not clear yet how Turkey plans to proceed. The Ministry of Education is weighing three possibilities. One would be to have Syrian schools teach a Turkish curriculum. A second option would be to send all Syrian students entering primary, secondary and high school next year to Turkish schools, so that in a few years Syrian schools would be phased out.

But it’s the third proposal that has Syrian parents worried — shutting down the temporary Syrian education centers all at once and sending all Syrian kids into Turkish classrooms.

“Everyone, the schools and the parents, everyone is against this plan,” says Adnan Hassan Khaled, vice principal of the temporary school where Wafaa teaches. He says the ministry hasn’t consulted the Syrian parents and educators. The ministry declined a request for comment.

For Wafaa, who doesn’t speak Turkish, closing down the Syrian schools would mean she’d lose her job. Her salary at the temporary school barely covers the rent as it is, she says.

“In all seriousness, my friends outside Turkey help me all the time. They send me money.”

She worries she might have to leave the country to find work.

But for now, this school is in session, with 600 students registered. And for the first time since these education centers opened in 2013, they’re tuition-free.

Muhammad says he’s just happy to be back in class. “I’m always excited when there is school and I can go,” he says.

Dominique Bonessi’s reporting was supported by the International Center for Journalists. Muhammad Abunnassr contributed to the story.