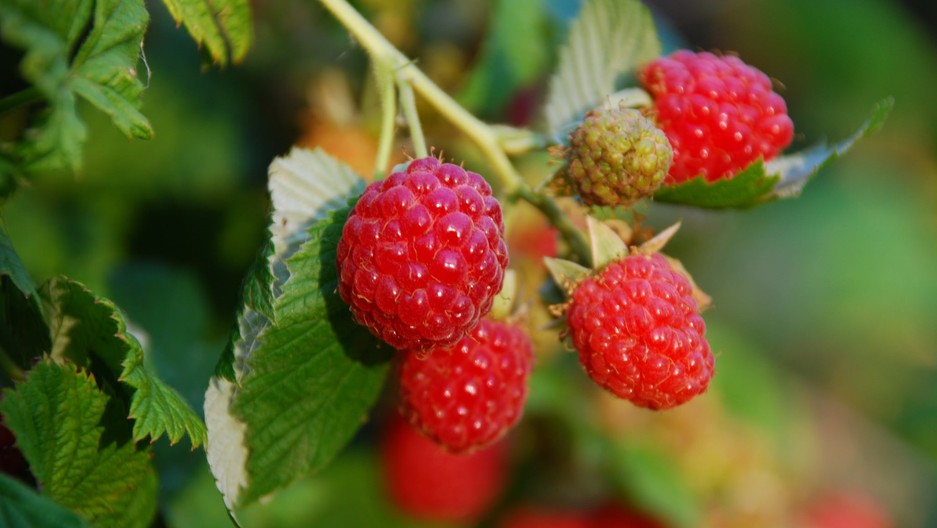 Perennial plants like raspberries are sweet additions to your garden — and can help sequester carbon from the atmosphere.

For visitors to Eric Toensmeier’s home in Holyoke, Massachusetts, the lush, 8-foot banana plant in the front yard is the first indication that something is unusual about his landscaping.

A walk around his stucco-covered house confirms it. In the back garden, about 300 species of perennials are thriving on just one-tenth of an acre: Raspberries, mountain mint, bamboo and bush clover all jostle for space alongside persimmon, chestnut and mulberry trees.

Toensmeier’s garden is an exercise in what is known as “carbon farming,” or the use of agriculture to remove excess carbon from the air and soil; storing it instead in trees and plants. As scientists and policy experts rush to develop ways to reduce atmospheric carbon dioxide levels, Toensmeier estimates that the carbon sequestration in his garden roughly offsets the emissions of one American adult each year.

“So, certainly the scale at which we’re doing this is not the scale which is necessary to fully address the problem,” he says, “but it’s sort of a research and development project, and it’s certainly doing more than mowing a lawn. It’s a step in the right direction.”

In his new book, “The Carbon Farming Solution,” Toensmeier explores in detail the potential for using perennial crops and agroforestry to trap carbon from the atmosphere. But as he explains, many of the techniques he’s using to sequester more carbon in his own garden have long been used to make plots of land naturally produce more food.

“None of these techniques were developed for the purpose of sequestering carbon,” he says. “They were all designed because they do something important on the farm. So, increasing organic matter in the soil is already a good idea on the farm. Incorporating trees in the right way, and in the right context, can increase the productivity of the farm quite a bit.”

“Studies in France have found, for example, that when you combine annual grain crops with timber trees and you have the spacing right, on 100 acres you could produce the same amount of grain and timber that would take 130 to 140 acres to produce if they were grown on their own.”

Carbon-sequestering gardens are most effective in humid, tropical climates such as in India, Latin America, the Caribbean and parts of Africa. That’s due in part to farming practices, not just climate.

“My wife’s family has one in Guatemala, and it’s the most unremarkable thing there, but I could go and get a Ph.D. walking around in there because it’s so fascinating,” Toensmeier says. “The multistrata agroforestry system with multiple layers of trees and shrubs and vines and herbs is the very best system for sequestering carbon that we have, agriculturally.”

In Toensmeier’s garden, perennial plants grow above, around and underneath other crops, even in the shade. “In these multistrata systems, these food forest systems, we try and take advantage of all the space,” he says.

What’s more, many of the species he cultivates have a few jobs in his garden — like the little patch of plants behind his greenhouse, which attract helpful insects.

“These are mountain mint, which is a native one, and there’s a large, nitrogen-fixing shrub, false indigo, which is being used as a trellis for perennial, edible beans,” Toensmeier says. He adds that the beans were first cultivated long ago by indigenous Americans, and the false indigo can be used for pesticide, fodder and indigo dye.

Altogether, Toensmeier estimates that as many as 80 of his 300 perennial species are woody plants like trees, shrubs or bamboos. About 80 of the species he cultivates have edible leaves, and around 50 have edible fruit. But he says that protein-rich, edible grasses like bush clover — which grow up to 10 feet tall in his garden — are the real carbon-sequestering food of the future. Some types of grasses can yield a leaf protein concentrate that’s as much as 50 percent protein on a dry-weight basis.

“So, by switching to these giant grasses you can produce protein and energy on the same land while sequestering carbon in the soil,” he says. “The productivity on a per-acre basis of protein with leaf protein concentrate is about 30 times more than beef.”

Toensmeier is quick to admit that carbon agriculture won’t solve all of our climate-change problems. “There’s a limit to how much carbon you can store in soil and biomass, and experts estimate that that’s somewhere around 200 billion tons globally,” he says.

But for home gardeners, carbon farming can be an easy, no-mow solution for backyards and gardens. For anyone looking to sequester more carbon at home through smart gardening, Toensmeier has some advice:

And according to Toensmeier, the easiest perennials to start with are ones we already know and love to eat. “I feel like the gateway drug to perennialization is berries,” he says.

“Everybody likes berries. Berries are delicious. They’re really good for you. Most of them are pretty easy to grow, and in this climate we have some good options for at least partial shade and a few for full shade. And that’s where I would have people start.”