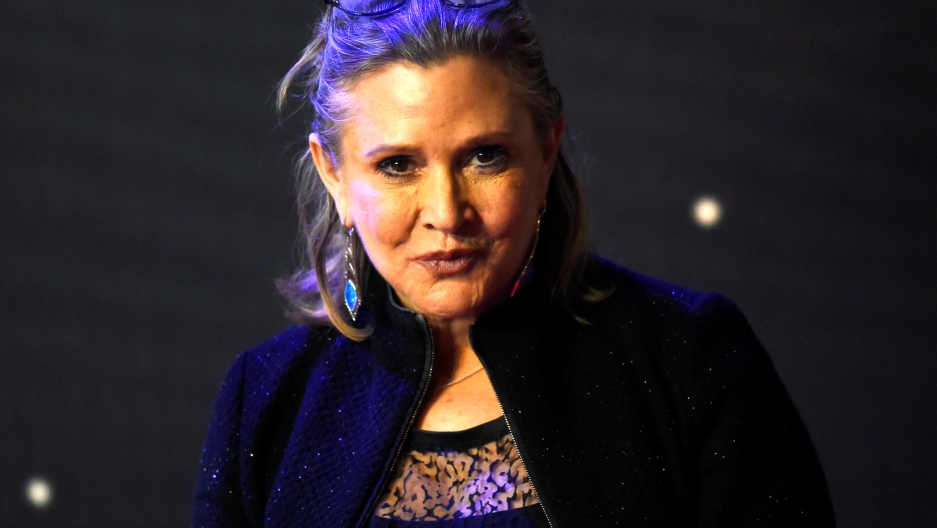 Carrie Fisher poses for cameras as she arrives at the European Premiere of "Star Wars, The Force Awakens" in Leicester Square, London, on Dec. 16, 2015.

Carrie Fisher, famous for her no-holds-barred portrayal of Princess Leia in the original "Star Wars" trilogy, refused to be cowed by any of the struggles she faced in her later life.

Fisher died Tuesday at the age of 60 after suffering a massive heart attack on a flight from London to Los Angeles. Shortly after her death, tributes poured in:

"Thank you to everyone who has embraced the gifts and talents of my beloved and amazing daughter. I am grateful for your thoughts and prayers that are now guiding her to her next stop."
— Fisher's mother, the actress Debbie Reynolds

"I am extremely sad to learn of Carrie's passing. She was wonderful to work with. Condolences to her friends, family & fans around the world."
— David Prowse (Darth Vader)

"Millions fell in love with her as the indomitable Princess Leia; she will always have a special place in the hearts of 'Star Wars' fans as well as all of us who were lucky enough to know her personally."
— Bob Iger, head of The Walt Disney Company

"We just lost a great ally for mental health and addiction. Be strong, be as (strong) as she'd want you to be. Rest in paradise."
— Comedian Margaret Cho

It was that advocacy that Cho mentions that really defined Fisher's later years. In 2009, she took to Broadway in a one-woman show called “Wishful Drinking” — an account of her struggles with alcoholism, failed romances and brushes with death that proved Fisher had a knack for stand-up. A filmed version of her stage show aired on HBO.

Fisher has long been outspoken about her problems, but seeing is believing. In December 2010, she visited PRI's Studio 360 to talk about her work. She arrived in dark glasses — yawning.

Hear more of that 2010 conversation, where Fisher talks about her struggles with addiction and mental health that touched so many:

With reporting from PRI's Studio 360 and Agence France-Presse.