Pictures of those who disappeared during Guatemala's 36-year civil war seen hanging in front of the Defense Ministry in this 1999 photograph.

Guatemala’s civil war ended 20 years ago, on Dec. 29, 1996. The conflict between rebel groups and state security forces lasted nearly four decades and took an estimated 200,000 lives — the great majority of them indigenous Mayans. It was especially hard on Mayan women, who lost loved ones, suffered sexual abuse and other atrocities, and have had to find new ways to survive and move forward in the ensuing years.

One of these women, Margarita Aju Barreno, is now 58 years old. She works selling metal pots and pans and traditional Guatemalan textiles called cortes in the market of her community, Santa Lucía Utatlán, a mostly Mayan town located in the hills above Lake Atitlán in the country’s western highlands.

Working at her stand in the market is just one of the many jobs Barreno has worked since she was left alone to raise four children more than 30 years ago. Her community was militarized by the army, and her marriage fell apart after her brother was disappeared. When she went to ask the soldiers what happened to him, her abusive husband accused her of sleeping with them. In reality, the soldiers threatened to kill her.

Today, it’s peaceful in Santa Lucía, but back then Barreno says life here was full of terror and fear for her and the rest of the community, especially the women. “We’ve suffered very much,” she says, “all the more because we had no liberty. The army was here to kill us, to do us harm. … My mother got sick and died because of this.”

According to Barreno, after her brother disappeared, her mother stopped eating and eventually suffered a stroke. Barreno herself became sick with tension and fear.

Linda Green, an anthropologist at the University of Arizona, has written about women like Barreno in "Fear as a Way of Life: Mayan Widows in Rural Guatemala." She says physical and emotional illness was common among these women, from chronic headaches and gastritis, to symptoms of what is commonly known as post-traumatic stress disorder. These ills came on top of the economic insecurity that followed after these marginalized, mostly illiterate women were left alone to raise children when their husbands, fathers, brothers, and other loved ones were killed or disappeared. 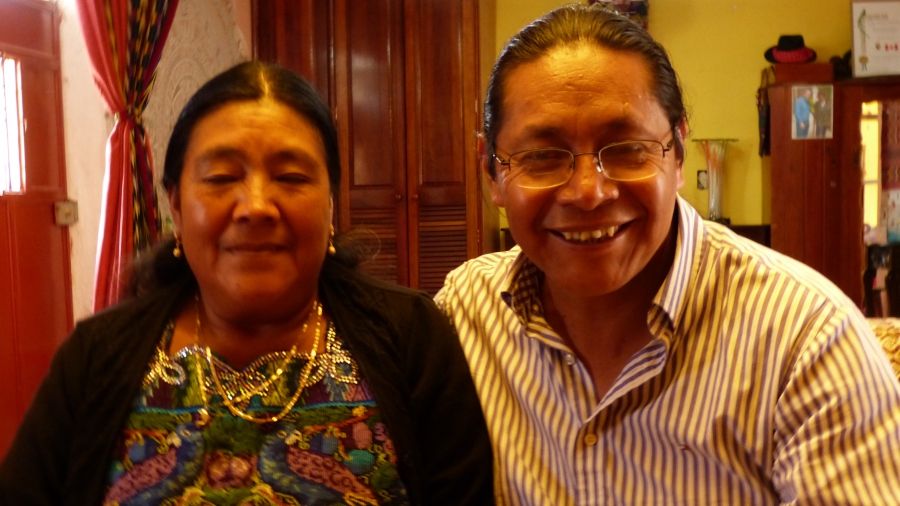 Julio Cochoy persuaded Doña Margarita Aju Barreno (l) and other victims of Guatemala's civil war to collect their stories in a book by telling them about Anne Frank.

For years, women in rural Guatemala like Barreno were terrified to speak out. But after the signing of the peace accords in 1996, the survivors in her community began to come together for support, forming the Committee of United Victims of Santa Lucía Utatlán. Eventually, they also began to talk publicly about what had happened to them and their loved ones.

First, though, they had to overcome the fear of reprisals that telling their story might bring.

“They were so scared because when the perpetrators came to kill [or] to kidnap their husbands and family members, it was clear; they say, don’t talk. Because if you do we will kill you, we will come back and kill you. … And because they were so scared, they were in silence,” says Julio Cochoy, another war victim from Santa Lucía who worked with the women of his community to tell their stories.

Cochoy himself was only 14 when five members of his family were killed or disappeared. He hid in his house for a year, terrified he might be next. His father finally raised the money to send him to study outside of Santa Lucía. Cochoy returned to his community with a university education and a strong desire to tell the world what had happened there during the '80s. But first he had to persuade the women who were reluctant to break the paradigm of silence. For one thing, they could not read nor write, and struggled to visualize the power of their written testimonies. He finally convinced them by telling them the story of another war victim, Anne Frank.

Cochoy remembers the Mayan women being touched when he told them the story of the young Jewish girl who hid from the Nazis. “And then I ask them, 'Why I know Anne Frank’s story? I didn’t meet her, how [do] I know about her?' And then one of the ladies said maybe you read it in a book,” Cochoy recalls. “And this moment was the moment when I said, yes, I know about Anne Frank because there is a book about her. And I said we can do it for your children and grandchildren.”

The book that came out of their collaboration, "Voices Breaking Through the Silence in Utatlan," was published by the United Nations Development Program in 2006.

As a result of the liberation and healing that came from telling her story, once timid and shy Margarita Aju Barreno is no longer afraid to speak out. “Some days I get sad,” she admits. “But most times, I think of how Jesus forgave, I think of my children, and I sing a song to the Lord,” she says, and then happily sings a hymn.