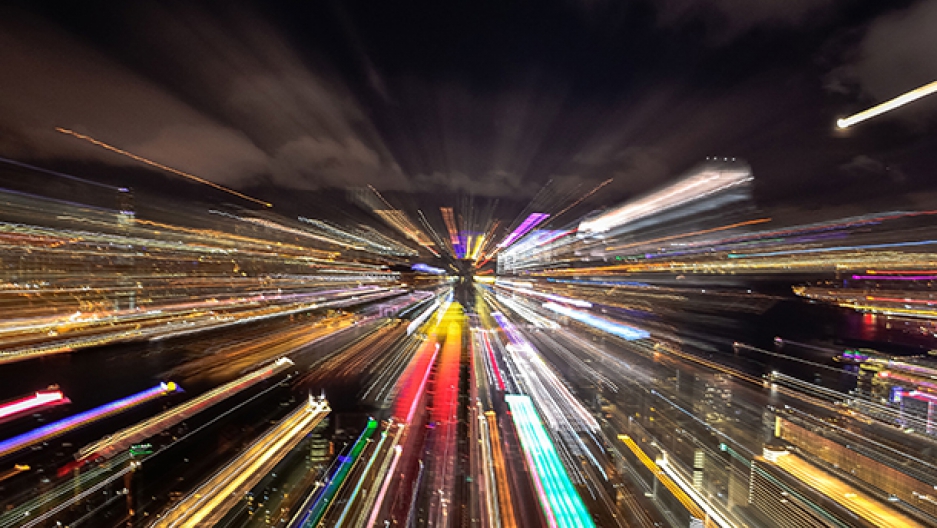 Tom Friedman describes the current era as an “Age of Accelerations,” specifically of technology, globalization and the climate.

Thomas Friedman's latest book, "Thank You For Being Late: An Optimist’s Guide to Thriving In the Age Of Accelerations," is a manifesto for how to cope with our changing planet.

Right now, three powerful forces — technology, globalization and climate change — are accelerating exponentially — and “one of the hardest things for the human mind to grasp is the power of an exponential,” says the columnist for the New York Times.

Friedman’s book was inspired, in part, from an insight in a book called, "The Second Machine Age," by Erik Brynjolfsson and Andrew McAfee from the Massachusetts Institute of Technology. The book examines the exponential acceleration in technology based on Moore's Law, which states that the speed and power of microchips will double roughly every 24 months. This has been happening now for over 50 years, Friedman says.

In their book, Brynjolfsson and McAfee cite the ancient story of the man who invented the game of chess and gave it to a king. The king said, “How can I reward you?” And the man said, “I just want to feed my family.” The king said, “It shall be done. What would you like?” And the man said, “Your highness, I'd just like you to take one grain of rice and put it on the first square of this chessboard, then put two on the second, four on the next, eight on the next, then 16 on the next, 32, and just keep doubling it, and my family will be fine.” The king said, “Of course. It shall be done” — not realizing that when you double something 63 times, the number you get is more than 18 quintillion, more rice than existed in the world.

“What Andy and Eric argue is that, in terms of Moore's Law, we just entered the second half of the chessboard, where the doubling starts to get very big, and the result is you get some very funky stuff,” Friedman says.

So, Friedman asked himself what the world most needs to survive in the face of such rapid change. It needs two things: “You want resilience. You need to be able to take a blow, because you don't know when the disruption is going to come, but there will be disruptions. At the same time, you want propulsion. You want to be able to move ahead. You don't want to be just curled up in a ball.”

Friedman came to understand that, in nature as well as in human society, polyculture (or diversity) is the key to resilience. During the 1930s Dust Bowl, for example, only fields that were natural polycultures, like native prairies, survived. Monoculture crop fields — corn, wheat and soybeans, for example — were wiped out.

Friedman says that Arab world was at its height when it was the greatest polyculture on Earth, in Moorish Spain. “It was a polyculture of ideas, of people, of Christians, Muslims and Jews. The Arab world was never more prosperous than then. What’s happened today in the Arab world is that al-Qaeda and these Islamist groups are trying to wipe out that polyculture and replace it with a monoculture that is enormously susceptible to diseased ideas,” he says.

Friedman says he “consulted” Mother Nature directly to understand how to build resilience and move forward in the midst of great changes. This is what she told him:

“First of all, I'm incredibly adaptive through natural selection, in a very brutal way.

"Second, I love pluralism. I love diversity. My most diverse ecosystems are my most resilient, and I love trying 20 different species and see who survives.

"Fourth, I'm incredibly entrepreneurial. Wherever I see an opening in nature, a blank space, I fill it with a plant or animal or both, perfectly adapted to that niche.

"Fifth, I'm very patient. I understand you can't speed up the gestation of an elephant or the growth of a thousand-year-old Baobab tree. Strength comes from patience.

"Lastly, I believe in the laws of bankruptcy. I kill all my failures, return them to the great manufacturer in the sky, and take their energy to nourish my successes.”

“So, the argument I make in the book is that the countries, communities and companies that most closely [and] consciously mirror Mother Nature … are the ones that are going to thrive in what I call the Age of Accelerations,” Friedman concludes. “I’m a big believer in biomimicry.”