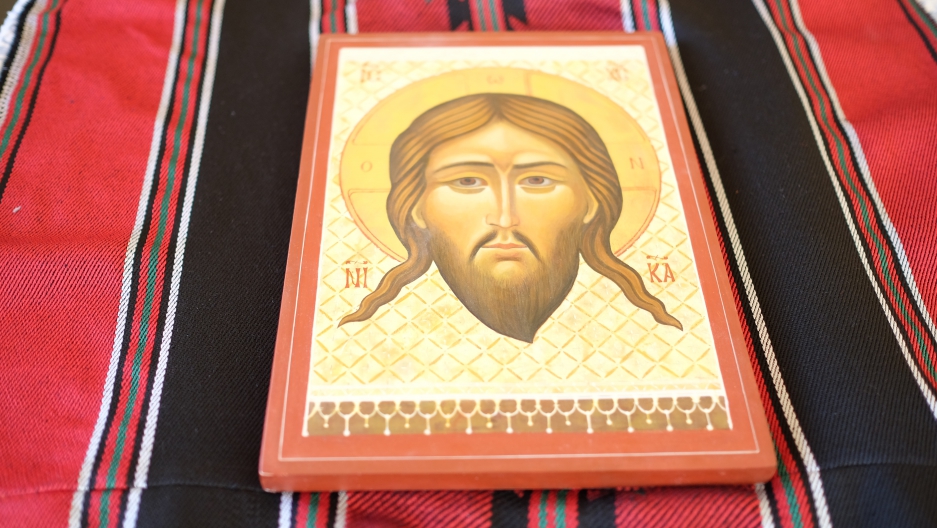 Christian icons are available in plenty of tourist shops in the Palestinian city of Bethlehem, in the West Bank. But the ones painted by Palestinians are harder to find.

Ian Knowles was first captivated by Christian icons as a teenager, during a trip to Greece. These days, the 54-year-old British expert on religious art is busy working with Palestinian art students in the West Bank city of Bethlehem, helping them learn an ancient style of iconography.

On this day, students Vinny, Khuloud, Joanne and Samar are standing in front of their canvases with pencils in hand.

The face of Jesus, in art-school lingo, is called the Mandylion. It’s one of the most important images here at the Bethlehem Icon Center, which houses a school, chapel and visitor center. 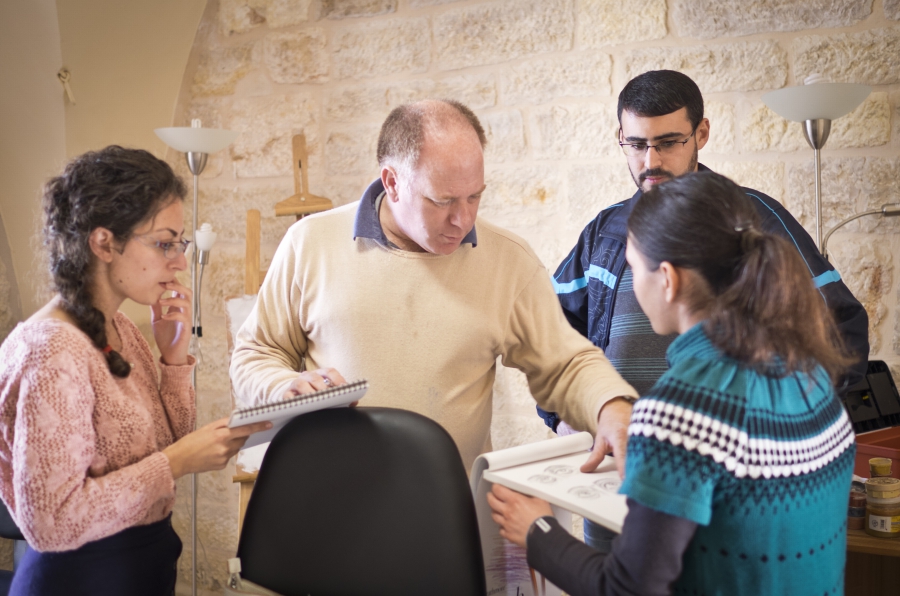 Here is Ian Knowles (center) working with some of his Palestinian students at the Bethlehem Icon Center.

Knowles founded the center back in 2012. It’s the first of its kind in the Middle East, and he says Bethlehem is its natural home.

“This is the place where you get the first physical image of God ever in history,” says Knowles. “So, when we do icons, we’re doing them because God has given us the icon of himself, and we can just copy and perpetuate what he’s begun.”

“It should be here in Bethlehem. Bethlehem is the place of the icon.”

Knowles visited this city for the first time in 1999 as a pilgrim. Almost a decade later, he returned to help restore a church in the nearby Christian Palestinian town of Beit Jala.

That project led him to start teaching iconography in a space he rented from Bethlehem University. Then he got to thinking about building something more permanent. 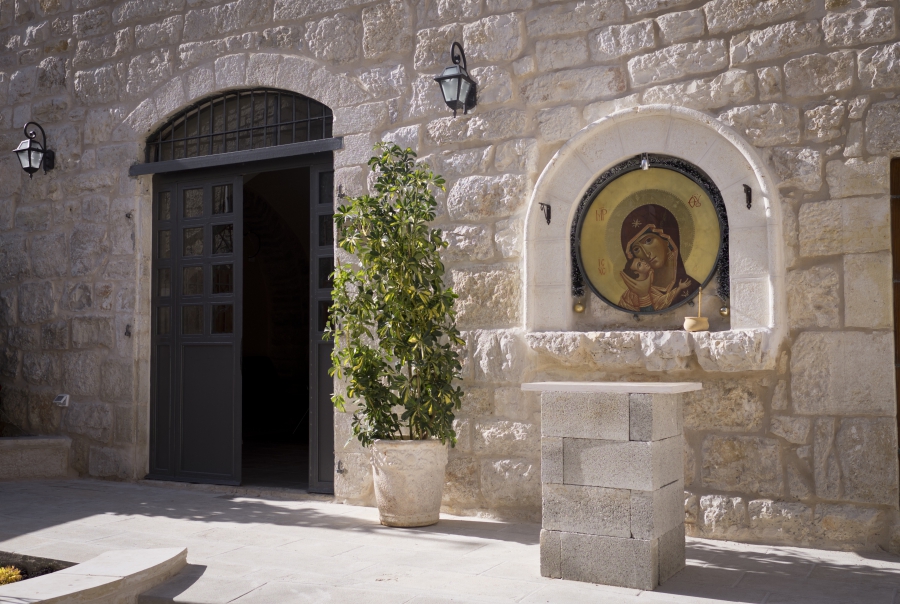 The economy in Bethlehem, which is only a short drive from Jerusalem, depends heavily on the tourism business.

The icon center is located in a small refurbished stone building on Star Street, believed by some to be part of the route taken by Mary and Joseph just before the birth of Jesus.

The street used to be a magnet for pilgrims. But ever since the Palestinian uprising in the year 2000, it has been devoid of tourists for most of the year. Knowles hopes the center will help change that, and he wants visitors to be able to meet the local Palestinians who produce these icons.

“It’s a place where they can learn, they can ask questions, they can interact with the people doing it,” Knowles says. “And it becomes a living relationship between the pilgrims and the people who live here.” 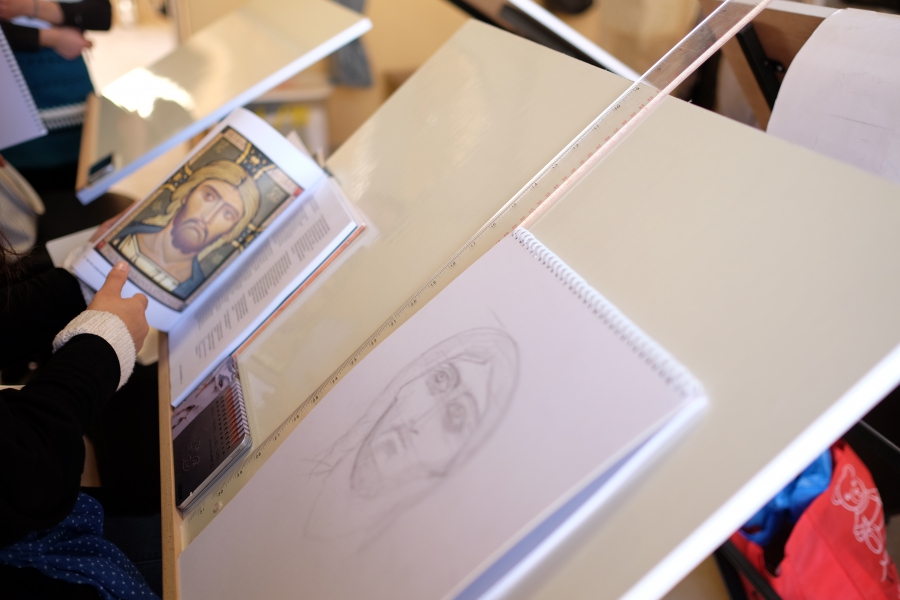 In Orthodox Churches, the image of the face of Jesus is known as a Mandylion.

Many of the icons in Bethlehem’s tourist shops are cheap knockoffs, imported from places like China or Greece. But Knowles wants to help Palestinians do something different, by making a living producing their own religious artwork. The idea is not to sell the work in souvenir shops, but to work on commission and sell pieces online, or at the icon center.

“The artists, they can’t even feed their children. How is this right?” Knowles asks. “This is sacred art. This is Bethlehem, there’s a spiritual imperative which says you don’t act in this way.”

Bethlehem is not a desperately poor place, but the unemployment rate here is about 20 percent, which is the highest in the West Bank.

Some of Knowles’ art students have already shown signs of being business savvy. They commissioned one piece of work for a chapel in Birmingham, England, and this past summer, three students collaborated on another one that sold to a medieval cathedral, also in the UK.

“If you’re paid $50 a week for the work, you haven’t got any money to buy the best materials, so icons end up being done on the cheap,” Knowles explains. “Even people who are very talented don’t have time to invest in their talent, to train. And so you end up with mediocre stuff, which is sold simply to make a bit of money.”

“It feeds into this whole corrosive attitude that Bethlehem is just about making money from tourists.” 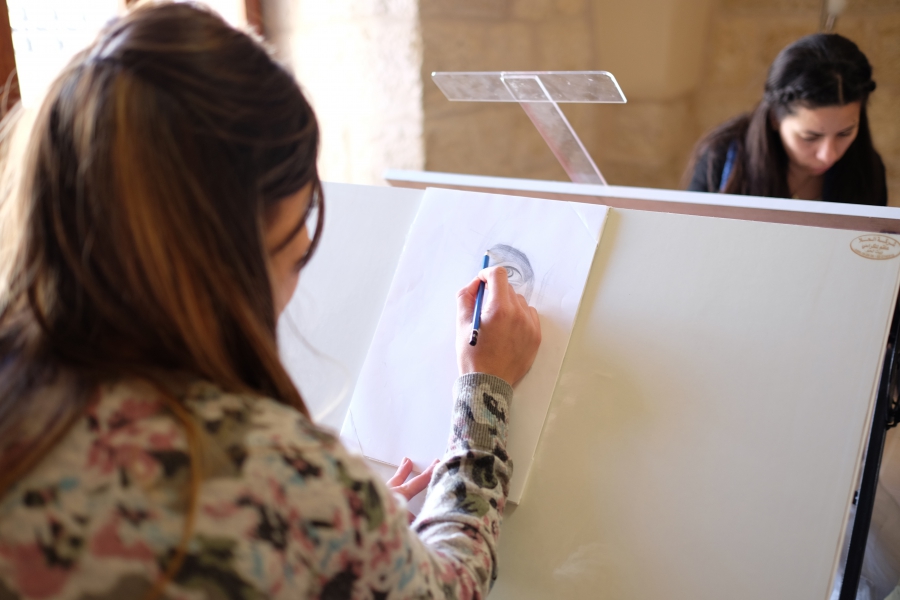 Palestinian students are shown here at work in the Bethlehem Icon Center.

At the school, students can take one-week courses or even do a three-year program in Christian iconography. They don't pay tuition, but they do have to bring their own tools. Vinny Talamas, a young English teacher, is a student here at the center, and he is excited to study with Knowles.

“Ian has taught us that it's primarily how we see reality, and so we've been retraining our eyes and part of that is our interior life, too, being more attentive to how we view nature, how we view the human person,” Talamas says. “He supplements that with a lot of theology and even some anatomy in a way of bringing out the fullness of what iconography is.” 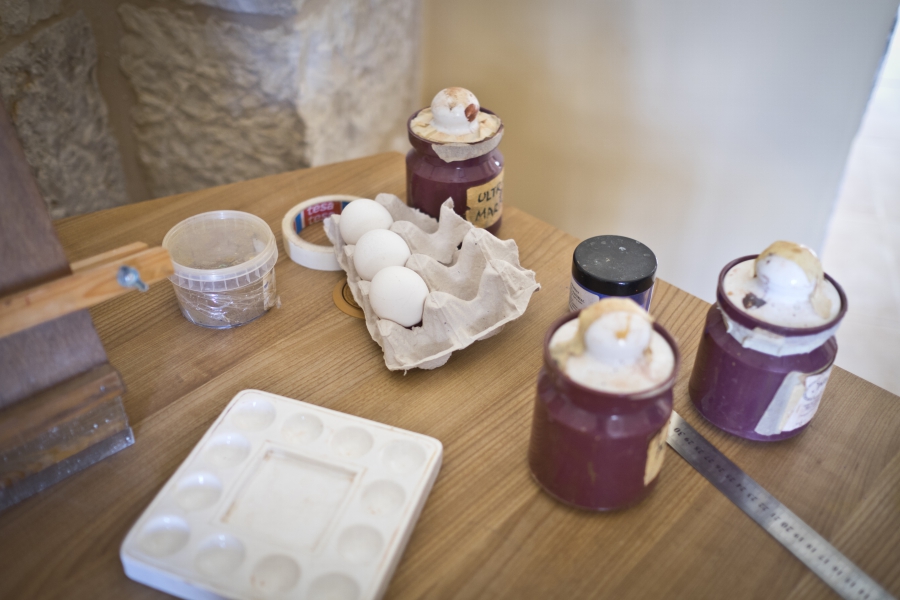 Students learn how to make egg tempera, a kind of paint, using egg yolk, vodka, water and some natural pigments.

Throughout the course, students learn how to make their own natural dyes for use in paints. They grind stones from around Bethlehem to produce certain colors, and they use egg yolks and vodka to make others.

Knowles says his long-term plan is to hand over control of the icon center to a Palestinian director.

“We're trying to do something which respects local people, respects — isn't a colonialist project,” he says. “It’s just me sharing a few skills I have. Seeing possibilities which are perhaps being overlooked otherwise.” 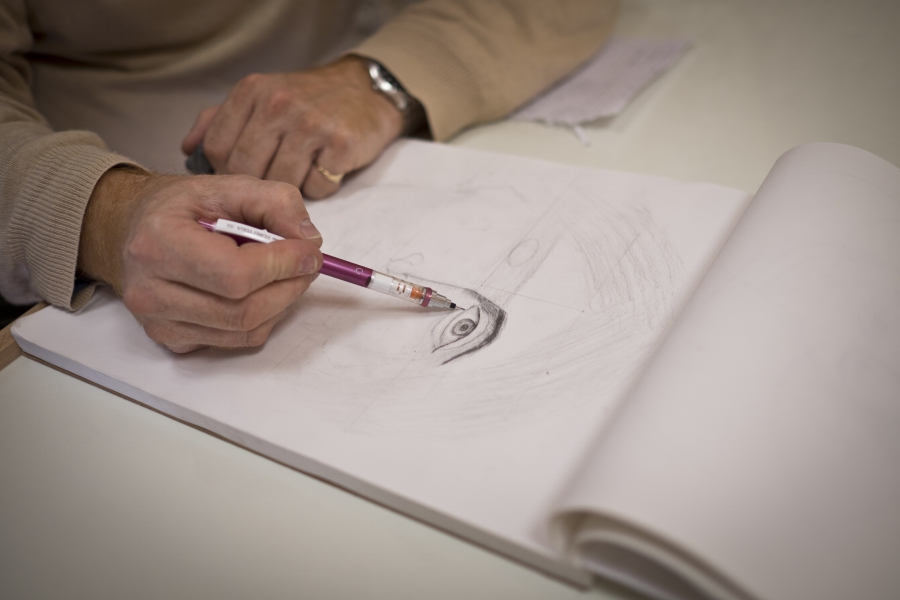