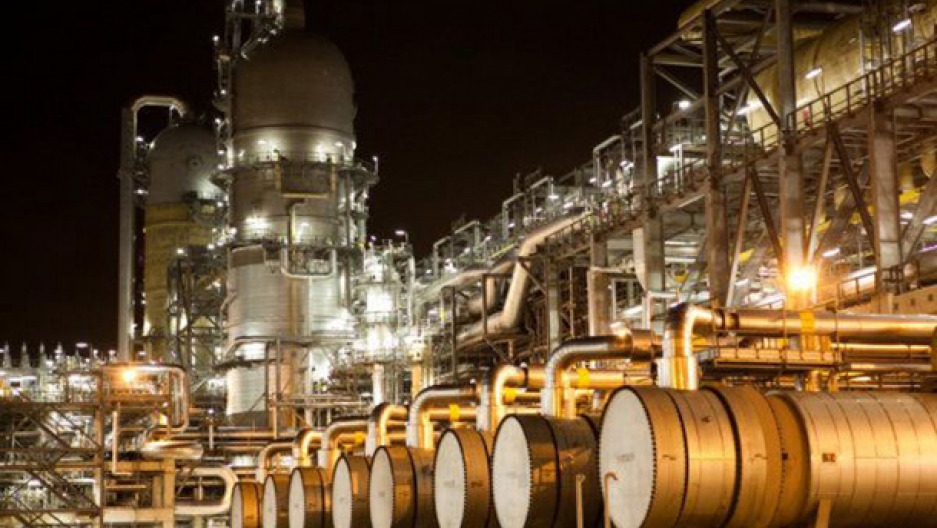 This is a nighttime view of a Shell-owned ethane cracker facility in Singapore.

A planned industrial facility near Pittsburgh, Pennsylvania, is expected to create thousands of construction jobs and up to 600 permanent ones. It is also forecast to increase air pollution in a region already falling short of federal clean air standards.

The Appalachian division of Shell Oil is building the $6 billion petrochemical complex 30 miles northwest of Pittsburgh. The plant will include what’s called an "ethane cracker," which will convert ethane, a byproduct of hydraulic fracturing, into polyethylene, a chemical used to make everything from plastic bags to bottles to toys.

There is a lot of ethane gas in the deep shale formations in western Pennsylvania, but ethane is not very useful on its own. It becomes much more useful after being sent through the cracker.

Ethane is a simple chain of two carbon atoms surrounded by six hydrogen atoms. Before reaching the cracker, ethane gets separated out from methane, the main component of natural gas. In the cracker, the ethane is heated to a point that causes its molecular bonds to fly apart and rearrange themselves into something new, called ethylene. In the ethylene molecule, the two carbon atoms form a double bond with one another. This double bond is the key to ethylene's value.

Ethylene molecules can be strung together in long chains. These long chains of ethylene create polyethylene, the ubiquitous material found in nearly every modern plastic, from milk containers to medical devices to auto parts. Unfortunately, creating polyethylene comes with a price: pollution.

“Adding the cracker at this point in time … brings the levels of VOCs released in Beaver County by industrial sources to levels greater than what was seen in 1999,” he says. In fact, with a projected 500-plus tons emitted per year, the plant would be the largest source of VOC pollution in western Pennsylvania, according to Environmental Protection Agency records, and the third-largest in the state, behind an oil refinery in Philadelphia and a Styrofoam plant in Reading.

Fabisiak says these emissions are a particluar concern because Pittsburgh’s air already fails to meet federal standards for several pollutants, including ozone. But Shell and Pennsylvania state officials say the cracker isn’t a threat to public health. Mark Gorog, head of the air quality program for the Pittsburgh regional office of the state Department of Environmental Protection, says Shell is installing modern pollution controls and a leak detection system in the plant. In addition, the company had to show the DEP that its plant wouldn’t make the air unhealthy in surrounding areas.

“Basically, they modeled to show they will not cause or contribute to an exceedance of national ambient air quality standards,” Gorog says, “and they did a risk assessment for air toxics, which showed there was not going to be an undue risk to the public.”

The company will also buy more than 1,000 tons of pollution offsets to make up for emissions that will come from its smokestacks, storage tanks and flares. These offsets are called Emissions Reductions Credits, or ERCs. ERCs work kind of like a cap-and-trade system. The theory is that Shell will have to pay another company to clean up emissions by buying credits from a plant that is either closing or installing pollution controls.

But there is a catch: Under state law, Shell is allowed to buy credits from plants that are already closed. Fabisiak says this means pollution that has already been eliminated from one source will now be coming back in the form of emissions from the cracker plant. “I don't see that as improving the air quality to any great extent,” he says. “It's like three steps forward, 2.99 steps back.”

The DEP, which approved Shell’s plan, doesn’t see a problem with the pollution credit system. By state law, plants that close have 10 years to sell their emissions credits. Gorog says new plants have to buy about 15 percent more credits than they will actually emit. So, if Shell wants to emit 100 tons of pollution, it will have to buy credits for 115 tons, which means emissions will gradually go down.

“There's a certain pool of pollutants for the area, and gradually, over time, it shrinks,” Gorog says. “Over time, what the design does is shrink the pool of emissions to bring the area into attainment.”

With or without Shell’s ethane cracker, DEP officials admit it won’t be easy for Pittsburgh to meet federal air standards in the near future, as last year, the EPA enacted even stricter rules for ozone.