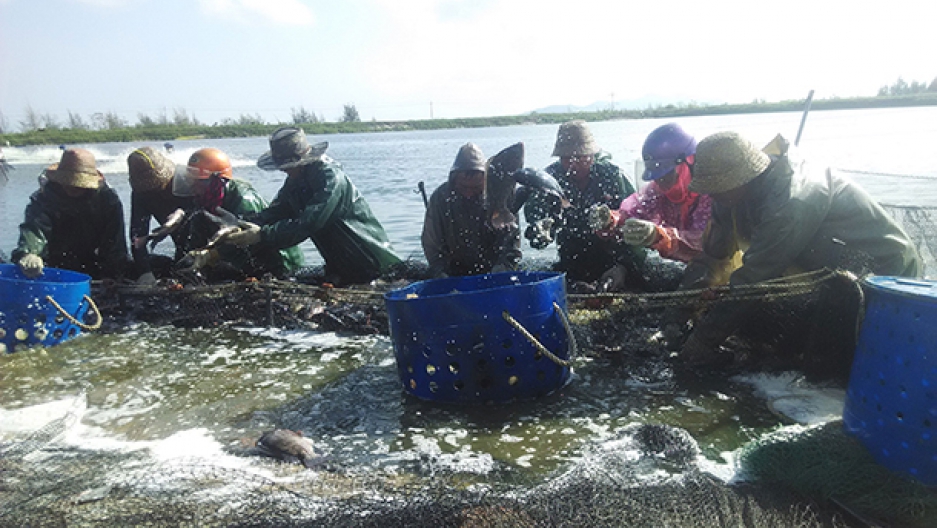 Here, tilapia are being harvested for export on an internationally certified farm near China's Hainan Province.

With unsustainable fishing affecting about 30 percent of the ocean’s wild fish populations and most of the rest already fished to the limit, aquaculture is playing an ever bigger role in putting fish on the dinner table.

Today, fish farms are the fastest-growing source of animal protein — on the rise, globally, at about 5 percent a year.

Fishing boats are seen on Hainan, here. China relies on aquaculture for most of its seafood.

Farmed fish have some environmental benefits compared with other sources of animal protein. In addition to reducing pressures on wild fish populations, they are climate-change friendly. A pound of fish has about one-seventh of the carbon footprint of a pound of beef.

This sea cucumber is a Chinese delicacy.

But large-scale aquaculture has created new problems, including overfishing of species caught for feed on the marine farms.

Today, about a quarter of global wild fish catch is of herring or anchovies, which are used for fish meal or fish oil.

Cao Ling, a researcher at Stanford University, says China is the largest importer of fish meal, accounting for about one-third of the total trade. And poor regulation, along with climate change and overfishing, are contributing to unsustainable exploitation.

“In Peru, anchovies used to be really abundant. Now, the population has dropped a lot.”

Professor Qi Genliu of Shanghai Ocean University says that in China, convenience and the growth of large-scale aquaculture have increased the appetite for fish meal.

He says for centuries, China raised freshwater carp by feeding them grass. But that changed several decades ago when the fish feed industry started up.

"Now we use feeds. It is not only more efficient, but it also saves labor," says Qi.

"That can lower your unit cost, but you didn't take into account the massive pollution," she says.

Overuse of antibiotics and lack of wastewater treatment are among her concerns.

China Blue is headquartered in an apartment-turned-office on China's southern tropical island of Hainan, a popular tourist destination known as China’s Hawaii. It’s about a 90-minute drive away from the rural district of Wenchang, home to hundreds of fish farms. 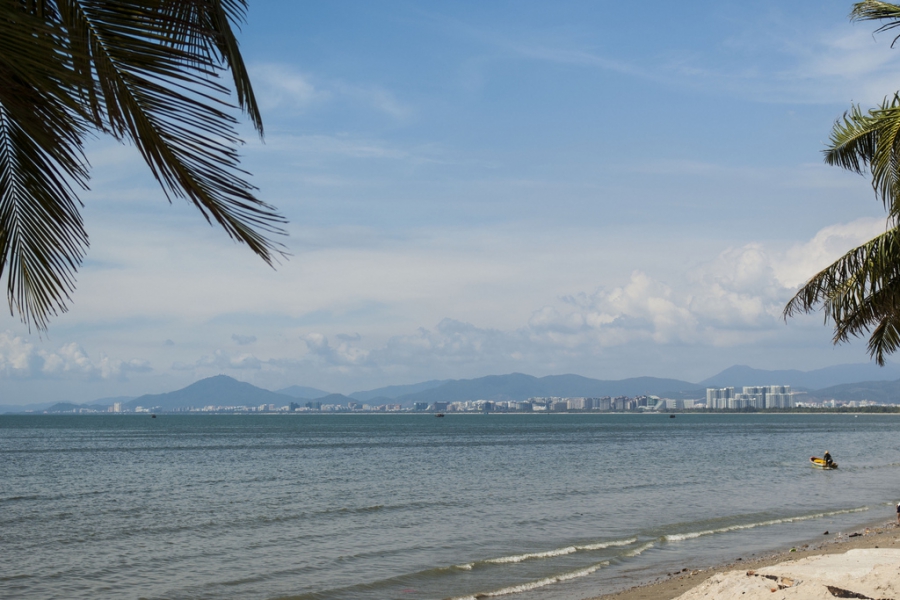 The beaches and mild climate of the island of Hainan make it a popular destination for vacationers from China and abroad.

Many are small, family-owned businesses that operate under the radar.

These farms release untreated water back into the sea that is contaminated with fish waste, as well as with leftover fish feed and medicines such as antibiotics. 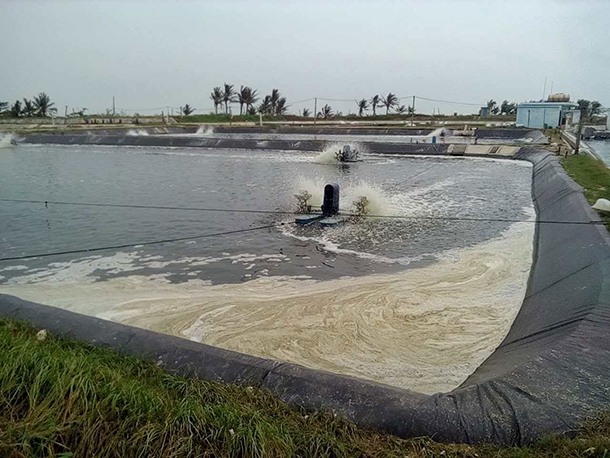 Wastewater is released untreated into the ocean at this hatchery in Hainan.

The concoction is a concern for professor Cai Yan, an aquaculture researcher at Hainan University.

"Antibiotics kill a lot of bacteria. So they reduce the diversity of microbes in the environment.”

This can lead to the formation of so-called superbacteria that don’t respond to antibiotics.

“You can't do anything with them,” says Cai. “You can't kill them. So if these superbacteria go into the human system and one day you get sick, you don't have any medicines to kill it. That is the big worry."

While professor Cai says there are no known cases in Hainan of humans getting sick from superbacteria, local fish farmers are finding medicines they once used to cure ailing fish are no longer effective.

Some farmers have seen big die-offs.

The government has taken action. It's banned the carcinogenic antibiotics, and it's started arresting and sentencing farmers who violate regulations. In Wenchang, the local government has created a fund for a water treatment plant. 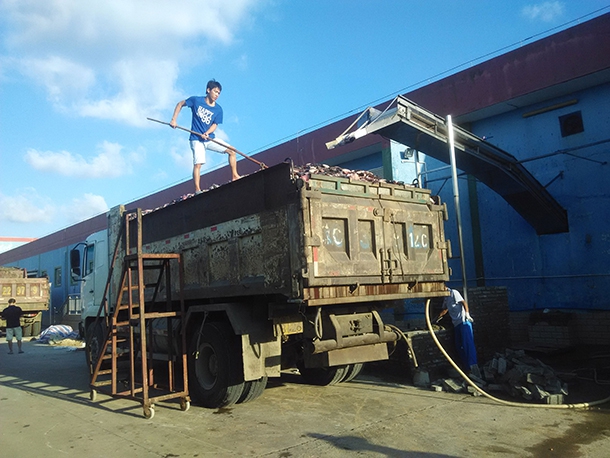 The idea is that all the farmers could send their dirty water through the plant before it returns to the ocean. But with so many small operations, the project would be both costly and complicated. And it’s unclear if it’ll get off the ground.

Recently, private businesses have also started to take action, thanks in part to the concerns of American consumers.

Wenchang is a major source of tilapia exported to the US. Following highly publicized reports of antibiotics exceeding Food and Drug Administration standards, in recent years, US demand has fallen.

That helped get the industry to promote environmentally sound practices.

Han Xuefeng, no relation to Han Han, heads the two-year-old Hainan Tilapia Sustainability Alliance. He says for the tilapia industry, boosting farm standards is a matter of life or death.

A number of small farmers and processing plants have gone out of business. Others are teetering.

But Han, a former manager of a fish processing plant, is taking a glass-half-full perspective. He accepted a pay cut when he took over as head of the Sustainability Alliance, and he's determined to fight for the survival of the industry.

"What we need to do now is to find out how to promote sustainable production in order to make use of the opportunity," says Han.

Han's association has found a partner in the island's most important export market. Two years ago, The Fishin’ Company, America's largest tilapia importer, stepped up to the plate. Manish Kumar, the company's founder and president, started coming to Hainan to build a coalition for a safer, more environmentally sound tilapia industry.

Together with the local industry association, his company is sponsoring training and offering financial incentives to a few model farms that invest in improvements.

The idea is, others will follow suit if they see it makes financial sense.

Many of the small fish farmers have no prior professional training. So, The Fishin’ Company starts with simple things, like helping farmers keep records.

The farmers track weather conditions and water temperature, which affect fish health. And the farmers keep records of the feed and the medicine they use. 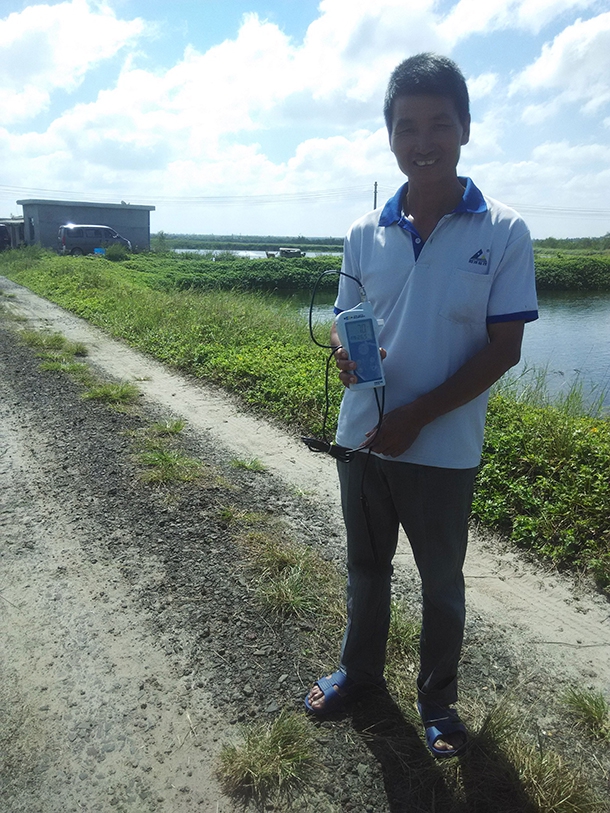 A fish farmer participating in the Fishin’ Company’s training program is shown here.

The plan is to help more farmers get international sustainable farming certification by third parties.

As America's largest tilapia importer and the supplier for Wal-Mart, Kumar says he has a lot at stake.

"I'm gambling for the future prosperity of this industry, which has given me so much, which is my career, and I'm gambling against losing my reputation. And I'm gambling very hard for positive change.”

His ideas include increasing tilapia’s omega-3 levels, the fish oil that may help lower risk of heart disease, cancer and arthritis. To help reassure customers who are nervous about what their fish are eating, next year Kumar is planning a state-of-the-art oversight system that involves cameras, QR codes and consumer monitoring. 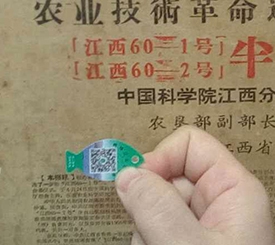 "We will now proceed to do something no one in the industry has done before. Put a camera system into the farm area.”

In this scenario, customers buy a bag of fish and scan the QR code on the bag. Up pops a picture of the farm that raised the fish, as well as information on what the fish is being fed.

Kumar says the extra cost will be negligible. As the largest supplier of tilapia, he expects to be able to take advantage of economies of scale.

"I challenge the rest of the industry to do it. And then the people who don't do it will be the ones on the hot seat."

Meantime, at local universities on Hainan, experts are looking to traditional Chinese practices to solve the problem of excessive use of antibiotics. 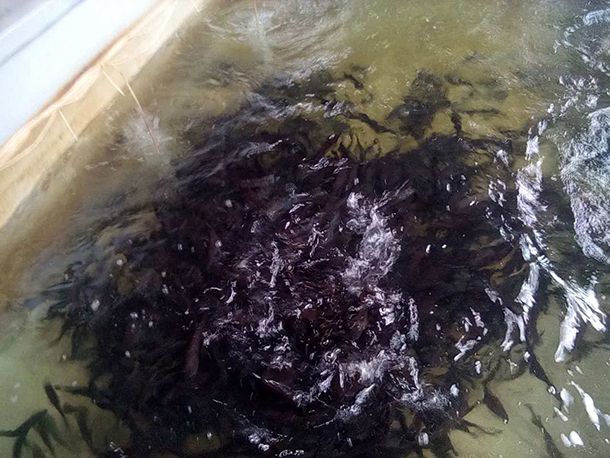 These are fish in Zhang Meiyu’s aquaculture ponds.
Credit:

"After we noticed the bad effects of antibiotics, we realized we can do something, for example, use Chinese herbs," he said.

Guo says the idea is to boost the immune system before the fish get sick. This reduces the need for antibiotics.

Guo says he's had good results so far, however, it will take time to identify and isolate the active ingredients, and reduce the cost of herbal treatments.

He says there are not enough researchers with expertise in fish and Chinese medicine, as well as the ability to apply western scientific techniques to analyze herbal remedies.

At the Agriculture Ministry in Beijing, Fisheries Bureau Deputy Director General Li Shumin says the government favors such research, but he warns not to expect significant government funding anytime soon.

He says so far, such efforts have not been a high priority at the budget negotiating table.

This article is based on a report by Jocelyn Ford that aired on PRI’s Living on Earth with Steve Curwood.