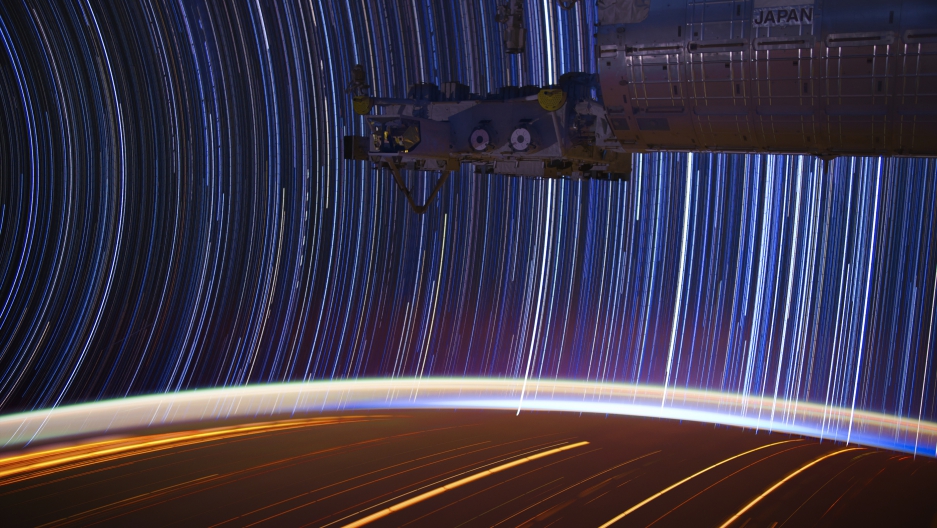 Star trails, as seen from the International Space Station

Astronauts have countless official tasks to accomplish once they’re up and out of Earth’s atmosphere. But space walkers need hobbies, too.

“If you’re gone for six months, you can’t spend all your time nose-to-the-grindstone working,” says Don Pettit, a NASA astronaut who has lived on the International Space Station (ISS) for 370 days over the course of three missions. “You need to have some means of relaxing, and I like to refer to it as ‘orbital scrimshaw’” — in other words, a space-based hobby.

This “orbital scrimshaw” varies among crews, and has included pastimes like basket weaving and quilting, even gourmet cooking.

Pettit himself partook in a longtime passion: photography. Since his first mission aboard the ISS as part of Expedition 6 in 2002, he’s taken hundreds of thousands of images, focusing his skilled eye through small windows on views of Earth and beyond. A collection of his photographic work — which includes gorgeous starscapes and intricate scenes of Earthly landmarks, captured in stunning detail in infrared, black and white, and color — has now been published in a new book called Spaceborne. 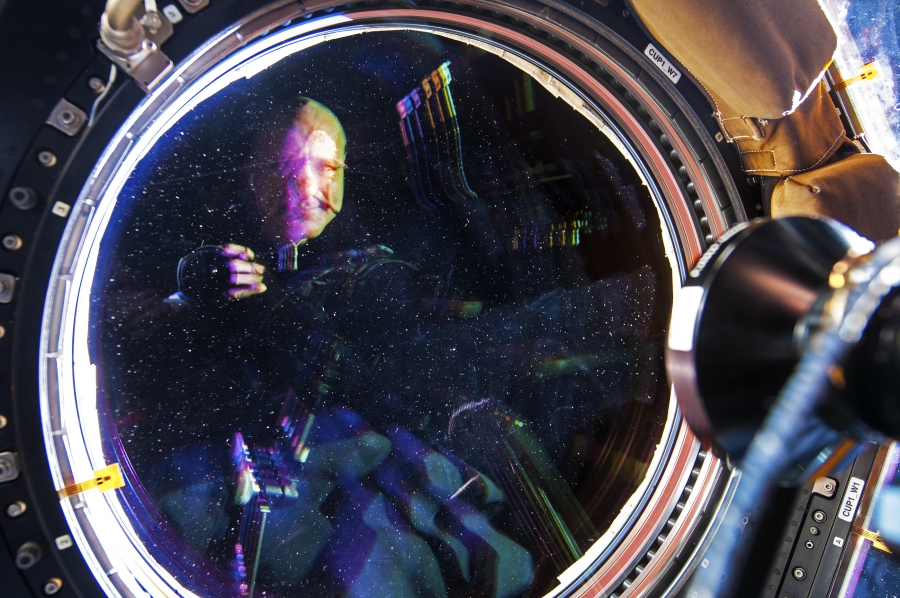 Don Pettit is an astronaut on the International Space Station.

“The making of art is, I believe, an inevitable consequence of being human, and I hope my photographs illustrate that this happens even in space,” Pettit says.

We recently spoke with Pettit about his photography and the challenges of capturing that perfect shot as Earth rotates below.

To what extent does NASA require its astronauts to take pictures while on missions?
NASA has a whole series of engineering photographic requirements that they give us enough training to do. Say you have an electrical connector and it has some pins in it that are bent. You need to be able to do a macro photograph of the end of the electrical connection so the engineers can see which pins are bent and how to fix them. Sometimes we take general review pictures of what the inside of the Space Station is looking like, or pictures outside of the solar panels and the radiators just as an engineering inspection.

There’s no requirement to take a picture of Earth. You could do a whole mission without taking a pretty picture out of the window, and from a mission point of view, that would be just fine.

Did you recruit your fellow astronauts to join in photographing for fun?
Photography grows into a favorite hobby for astronauts. You may have astronauts that on Earth may not really think that photography is their hobby, but when they get in space, they become a photographer.

What I was able to do with my crewmates was sort of divide and conquer. For example, André Kuipers is from the Netherlands—he was on Expedition 30/31—and he was really interested in getting good pictures of Europe. And so Europe became his specialty, and we each had our own little area. That way, as a crew, we could get more subjects covered versus everybody doing every picture for themselves.

Before Expedition 30/31, the total number of pictures taken on the Space Station was half a million. During our expedition, we took over another half a million pictures, and that was just because we were a click-happy crew.

We would have three or four cameras set up at any one time. We kept probably close to 10 cameras in the Cupola area, each one set up for a different kind of photography. 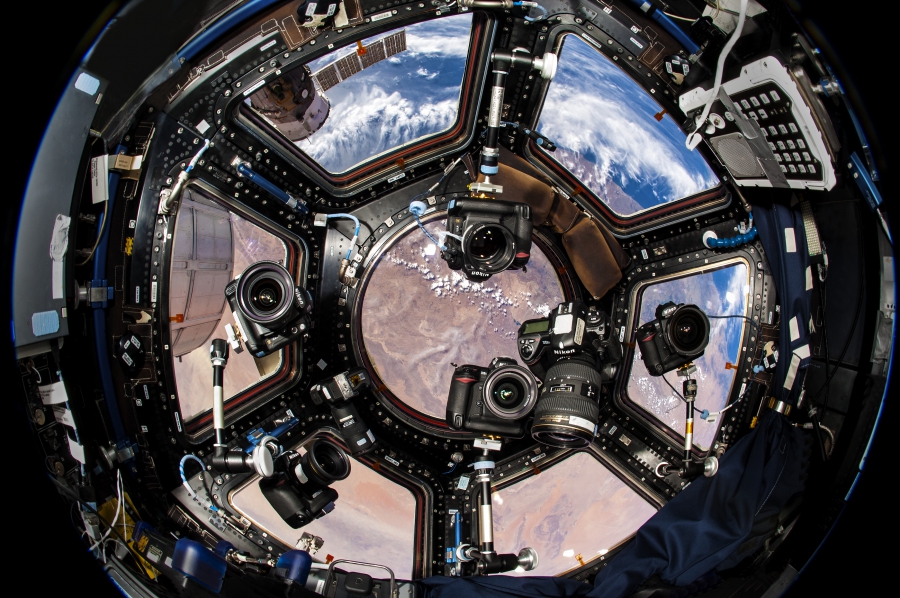 Cameras in the ISS.

Did you have any specific goals for the types of photos you wanted to take while in space?
One of the things I wanted to avoid is a common behavior: People immediately gravitate towards the longest telephoto lens that we have on the station, which is 1,200 millimeters. And they want to get a picture of their hometown, or other places on Earth, like the Eiffel Tower, the pyramids, places like that—landmarks. And if you’re lucky, you could get a picture that’s almost as good as what you could download from Google Earth.

There’s nothing the matter with this, but my philosophy is, I want to take pictures that are radically different than anything else you could see from a satellite platform like Google Earth uses.

The kind of pictures you don’t see, and what satellites can’t take, are the wide-angle obliques. So you put on a 14-millimeter wide-angle lens, and you take a picture that shows Earth and the limits of Earth, the curvature and star field, and detail on Earth for over the length-scale of half a continent. For example, all of Europe can be captured in one photo. That’s something that no platform can do right now except an astronaut with his camera.

Did any photographers inspire your work?
Of course. One photographer I got to listen to give a presentation when I was at the University of Arizona [where Pettit got his doctorate] was Ansel Adams. It was really interesting listening to his philosophies of composition and how he handled the technical aspects of black-and-white photography. It was fascinating listening to Ansel talk.

Your own black-and-white photography is quite striking.
There’s a lot of different tones in black and white—it’s not just strictly black and white. You could have a gold tone, a sepia tone, you could have a chrome tone, a selenium tone; each one brings out different details. And if you take up a highly colored picture of Earth and you render it in one of these black-and-white mediums, your eyes focus on different details, and it brings out a completely different response even though it’s the same picture that you had seen in color. 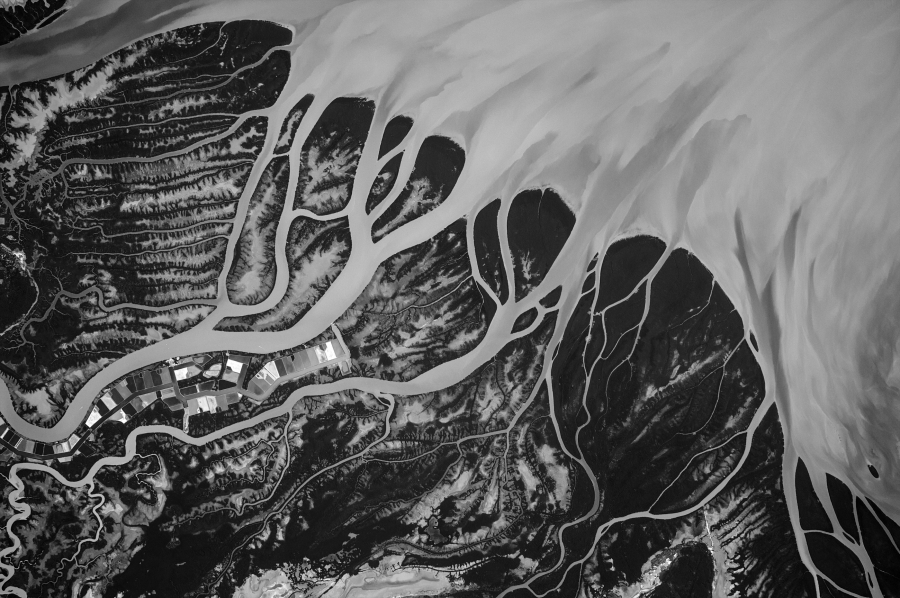 What were some of the biggest challenges of taking photographs from the ISS?
One thing, if you’re looking at views of the Space Station and of Earth, you can only look out of places where engineers put the windows. And it’s not possible to improve the composition by sliding a few to the left or a few feet to the right; you are stuck with the view wherever the window happens to be, and with whatever junk is out there, like engineering stuff that happens to be within your field of view. You can’t clean it up, you can’t make it look nicer, you’re just stuck. So that’s one thing.

Reflections are another. Most of the windows on the station are four separate panes of glass. Each pane has two surfaces, so you have eight surfaces. We put anti-reflection coatings on these surfaces, but even with an anti-reflective coating, you get a small percentage of light reflected with each surface, so you can get eight reflections from just a small light. If you have a control light on a panel behind you—say it’s green and there’s a red one next to it—you will see eight little green dots and eight little red dots reposed on your picture. So you really have to work hard to keep the stray reflections from spoiling your picture.

When you’re taking images of Earth, you also have to account for the planet’s movement, right? How do you deal with that?
Earth moves by at about five miles a second. And even at the fastest shutter speeds that you have on the camera, which is like an 8,000th of a second, that rotation will put a noticeable blur on your image. For daytime photography, you have to do manual tracking—you have to be able to slew the camera at the same rate that the Earth is moving underneath you, and while you are slewing the camera, you very carefully squeeze the shutter to take a picture. That takes a lot of practice, but if you can do that, you will end up with incredibly sharp telephoto images of Earth. If you don’t do a good job of tracking, you’ll end up with soft-focused images of Earth.

For the nighttime, you need to put the camera on a bracket because the shutter speeds are long, and you just can’t physically hold the camera steady enough to intrinsically record what the resolution of your lens and camera are capable of doing. There is some blurring due to orbital motion during the exposure, but using wide-angle lenses reduces the effects of motion blur. 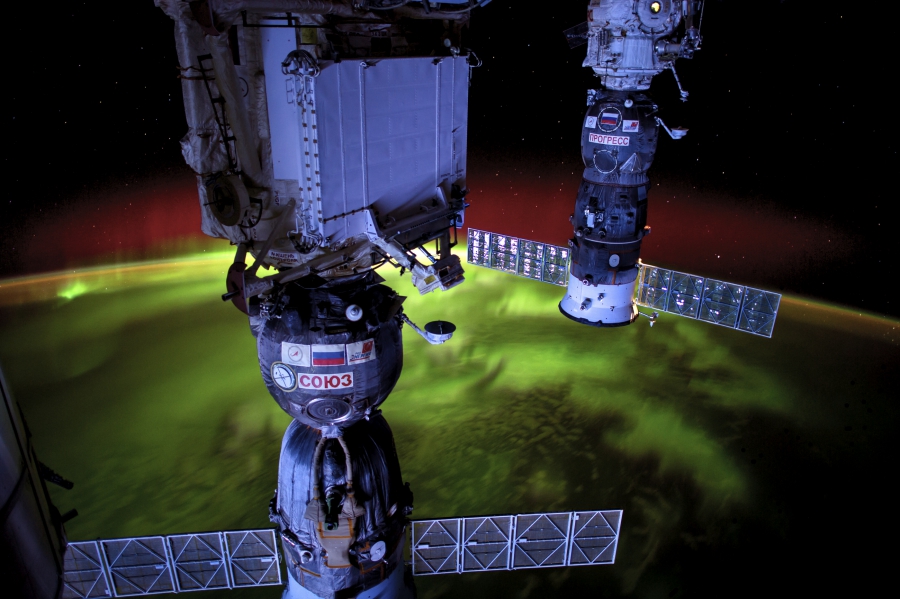 What are some of your favorite images that you’ve taken?
One of my favorite specialties is doing nighttime photography, and it’s partly because I consider myself an amateur astronomer, and I like wide-field astrophotography, which is just a fancy way of saying you put a camera on a tripod with a wide-angle lens, and you take pictures of stars from earth. So I basically did the same thing from the Space Station, taking pictures of Earth and the stars and the horizon. Those became my favorite subjects. Then I started to do the star trail pictures, which are about 30-minute time exposures. Those I just really, really like because of the artistic quality, but there’s also a number of scientific phenomena that show up in these pictures that you can only see from space, with a time exposure.

Were there some things that you just weren’t able to capture while in space, but wish you could have?
You know, you look at city lights at night. When I flew on my first mission, which was 2002-2003, there wasn’t a way to really capture those pictures because they were just too dim with the kind of cameras we had, which weren’t sensitive enough and had like a one-second exposure. You just can’t hold the camera still enough over a one-second period and do the tracking and get a good sharp image. So I put together this amateur astronomer device called the barn door tracker. It’s a very simple tilting platform that you can mechanically move with a rotating threaded bolt. You synchronize its motion with your orbital speed by looking at Earth through a telescope mounted on the platform and making the image motion stationary by rotating the bolt. Then you can take pictures with a camera that’s mounted on the platform.

Even so, there’s a certain quality of the cities at night that you just can’t record on film, or digitally. I think you can say the same thing if you see something marvelous here on Earth, like the Grand Canyon or Niagara Falls or some place like that. There’s a certain dynamic of being there that you just can’t capture on film. In space, you can do a good job of capturing something on film so that you can share it with everybody that didn’t have a chance to be there, but there’s no replacement for the human emotion and the artfulness of actually being there. 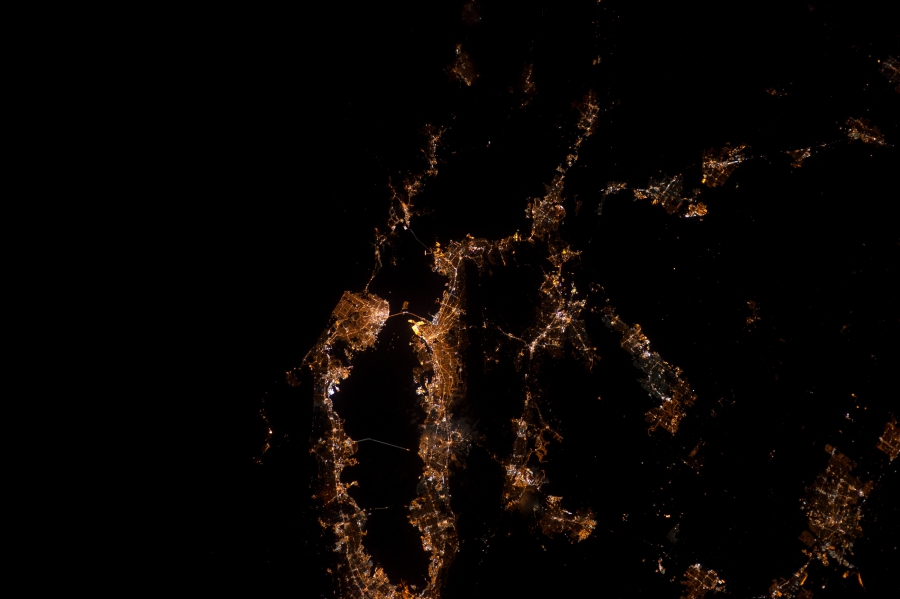