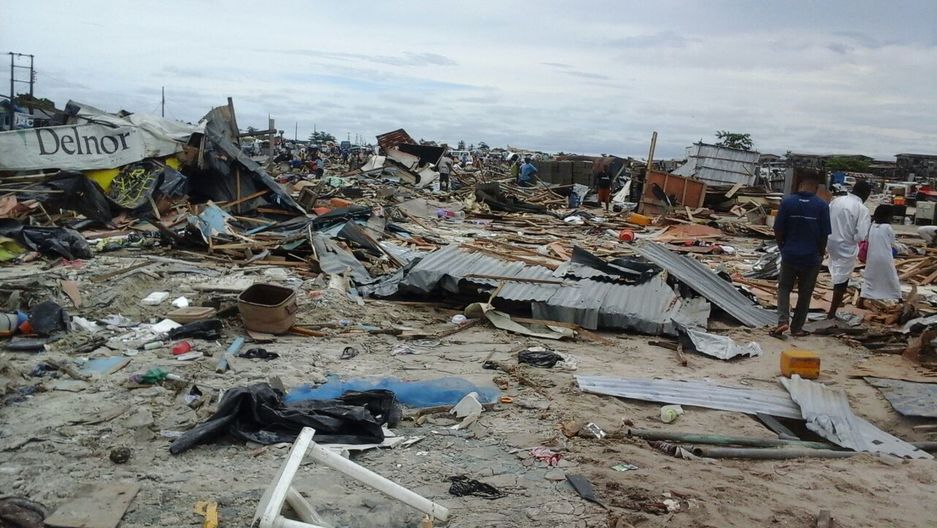 Homes in Small Kuramo, Lagos, were demolished in October 2016.

Courtesy of the Lagos-based Federation of Slums and Informal Settlements

Lagos, Nigeria, is a city of extremes. On one end is Eko Atlantic, a multibillion-dollar luxury island being reclaimed from the sea. It’s not done yet, but developers claim it will be Africa's Dubai.

On the other end is Orisunbare, one of hundreds of informal settlements in the city. It too is located on reclaimed land. But unlike Eko Atlantic, which is built upon layers of rock and sand, Orisunbare sits on compacted trash.

I am walking with a water vendor nicknamed Dangote. People call him that because he once worked in a cement factory owned by Africa’s richest man, a Nigerian named Aliko Dangote.

Dangote and I follow a thick bundle of pipes that tap into a main city water line outside the slum. Each pipe belongs to a different water vendor. Dangote has painted his pipe blue. Because the water connections are considered illicit, Dangote’s business is tenuous. The police often confiscate the generator he uses to draw the water to a distribution point outside his house.

“After raiding the old machine, we go there and bribe them and take our machine back. It makes our feet tired,” Dangote says. He would rather work above-board instead of paying bribes, but the water corporation refuses to formally connect Orisunbare to the grid. In September, the government went so far as to establish a special water court to prosecute water vendors like him.

After following Dangote’s pipe for about a kilometer, we finally reach his house. Here, his wife Mkeshi sells water out of three large storage tanks. Most families here spend about $2 a week on water — that’s about a tenth of the average household’s income. Mkeshi tells me about another complication: the nighttime water saboteurs. Occasionally, she wakes up to the sound of an overheating generator, a sign that someone has cut into Dangote's pipe and is siphoning water.

“They will just leave it there! They will not tie it back again. You have to go back again to trace it,” Mkeshi says. It’s a big problem, but she can’t go out and patrol the pipes at night. “Once it's 12 o'clock, I can’t go outside. This place is very dangerous. I’m a woman. All those bad boys around, they can easily come and attack me.”

The kind of insecurity Mkeshi describes underscores the degree to which people are on their own here. The police don’t patrol regularly in slums, so residents have to protect themselves.

In the nearby community of Otumara, a vigilante group runs a neighborhood watch. They meet underneath a traffic-logged overpass once notorious for violent carjackings.

“This bridge you see here at night used to be a death trap,” says Prior Ohunyon, who founded the group. If you are held up here, you pray hard.” Authorities blamed Otumara residents for the crime.

Every household volunteers a young man for the group. Patrick Agekamu became the chairman.

“We are the ones who did the job before the police. We know the bad boys here. They live within us. If a stranger came in, we know it’s a stranger.”

These days, each family in Otumara pays a monthly fee — about 75 cents per room in your house — to cover vigilante salaries, badges and uniforms. But Patrick says it's not enough.

“We only have cutlass,” Patrick laments. He pulls an ancient-looking machete from a chest. “You use this to confront someone with guns. It’s funny!”

The sense of insecurity in these communities extends beyond crime. It also stems from the reality that the government can come at any time and tear down your home.

I meet housing activist Samuel Okinrolabu in Orisunbare. He is standing on the edge of a wide drainage canal that runs through the slum. It’s the rainy season and the canal, which is full of sewage, is about to overflow. The ministry of environment is technically responsible for draining the canal, but Okinrolabu is hesitant to put in a request. Last time the government came to drain it, they bulldozed homes on either side.

“They come with heavily armed policemen that look as if they are going for war,” Okinrolabu tells me. “They use big grammar. Shanties ... uninhabitable. They use big grammar to qualify those communities, and before you know it, they start pulling down structures.”

We spoke in September. In October, the government called for the demolition of all illegal waterfront settlements, claiming they are environmental hazards and sources of violent crime. Suddenly more than 300,000 people were at risk of eviction.

Okinrolabu took to the streets. He sent me photos and videos of the protests he helped organize. In them, hundreds of slum dwellers sit blocking the gates outside the governor’s office. Then he sent me photos of freshly demolished Small Kuramo, a slum that had been home to an estimated 32,000 people. In the images, residents stand amid the wreckage, salvaging pieces of wood from broken homes. It looks like the scene after a tornado. I called Okinrolabu to find out more.

“They just came in with bulldozers. It was so pathetic, I was almost crying,” Okinrolabu tells me. The urban poor, he argues, are the engine of the Nigerian economy. “We are the majority consumer. We are the ones who work. We are the drivers, the cooks. You should not create a Lagos where you push us out. Rather make us included in the megacity plan.”

Okinrolabu is afraid. The government is acting erratically, and what happened in Small Kuramo could happen again, in another slum, without warning.

Okinrolabu writes again just days later. The bulldozers reappeared, this time in the community of Otodo Gbame. Anonymous arsons had lit fire to dozens of homes in the middle of the night. Shortly afterward, Okinrolabu saw Lagos police arrive and assist in burning down the rest of the slum. Several residents drowned in the lagoon while attempting to escape.

The government, however, denies any involvement in those fires. “It has got nothing, absolutely nothing to do with government,” says Commissioner for Information Steve Ayorinde.

But the commissioner defends the crackdown on “illegal waterfront shanties.” Waterfront areas are prime real estate, he says, that have been illegally settled by Nigerians from other states. “Government is not expected to look after everybody that has decided to migrate to Lagos. If government says where you are is illegal, I think it is only fair you should listen to the government, which has a panoramic view.”

That view doesn’t seem so panoramic to Okinrolabu — who knows that every time a slum is bulldozed, another one springs up somewhere else. “Naturally, we have to find a place to sleep.”