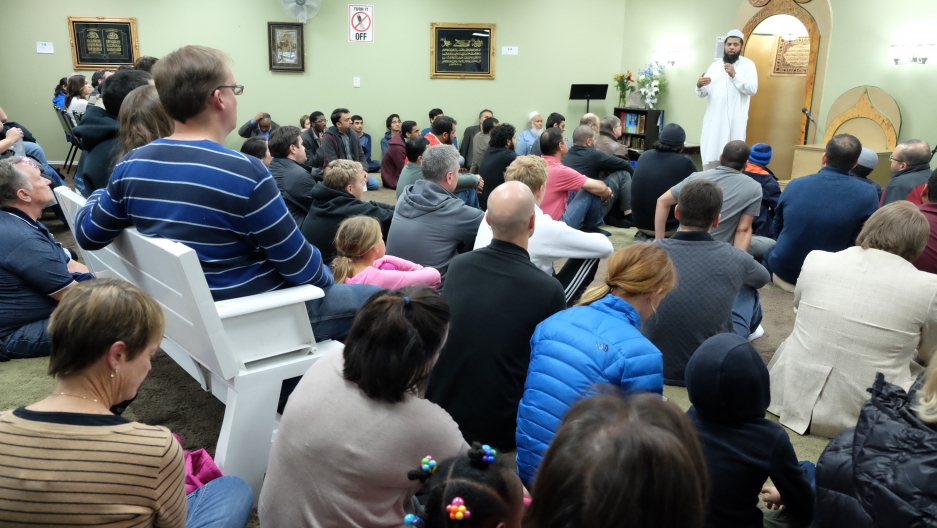 A Friday night "Meet the Muslims" session at the Utah Islamic Center in Sandy, Utah. Members of the center started them after the election of Donald Trump.

In the wake of the US presidential election, a Utah mosque has opened its doors to the non-Muslim community. They’re holding Friday night information sessions called, “Meet the Muslims.”

The Utah Islamic Center is tucked inside a strip mall in Sandy, a suburb of Salt Lake City. Shoes fill the entryway shelves and spill out onto the floor. In the front, a few rows of men are doing their regular Friday evening prayers. The rest of the room is packed mostly with non-Muslims. 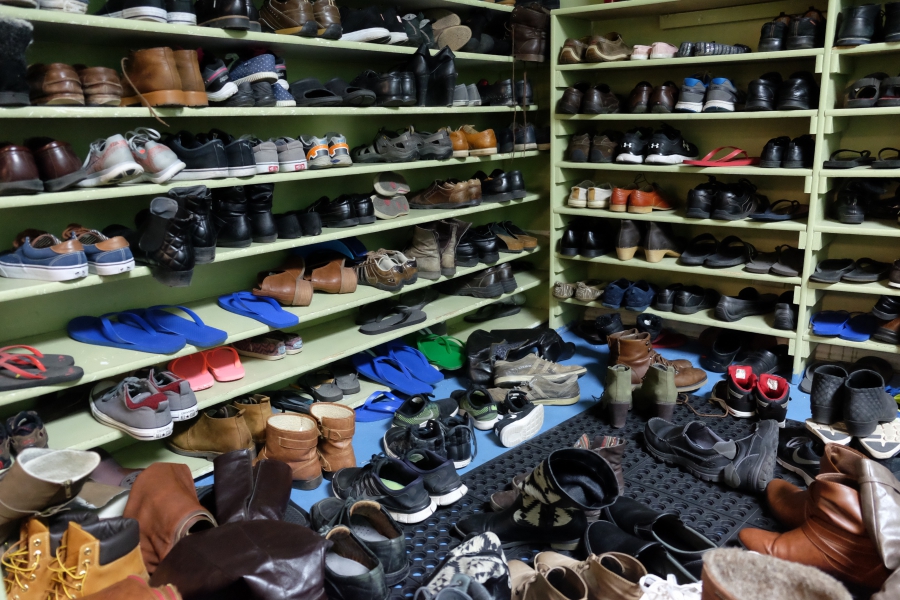 Shoes spill out onto the floor at the Utah Islamic Center's Friday night information sessions. Visitors and worshipers have to remove their shoes.

“Looks like we have a shortage of chairs,” says the imam, as he invites people to sit on the floor. He tells the crowd that he has been overwhelmed by emails, cards and calls of support since the election. He presents the basic tenets of Islam and then answers questions.

After the imam's presentation, there are snacks and a chance to mingle. There’s a mix of people here — those who have never been to a mosque; academics and students; families with children; and liberals as well as conservatives like Ben McClintock, who says he voted third party.

“As a conservative, I want to let them know that there are conservatives that don’t believe all the propaganda about Muslims,” McClintock says. As a member of the Church of Jesus Christ of Latter-day Saints, he feels some solidarity with Muslims. In the 1800s, thousands of Mormons fled Missouri after the governor ordered them “exterminated.”

So when President-elect Donald Trump talks about banning Muslims from the US, that strikes a nerve. “I think with our past persecutions, we’re a little more open to the idea of making sure that government isn’t given the power to persecute a people,” McClintock says.

The Muslims here at this mosque say that Utah is a welcoming place to live, and that Mormons, who have traveled the world on religious missions, are open to different cultures.

“Mormonism and Islam share similar beliefs and practices,” says Imran Raja, who tells me he was born in Africa and grew up in California before settling down here.

“We don’t drink alcohol, we don’t like to gamble, and then we’re also very focused on our families. It’s been a more desirable place to be as a Muslim compared to other places.”

While many Utahans were openly critical of Trump’s nomination, a lot still voted for him; 45 percent statewide.

“It was an eye-opener,” says Taiyaba Khan, a Muslim born in India who has lived most of her life in Utah and Wyoming. “It’s a little uneasy feeling. It makes you wonder, you know, who secretly must be hating you.”

She’s not surprised that Utah would vote Republican, but she doesn’t know what motivated those votes.

“We personally even know Muslims that voted for Trump, just because they wanted [the] establishment gone and things needed to change. You know, you don’t know the reasons it really happened. You’re hopeful it’s not just hate,” Khan says.

Another Muslim woman here, Sarah Chaudhry, was born and raised in Utah. She says Trump’s election revealed divisions she didn’t know were there.

“It’s just like we thought maybe you understood our point of view. We thought we were OK in that sense,” Chaudhry says. “I actually have a really good friend of mine who I’ve known since high school. She voted for Trump. Her vote was [about] abortion. [The] underlying factor is that you were OK with that then.”

At this point, a 7-year-old girl named Amina pulls on my sleeve and suggests that I interview her mother, Alison Schlicter.

“My youngest daughter is black,” Schlicter says, looking down at Amina. “She’s an immigrant, and she has a Muslim name, and I have another daughter who is gay, and people that voted for Trump, I feel, are a danger to my family.”

Schlicter, who grew up in New York, is a member of the LDS Church, but doesn’t consider herself religious. Right now, she’s pretty angry at fellow Mormons who voted for Trump.

“I feel quite betrayed by them insisting on their religious freedom and then electing Trump.”

Her daughter, Amina, says that since the election, she’s been afraid she will be sent back to Ethiopia. But this event at the mosque has done something for her.

“It makes me feel a lot better because I know that there is tons of people that know how I feel,” Amina says. Her mother says it’s been a lesson for everyone.

“One of the speakers up here talked about improving your community by knowing individuals from other walks of life, and I think that’s really key,” Schlicter says. "It’s a choice to open yourself to exposing yourself to other people that aren’t the same as you.”

Most of the Muslims at the mosque had stories of people reaching out to show their support — non-Muslim friends, coworkers, neighbors and even strangers. For some, the election was an unwelcome wake-up call. But it was also an opportunity to come together and talk.