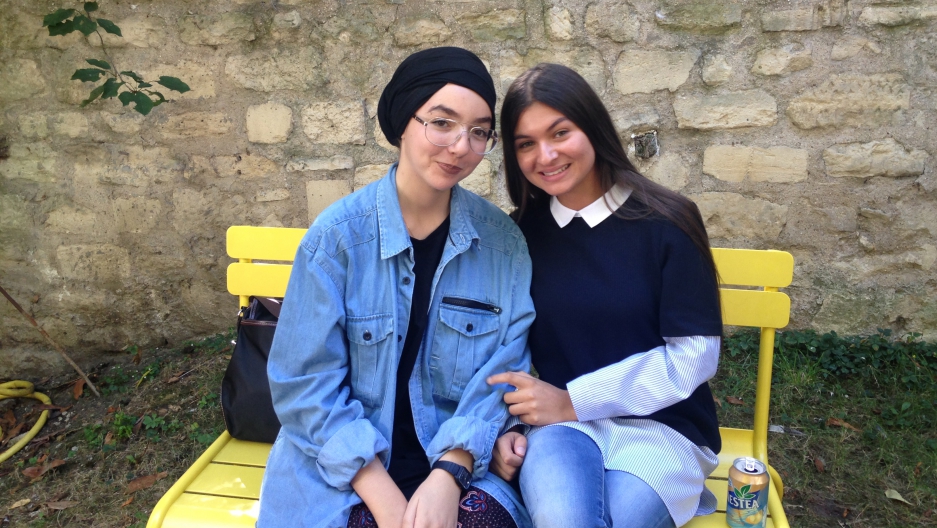 Sirine Bidjou (right) and Hanifa Benrahou (left) are both students at Sciences Po, which they entered through the CEP program. It's France's answer to American-style affirmative action.

The odds were stacked against Mamadou Sissoko arriving at Sciences Politiques, better known as Sciences Po, one of France’s most elite universities. He was born in Mali, and at the age of 7, moved to a Paris immigrant suburb. It’s a place where people don’t talk much about the highest echelon of the country’s higher-education system.

“I didn’t know what Sciences Po was,” Sissoko says, “until my last year of high school.”

He entered the highly selective institution through an unusual admissions program, known by the acronym CEP, designed to expand access to disadvantaged students.

The pioneering model was introduced at Sciences Po in 2001. And it takes a different approach to widening opportunities — one based on the very French approach to geography.

To get into Sciences Po, students typically have to pass a written entrance exam and make a presentation to a juried panel. The CEP program introduces an alternative entry process for students from about 100 specially chosen high schools in state-determined priority education zones, based on factors including income and educational success rates.

These districts are largely located in lower-income suburban and rural areas.

In Sissoko’s case, instead of taking the written exam, he prepared a research project in his final year of high school — he chose to write about the Chinese stock market crisis of 2015 — before presenting two separate oral presentations.

In August, he began classes in Sciences Po’s satellite campus in Reims, outside Paris, located in a former Jesuit school for boys that was built in the 16th century.

An alternative to American-style “affirmative action”

The program was born from the observation that low-income students were underrepresented at France’s most selective universities, says Hâkim Hallouch, director of equal opportunities and diversity programs at Sciences Po. Hallouch was part of the first CEP class of 2001 and now oversees the program for the university.

CEP was inspired by the American model of affirmative action, but its structure was informed by French ideas about egalitarianism and racial and ethnic differences.

Singling out students based on their personal characteristics was out of the question, says Sciences Po sociologist Agnes van Zanten, a researcher who focuses on education and inequality.

She says there was language on the CEP website early on highlighting the encouragement of greater racial and ethnic diversity in the student body, but it rapidly disappeared.

“The idea was not to put too much emphasis on affirmative action,” she says, which “would have given way to a very heated debate.”

Still, the program wasn’t without controversy or comparisons to the American system.

There is an archived video online of a televised debate that Hallouch took part in, in 2004, while still a student, with classmate Laurent Manjole, who insisted the CEP program introduced “a policy of quotas” in French higher education that would be “contrary to all French tradition.”

According to Sciences Po, there is no set quota for CEP students each year. Around 1,600 students have been admitted since 2001.

There are still student groups who argue the CEP program lowers the value of a Sciences Po diploma, but first-year CEP student, Sirine Bidjou, believes “It’s part of the mentality now, the fact that Sciences Po opens its doors to students from working-class neighborhoods.”

She and a number of other CEP students say they prefer the path they followed over American-style affirmative action.

But it turns out that while geography can be a useful proxy, it’s not a perfect indicator for combating inequality.

“We have observed,” says van Zanten, “that the people who have been profiting from the [CEP] policy are not necessarily those most in need.” She says about 40 percent of students who come to Sciences Po through these partnerships are not from lower-class backgrounds.

Poverty, she notes, is less concentrated in France than in many US neighborhoods, so CEP can have the effect of disproportionately benefiting the higher-income students in these disadvantaged high schools.

It has actually had a more substantial impact, she believes, in terms of increasing ethnic diversity, particularly the number of students from immigrant backgrounds. These young people, she said, often have higher educational aspirations.

Representing diversity in a rarefied setting

Anais Khaldi, who entered through CEP, and is now pursuing a master's degree at Sciences Po, was initially nonplussed to find herself considered a “minority” student. In the exceptionally diverse Paris suburb where she grew up, she had considered herself integrated into French society, despite her North African background.

“You have a hard time figuring out what's your place,” she says of Sciences Po, “because you're questioned a lot about, ‘Yeah, but you came here just by affirmative action — do you think you could get in if it wasn't by this specific program?'”

She says the relative lack of means of some students from lower-income Paris suburbs made it harder to socialize because of the cost of hanging out in bars or the difficulty of getting home at night once the regional trains stopped running.

Sociologist van Zanten approves of the diversifying of elite French institutions, but also worries that educational policies in France increasingly focus on “rescuing” the best students from poor neighborhoods rather than trying to increase opportunities for larger numbers of students. Another recent program introduced nationally, meilleurs bacheliers ("best bachelors"), provides additional opportunities to the top 10 percent of finishers in the high-school final exams.

CEP student Mamadou Sissoko notes he’d like to see more done to expand opportunities for friends from his old neighborhood.

“We’ve shown the world that we can succeed,” he says, “but also that there are others behind us. We need to do more to help even more people.”