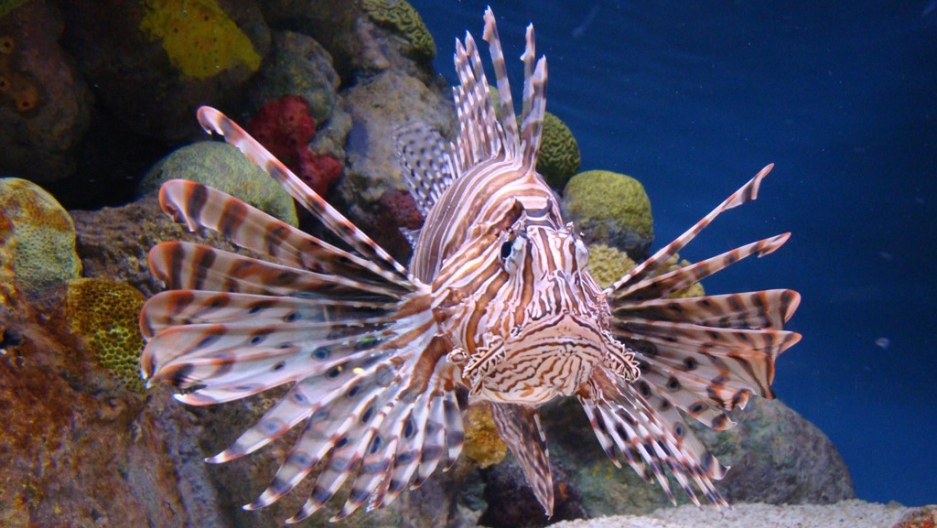 This is a lionfish at the Boston Aquarium.

With its arsenal of spiny, venom-tipped fin rays, the lionfish is not a typical (or easy) ingredient in your fish tacos. But at Norman’s Cay, a restaurant in downtown Manhattan, lionfish comes grilled or fried — and its mild white meat is starting to show up in other restaurants in Florida and New York.

That’s because the predatory lionfish, native to the Indo-Pacific, is invading the Atlantic Ocean in a big way. Experts believe the first lionfish population here may have been released by humans, as they're popular in home aquariums. Now, they're prevalent in the Caribbean and Gulf of Mexico and have been spotted all the way up the East Coast of the United States. As part of an effort to curb lionfish, conservationists and foodies alike are trying to get us to eat more of it. Results have been mixed, but not for the reasons you might think.

“They are a challenge to catch,” says Maia McGuire, an agent with the Florida Sea Grant Extension, one of the organizations trying to get rid of lionfish in coastal waters. “They like to be on reef areas or areas with structure, and they actually like being under ledges a lot of the time — so it’s not a great place to drag a net. They don't really take a hook very well.”

That leaves humans to a job that sounds more like hunting lions than fishing: According to McGuire, most lionfish are caught by divers armed with spear guns or nets. “So it’s pretty labor-intensive fishery,” she says.

Labor-intensive it may be, but singling out lionfish (somehow) is a critical task. Lionfish are ravenous predators, consuming over 50 species of fish, and their rise in Atlantic coastal waters is bad news for native predators like groupers and snappers. In one study, scientists watched a single lionfish in the Bahamas eat more than 20 smaller fish in a half-hour. They also noted that it wasn’t unusual to see lionfish scarf down prey that were two-thirds their own length.

“The problem is [lionfish] are eating the same food that our native fish would like to be eating,” McGuire says. “And they're also eating the juveniles of our native predatory fish.”

McGuire isn’t sure who first came up with the idea to promote lionfish as a tasty, environmentally friendly food. But she suspects that with the invasion of lionfish, someone — or some people — wondered what could be done with the newly abundant fish.

“So folks tried them, and they found that they're actually a very tasty fish,” she surmises. “It's a mild white fish and they take seasoning well, chefs like working with them, so it kind of seemed like the perfect solution.”

Perfect, that is — if conservationists can figure out a better way to catch them. McGuire says several teams are trying to design a perfect trap for lionfish, which have been found both in deep and shallow waters. As of now, she admits, the trap is still a work in progress.

“We don't want to be catching all of our native fish in those traps while we're trying to get the lionfish,” she notes. “So that's the challenge.”

Until then, lionfish remains a delicacy caught by hand. But in this case, conservationists are begging you to eat your fill.

“A single female lionfish can release up to 2 million eggs in a year,” McGuire says. “So I think we'd have to work really, really, really hard before we had to worry about running out of lionfish.”