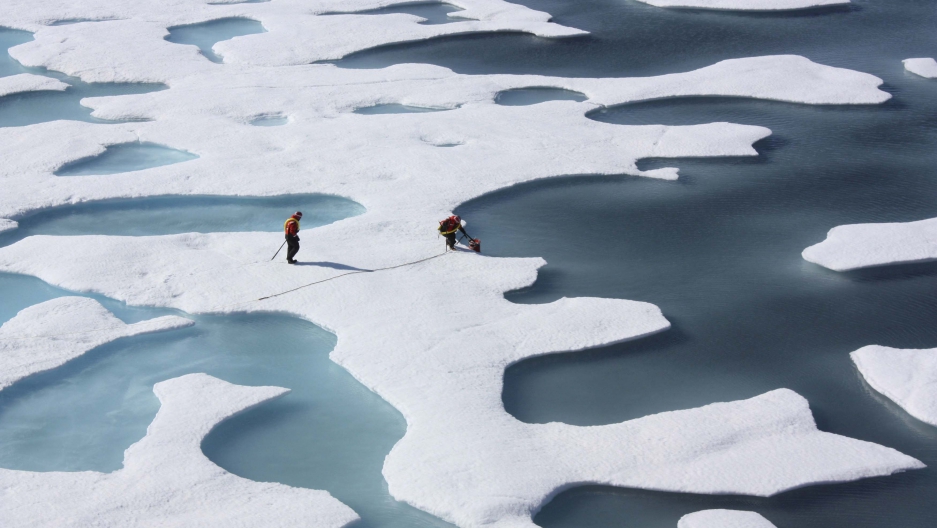 Freshwater ponds appear atop the Arctic ice cap during the summer melt.

A new report warns that current levels of Arctic ice melting could trigger key "tipping points" leading to catastrophic and uncontrollable climate change. If these tipping points are reached, the effects would become their own drivers of global warming, regardless of human attempts to reduce carbon emissions.

The Arctic Resilience Report is the work of 11 research institutions from around the world, including six universities and the Arctic Council, a forum of Arctic states. Its lead author, Marcus Carson of the Stockholm Environment Institute, told the Guardian that "the warning signals are getting louder" and that current Arctic conditions "make the potential for triggering ... much larger."

A number of the tipping points relate to shrinking areas of ice, both on sea and on land. As you might expect, sea ice and land ice are both highly reflective, acting like mirrors reflecting much of the sun’s energy back into space.

When ice cover is reduced, that energy is instead absorbed as heat, leading to a rise in temperatures. This, in turn, triggers further melting and additional temperature rises.

The Guardian’s Fiona Harvey says the risk of ignoring these potential triggers is severe. “There are many of these tipping points — and this has the potential to create a runaway form of global warming that ... would be very, very difficult to stop."

Scientists have expressed shock at the huge increases in temperature currently being recorded in the Arctic. Temperatures for November would normally be around -13 degrees Fahrenheit (-25 Celsius). Instead, this month they have been about 32 degrees Fahrenheit (0 degrees C). In addition, sea ice coverage is down 30 percent from levels 25 years ago, and is at the lowest levels ever recorded for this time of year.

“That’s not a minor fluctuation,” says Harvey. “That is what scientists call way-off-the-charts. We need to understand that the problem is growing ever more urgent."