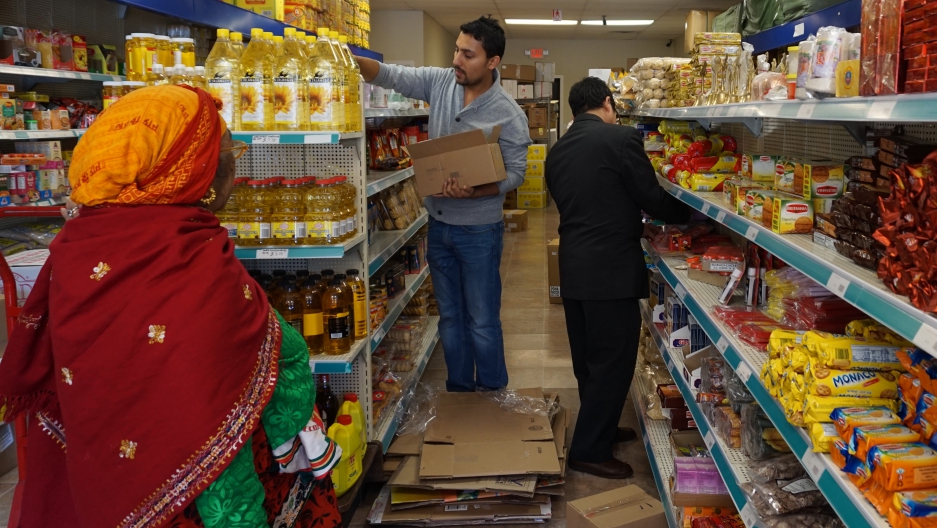 Much of Erie, Pennsylvania is a food desert — people don’t have easy access to fresh or nutritious food. But in one stretch of Erie, on and around Parade Street on the city’s east side, stores run by refugees are popping up and making a big difference.

At UK Supermarket, Samantha Dhungel pulls bags of vegetables out of the freezer. In her cart are onions and eggplant, but she pulls out a vegetable she only knows by its Nepali name. It's a leafy green that her Nepalese husband uses in his cooking.

“This helps a lot because you can’t find stuff like this in Walmart or K-Mart or wherever people shop,” she says.

And you can’t find stuff like it in much of the city. Before this store opened two years ago, there were a couple convenience stores and a few fast food spots around. All of them sold food that wasn’t nutritious, says Alex Iorio. She’s the public health educator for the Erie Department of Health. She says this place is different.

“This store has tons of whole-grain rice, whole-grain meals, flours, things like that," she says, "lots of dry beans and peas, which are high in protein. So all those are considered healthy, and our store owners like carrying items like that because they have a longer shelf life."

The stretch of parade stretch where UK Supermarket is isn't a food desert anymore. It's one of about 20 grocery stores that have popped up in Erie in the last decade, run by former refugees.

Most of the stores carry fresh foods and whole-grain items. Before, if people in the neighborhood wanted fresh vegetables, cornmeal or nuts, they’d have to drive across town or to the suburbs.

“I looked in the community and found that there really is a need for Asian-based stores in Erie, which we really don’t have too many,” he says.

He wasn’t trying to solve the food desert problem — none of the store owners were. They just wanted refugees in Erie, who make up 10 percent of the city, to have access to specific foods.

People would drive distances and buy up items like jackfruit and halal pizza. Then they’d resell those items to people in their community. Upreti saw a business opening there.

“I wanted to do more, like a lot of people having to travel to Pittsburgh or Cleveland just to get groceries didn’t sound too good to me,” he said.

Upreti’s store carries mostly South Asian foods. Across the street is an Iraqi owned store that carries lots of spices. Around the corner, another Iraqi store specializes in fish and meats like lamb and goat. And there are well over a dozen more stores like them.

Upreti says he gets customers from everywhere, and the majority of customers are longtime residents of the area.

“Indian and Nepalese are the biggest two ethnic groups, along with African, Arabic Americans and some Vietnamese and some Burmese,” he says.

Iorio from the health department knows this spot because she runs Erie’s Healthy Corner Store Initiative, which helps Pennsylvania cities that have food deserts.

She visits the stores to ensure they have healthy foods on their narrow, packed shelves. If they do, they get rewarded — $100 a year, new shopping carts or vegetable display cases. She doesn’t know where people got their groceries before these stores started popping up.

“There were always some corner stores,” she said. “But we think people are going to buy what they have access to and what they’re used to.”

Having these stores here isn’t a full-on solution. As stocked as they may be with whole-grain rice and vegetables, people still pick up other things. Like Swapna Sibarim, whose shopping cart is full.

And as she pays for her vegetables, rice and yogurt, there are a few other things — like ingredients for some sweet desserts.