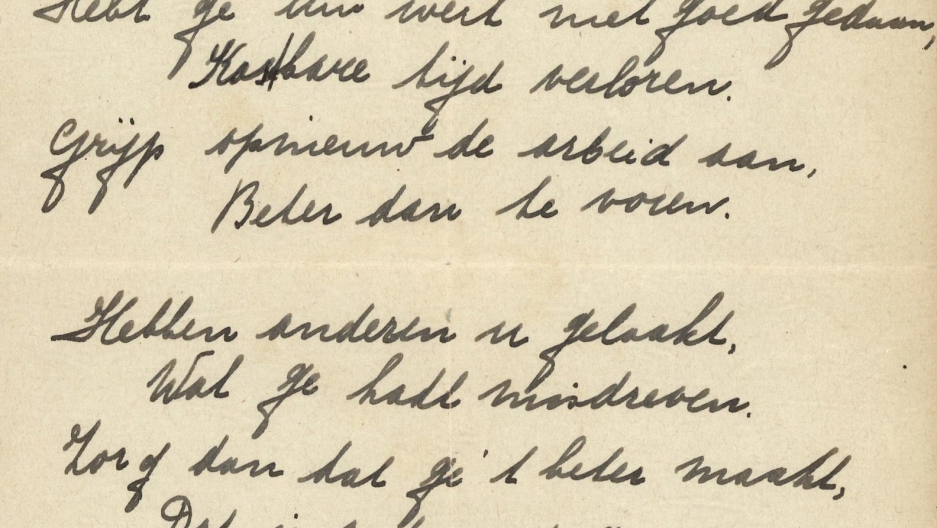 Anne Frank's poetic letter to her friend, Christiane, was sold today to a private bidder.

In March 1942, a schoolgirl in Amsterdam took out a pen and paper and began copying a poem encouraging her close friend to work hard. "Dear Cri-Cri, if you do not finish your work properly and lose precious time, then once again take up your task and try harder than before ... "

Cri-Cri was a pet name for Christiane van Maarsen — and the girl who wrote to her was 12-year-old Anne Frank. Three months after writing to Cri-Cri, Anne and her family disappeared into hiding from the Nazis. She was eventually killed at Auschwitz.

On Wednesday, that single page of poetry in Anne's handwriting was sold at an auction in the Netherlands. Auctioneer Thijs Blankevoort told the BBC that the letter is a record of a period of relative normalcy for Anne, which was soon to end. "This was written by Anne Frank who was a free little girl. The Jews were being deported en masse to the camps — all the Jews in Amsterdam were in huge danger."

Cri-Cri was also Jewish, under Nazi law. Her sister Jacqueline is now 87 and was Anne's best friend. Cri-Cri died in 2006, according to the BBC. Speaking to the BBC's David Whitty, Jacqueline said she still remembers their friendship. "She was a very lively child — and that's what I liked, and I was just the opposite. She once said to me, "that's why we are so good together, because we are so different."

Unlike the Frank family, the van Maarsens did not go into hiding. Instead, Jacqueline survived because her mother succeeded in having the family reclassified from Jewish to Christian. "That saved me," she says. "[Mother] went to the German authorities, and said 'I'm not Jewish and my children are not Jewish either." Jacqueline and the rest of the family were able to remove the yellow stars they wore every day.

Life for the van Maarsens was still filled with danger, according to Jacqueline. "In the middle of the war, suddenly I was not Jewish anymore, and I went to the non-Jewish school. And it was very difficult for me. People didn't talk about Jews at that moment anymore. The indifference of the Dutch people was for me very painful ... Nobody talked about the Jews anymore."

Anne's poem to Cri-Cri was sold to an anonymous buyer for $148,620 — more than four times the minimum bid.