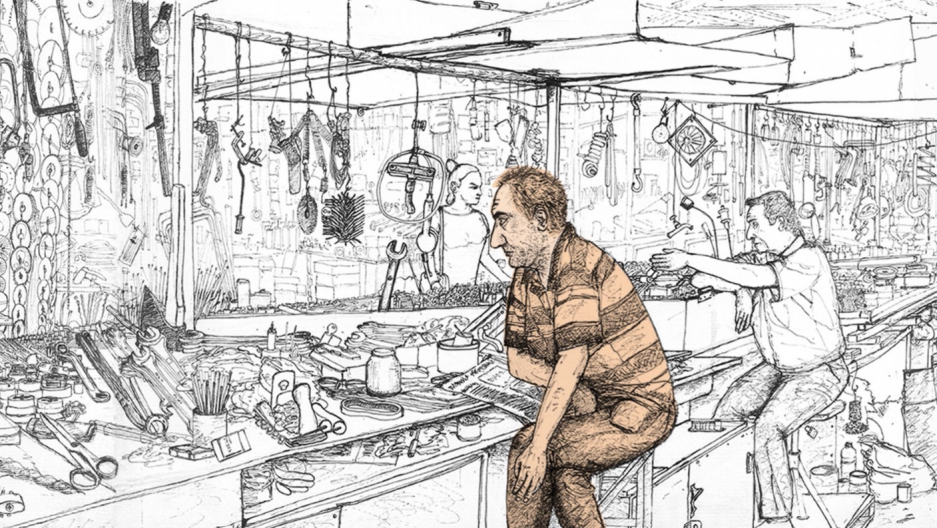 Eduard, "the Skeptic," from Andrew North's "The Big Draw: Selling the Soviet Past."

You won’t find it in the Tbilisi guidebooks, and it’s well beyond the tourist trail. But the first time I came to this sprawling open-air hardware market in the Georgian capital, I thought to myself: “I’ve got to draw this place.”

I had come as a customer, to buy some things for a home DIY job. But I found myself in a "Home Depot" for the Soviet past, and the artist in me was fascinated.

Hidden behind an outer row of newer shops is a vast labyrinth of tightly packed stalls trading in Soviet-era engines, electrical equipment and heavy tools. Known as the Eliava (after a nearby street), it sprang up in the hard years after Georgia won its independence from the USSR in 1991. There are hundreds of stallholders, with an inventory that ranges from Russian nuts and bolts, to gearboxes and septuagenarian power motors that once drove Soviet Metro escalators. And I decided to turn this mass of history into a drawing.

I focused on one part of the market and set about creating a 360-degree panorama of everyone and everything in my field of view. And after nearly four months of work, always standing in the same place, it became a 4-meter-long ink drawing.

I started with Vazha Jamagidze and the metal smorgasbord of Russian-made hand tools and reconditioned bathroom taps that he sells from two small benches. He has worked here for more than 20 years, but his solid arms and shoulders speak of another life before that, when he was a Soviet Army wrestling champion. As I got to know him and the other stallholders, the journalist in me saw a wider story here.

This is a free market selling the communist past — where some still wish it were the present. So it offers a unique window on Georgia’s transition and its often-tortured search for a new post-Soviet identity, pulled between West and East.

Everyone in the drawing grew up in Soviet-run Georgia; and some have struggled to adjust to the fast-changing country that has replaced it. Whereas most Georgians now lean West and resent Moscow’s past and present intrusions, among the denizens of the Eliava there is a more sympathetic attitude toward Russia and Soviet rule.

It’s also more complex than that.

... The bigger challenge was drawing each person in my 360-degree frame, working as quickly as I could before they moved, with the added pressure that they could see the result as soon as I had finished. That’s the paradox and the excitement of drawing. It is both slow and immediate.

That made it an attraction too, as the panorama took shape, with stallholders coming from further away to look and laugh at how I had portrayed their friends. “It’s not bad,” smiled one visitor as he looked at my version of Eduard. “But you haven’t made his nose big enough.”

Sometimes there were arguments, once even a fight. If I happened to be there on a key Orthodox holiday, such as "Mariamoba," or someone’s birthday, I could forget working.

They took my pens away and gave me wine instead. And Tariel, whose collection of muscular Russian motors I drew early on, locked away the drawing in his storeroom.

Andrew North is a British journalist based in Tbilisi. Check out his complete interactive story, "The Big Draw: Selling The Soviet Past."