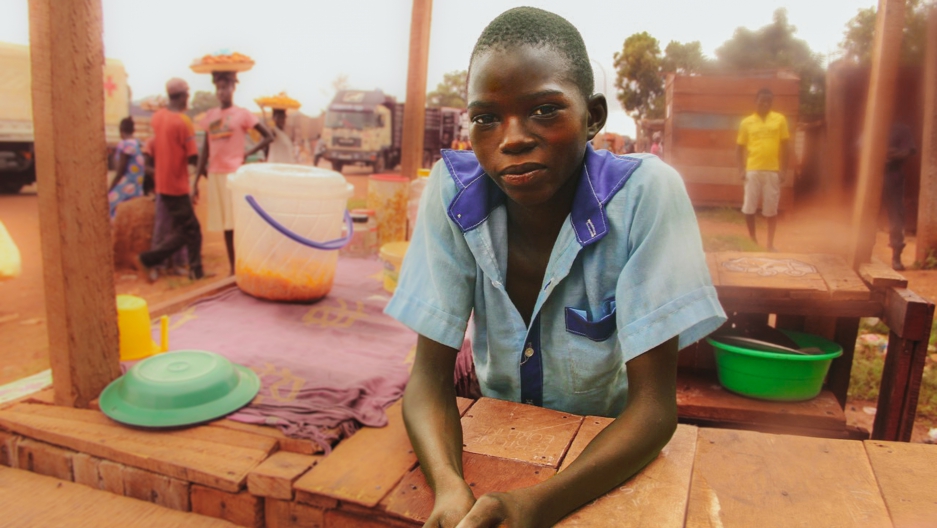 Fortuné gets up at 4 a.m. to prepare homemade spaghetti, which he starts selling at his stand at 6 a.m.

The day starts early in Bangui, the capital of the Central African Republic. At 6 a.m., the crossroads called Place Marabena are already bustling. A year ago, rival militias were clashing on these red dirt streets, but now, vendors hawk bunches of overripe bananas and memory cards. Long lines of people wait to pile into beat-up taxis. Men lie in the dust, tinkering with a broken-down jeep.

Nearby, a boy stirs a pot of bubbling coffee over a small fire. Next to him is a ramshackle wooden stand stacked with plastic dishes. In block letters, he has written his name on it: F-O-R-T-U-N-É.

When school let out for the summer, the 15-year-old saw an opportunity to make some cash selling food at Place Marabena. He borrowed money from relatives to get his business going, and now he peddles coffee and his favorite dish, spaghetti, to passersby.

For him, this little stand is step one to living up to his name. In French, fortuné means to be lucky and rich. It’s a tall order for a kid from one of the most underdeveloped countries in the world.

“I want to be a big businessman — it’s all that I want,” he tells me in French. Fortuné is tiny; he looks more like 10 than 15. But when he talks about his business, he is focused and serious.

Fortuné tells me he would like to own a fleet of taxis or a chain of restaurants. He wants to make enough money to support his friends and family. But that’s in the future. For now, he has customers waiting.

“Be careful, it’s really hot,” he warns, balancing a small plastic cup of coffee as he strides across Place Marabena. Fortuné is half the size of the men working on Place Marabena, but he marches through the crowd with confidence, delivering the coffee to a customer waiting to get his car fixed.

The man, who works as a driver, tells me he buys coffee from Fortuné three times a day. He says he always wants Fortuné’s coffee because le petit — "the little one" — makes it really well.

Fortuné glows. He tells me the spaghetti he makes is just as good — so good, in fact, that he usually empties out his big plastic container by noon: Apparently, spaghetti for breakfast is all the rage on Place Marabena. 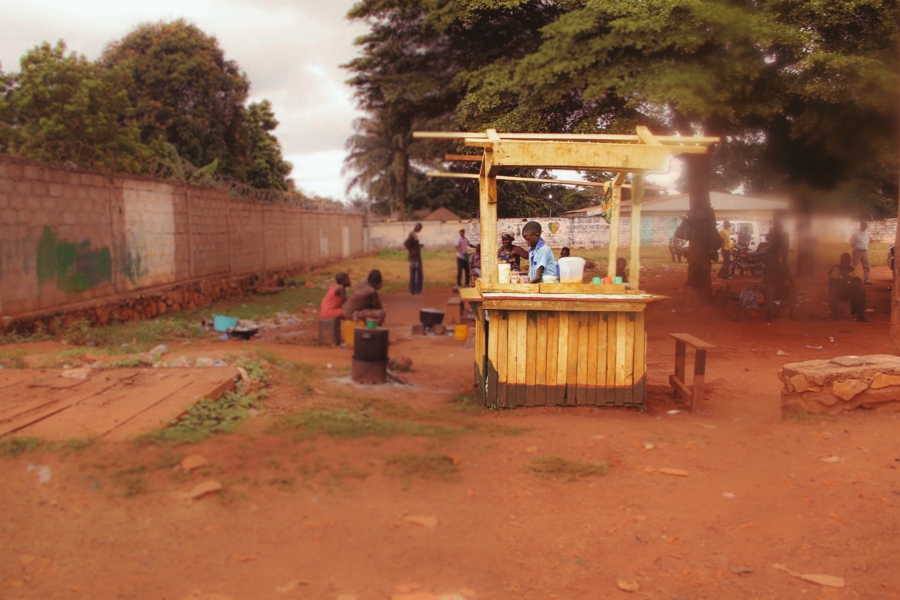 Fortuné has given his stand a grand name: Efficace Divine, which means "Divine Efficiency."

Fortuné has given his wooden stand a grand name: Divine Efficiency. It reflects his strategy for both business and life. One, be efficient, a good businessman. Two, pray a lot because in the Central African Republic, it is good to keep God on your side.

“When I sell, I praise God,” he says. “And that praise touches people’s hearts, and they come and buy from me.”

Fortuné believes that God has a soft spot for orphans like him. His unwavering faith carried him through extremely difficult times. In 2013, the Central African Republic was torn apart in a power struggle between rival militias that descended into sectarian violence. Many civilians were killed and hundreds of thousands were displaced, among them, Fortuné and his family.

The family fled their home in December 2013, after a failed coup against the ruling rebel government prompted a violent retaliation across the capital. They ended up in a refugee camp where Fortuné’s mother died the following year.

Elbows propped on his stand, Fortuné closes his eyes and sings a hymn in French that she used to sing him.

There is no one behind me,

No one ahead of me.

You are everything to me, oh Jesus.

Don’t put your faith in a man,

Because a man could betray you

Instead, put your faith in Jesus

And you’ll see, he’ll act in your life.

After elections earlier this year, the Central African Republic has moved into a fragile peace. All across the capital, people are picking up the pieces of their lives and hoping that violence doesn’t break out again. Fortuné and his sister now live with his great-aunt Jocelyne Kibinda, a house cleaner, not far from Place Marabena.

The house is small and neat. Perched on a small sofa, the immaculately dressed Jocelyne says she took in the children because they had no one else.

“I couldn’t leave them like that,” she says. “They’re my blood.”

She thinks Fortuné gets ahead of himself with his plans and dreams.

“He told me he wanted to travel to Cameroon to buy things to sell,” she says. “I told him he was too young to go, that he’s just a kid still. But you know kids, they want to follow their hearts. I tell him to be patient.”

She wants him to focus on school and making up for the months they missed out on education.

While the family uses some of Fortuné’s earnings to make ends meet, most of it gets tucked away for school fees. 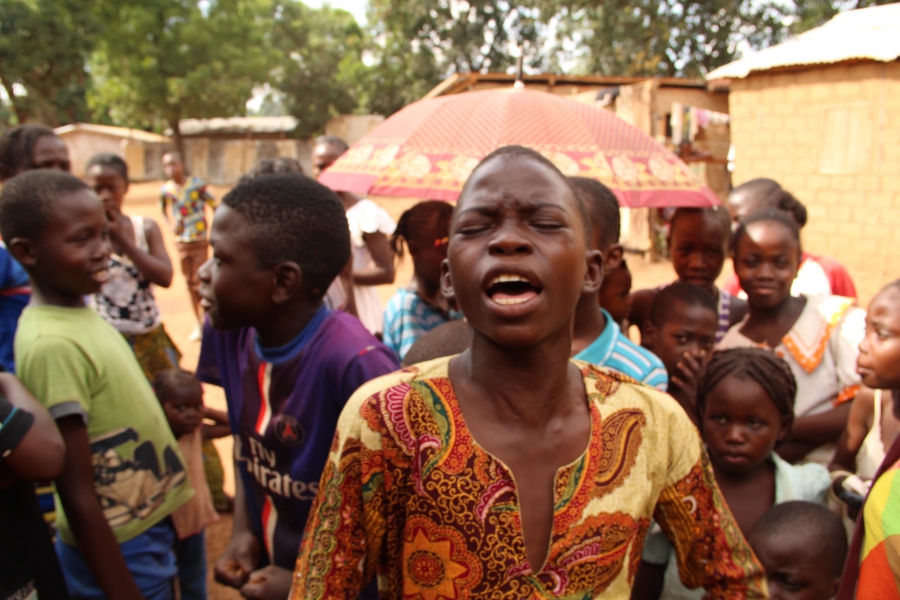 Fortuné pours his heart into singing a hymn outside of his home in the Miskine neighborhood in Bangui.

Outside the little house, Fortuné is pouring his heart into what he calls a singing practice with a crowd of neighborhood kids. Eyes closed, he throws his arms up to the sky. He sings about God, the father of orphans. And prays that he’ll become a great man, despite all the odds.

But a few days later, Fortuné’s luck falters. Divine Efficiency was robbed by a couple of customers, and he had to shut it down. He was back at square one.

But Fortuné is one tough kid. And when I last spoke to him, he was already back to selling coffee and spaghetti.

Brenna Daldorph traveled to the Central African Republic in July as a fellow with the Great Lakes Reporting initiative, run by the International Women’s Media Foundation.