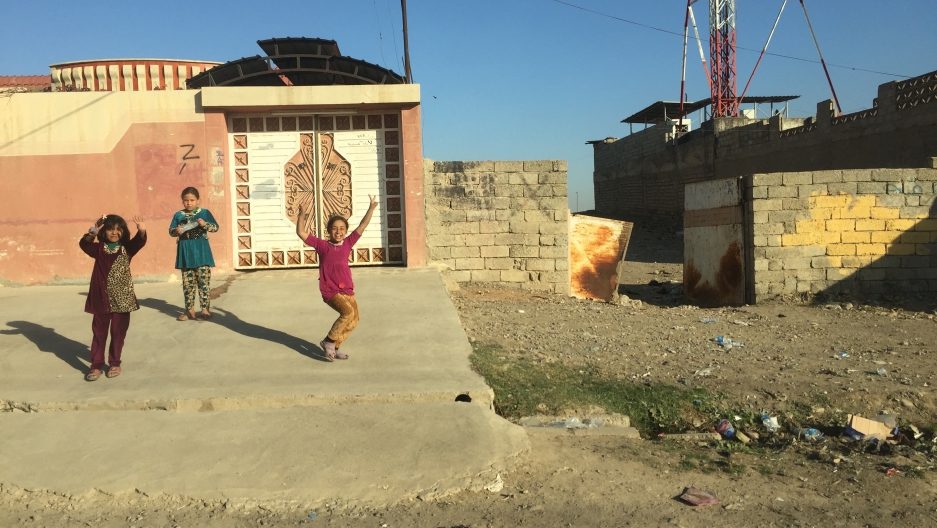 As the Iraqi army pushes deeper into the densely populated neighborhoods of Mosul, more civilians are escaping the Islamic State’s clutches every day.

But to be liberated in this city is a dangerous business. Fierce battles have arrived on the doorstep of residents in the east of the city, and to escape they have to negotiate their way through a hail of sniper fire, mortars and airstrikes.

Civilians who make it across the front line recount deadly journeys from their homes to an uncertain future.

“We’ve been living in those empty houses for a week now,” says an elderly man who escaped just minutes earlier from the Sukar neighborhood in the east of the city.

“We were being bombarded. We lived in a block of four buildings, the drones completely destroyed them. We realized that situation was not good, we were worried about the kids, so we left,” he adds.

The man, like most fleeing the city, did not want to give his name because some of his relatives are still in ISIS-controlled neighborhoods, and he fears they may be targeted by the group.

He came with his family to the relative safety of Samah, in eastern Mosul, following an escape route many others have taken: First they relocate to empty homes in contested neighborhoods near the army line, then they wait for Iraqi special forces to capture the area, or they find a corridor through which to escape.

Residents trickle out from the front lines to the relative safety of Samah, a neighborhood in eastern Mosul.
Credit:

With ISIS fighters blocking anyone from exiting the city, this deadly routine is one of the few ways to leave.

One incident caught on camera shows how the front-line chaos can lead to civilian deaths. In the clip, shot by a CNN team embedded with counterterror forces when they first entered the city, a taxi driver leaves his vehicle and dashes toward their position on foot, but is shot by an Iraqi soldier before he can reach them.

In Samah, a man who is visibly shaken and carrying a blanket and a few other belongings, says there was “bombing everywhere” on his way out from the Qadisiyah neighborhood.

After making quick progress through the villages and towns surrounding Mosul, the Iraqi army says it has slowed down as it reaches the city itself. So far, Iraqi special forces control a few neighborhoods on the eastern side of the city.

They now face a different kind of fight: street-to-street, close quarters combat where the enemy can appear from any house, and where civilians are trapped in between.

The UN's Office for the Coordination of Humanitarian Affairs, International Organization for Migration and other agencies

There are an estimated 1.5 million people still in the city, which is the largest under ISIS control. The United Nations says more than 60,000 people have been displaced since the start of the Mosul offensive on Oct. 17, and aid agencies are preparing for that number to rise to 700,000.

Iraq's military says it has slowed its offensive to protect civilians in the city, but that has not stopped them from coming into harm’s way. The UN warned this week that there's been an increase in civilian casualties coming from Mosul, and that medical facilities may become overwhelmed.

Iraqi special forces head to the front line in Mosul.

"Authorities are doing everything they can to help but there isn't sufficient trauma capacity at the field level to deal with the numbers of people being wounded by sharpshooters and snipers and in crossfire. Civilians are being targeted by [ISIS]," Lise Grande, the UN humanitarian coordinator for Iraq, told Reuters.

Independent monitoring group Airwars says reported civilian casualties from airstrikes, which are being carried out by a US-led coalition founded to fight ISIS, have been “relatively low,” so far, but they expect the number to grow as more of the combat becomes focused within Mosul's city limits.

Read more: ISIS jailed and beat up this Iraqi barber for giving the wrong haircut

At a field hospital in Samah, army medics receive civilians every day with injuries from the fighting — most of which, the medics say, are caused by ISIS.

“We are seeing all kinds of injuries: amputations, beatings, chest, arm and leg injuries,” says Khalil Jawad Kazem, a medic with the Iraqi army’s anti-terror unit.

“ISIS are targeting civilians with their bombings and shelling.”

Kazem says the coalition is holding back its airstrikes to protect civilians, and that he has seen very few injuries caused by them.

“If they had a target with no civilians around, they will bomb it. But not areas where civilians are still around. They fear for the families,” he says.

As he speaks, families continue to trickle in from the front line a few neighborhoods over. In one group, a terrified child clings to his mother’s arm.

Richard Hall reported from the Samah neighborhood of Mosul, Iraq.