Mansplaining. By now you've probably had it 'splained to you. But just in case, here's Swedish gender expert Christina Knight on the subject:

"I think often it's experienced as a sort of condescending exercise whereby the woman feels that the man feels a need to explain in perhaps a patronizing or condescending way, where the woman hasn't actually asked to be informed, and perhaps the woman might already be more knowledgeable or more well informed on the subject." 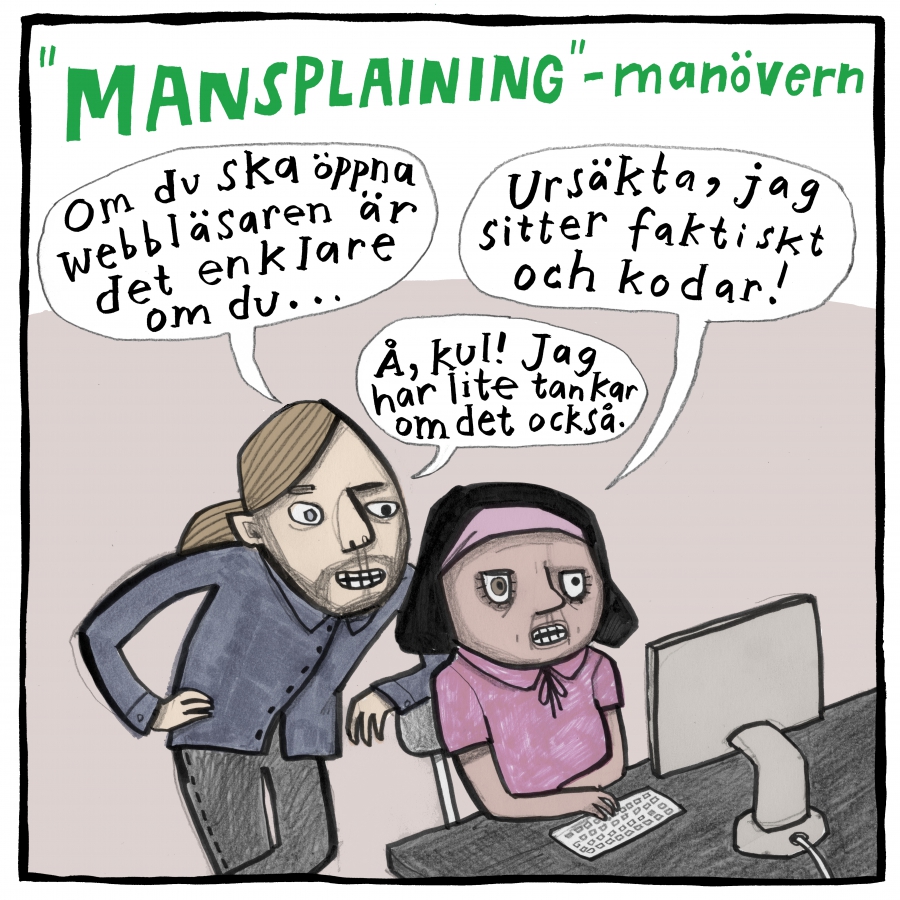 Man: If you're going to open the browser, it's easier if you…

Man: Oh, how fun! I have some thoughts about that too.

In other words, it's when a man a) assumes a woman knows nothing b) over-explains something obvious or not even worthy of explanation, and/or c) likes the sound of his own voice. 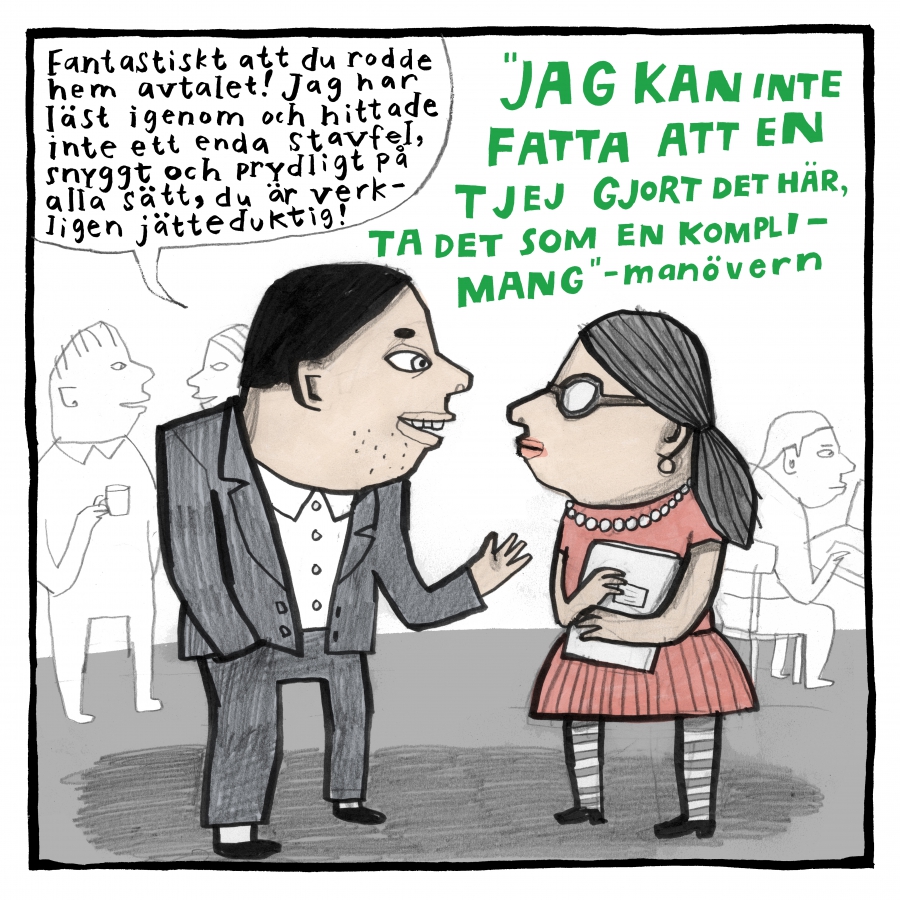 Man: It's so amazing the way you nailed that contract! I've read through the whole thing and I didn't find a single typo! Nice and neat in every way, you should be proud.

If you're a Swedish woman, and believe you've been mansplained, for this week only you can call a mansplaining hotline to vent. This is no joke. One of Sweden's largest trade unions, Unionen, set up the hotline after hearing one too many mansplaining complaints from its members.

Sweden's largest trade union, Unionen, is sponsoring the mansplaining hotline, which will be open for one week.

Knight, who consults with Swedish companies to make them more diverse and gender-equal, is one of the operators taking calls. "The calls have come in from all over Sweden and I've had pretty much 50-50 men and women calling in, which is interesting and good."

She says the people range from those who want simply to applaud the initiative to those looking for actual strategies for responding to a mansplainer. 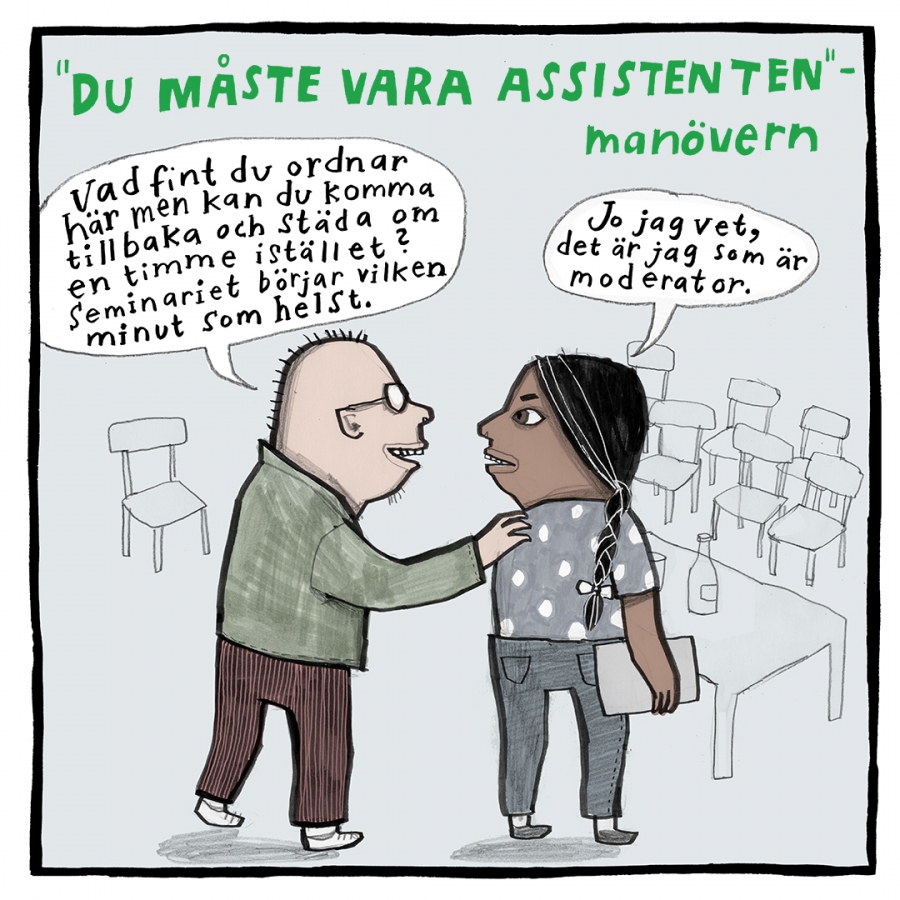 Man: I appreciate that you're keeping it neat in here, but could you come back and finish cleaning in an hour? The seminar's about to start any minute now.

Woman: I know, I'm the moderator.

Knight says, "I had one wonderful call from a man in his thirties." He told Knight that his sister had asked him to talk to her sons, ages 13 and 10, about mansplaining. "I thought that was such a great thing to do, and not least for the man to take on this responsibility." He wanted tips and advice from the hotline on what to say to his nephews so they wouldn't grow up to be mansplainers. 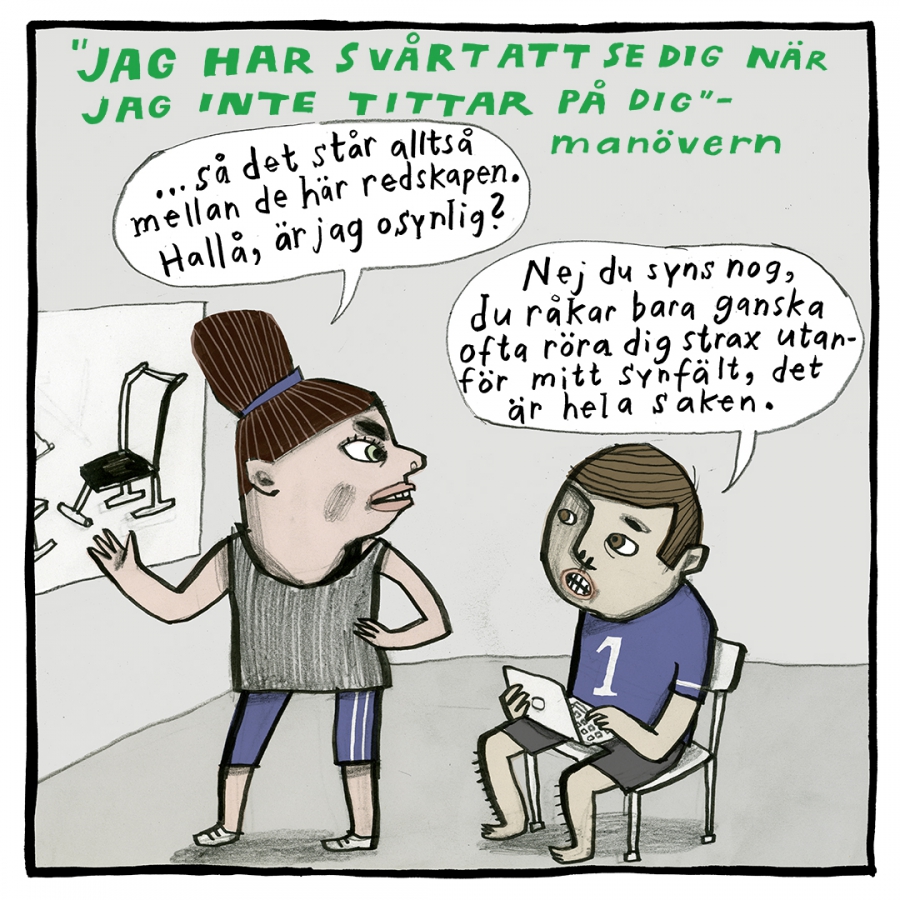 Woman: We have to decide between these machines. Hello, am I invisible or something?

Man. No, you're visible all right. It's just that you often move outside my line of vision.

Remarkably, Knight says she personally hasn't received any calls from disgruntled Swedish men — but she knows there has been some backlash. "There's been quite an intense debate in social media and I know that was expected from Unionen. It is always the case when you discuss gender equality." She says men sometimes interpret the subject of gender equality as an attack on them, "which is such a shame because I know the aim of this campaign and the aim of most sensible discussions on this topic actually aim to improve situations for both men and women."

Knight says the goal of the campaign benefits all by trying to improve the climate in the workplace and make sure everyone is being listened to and respected. 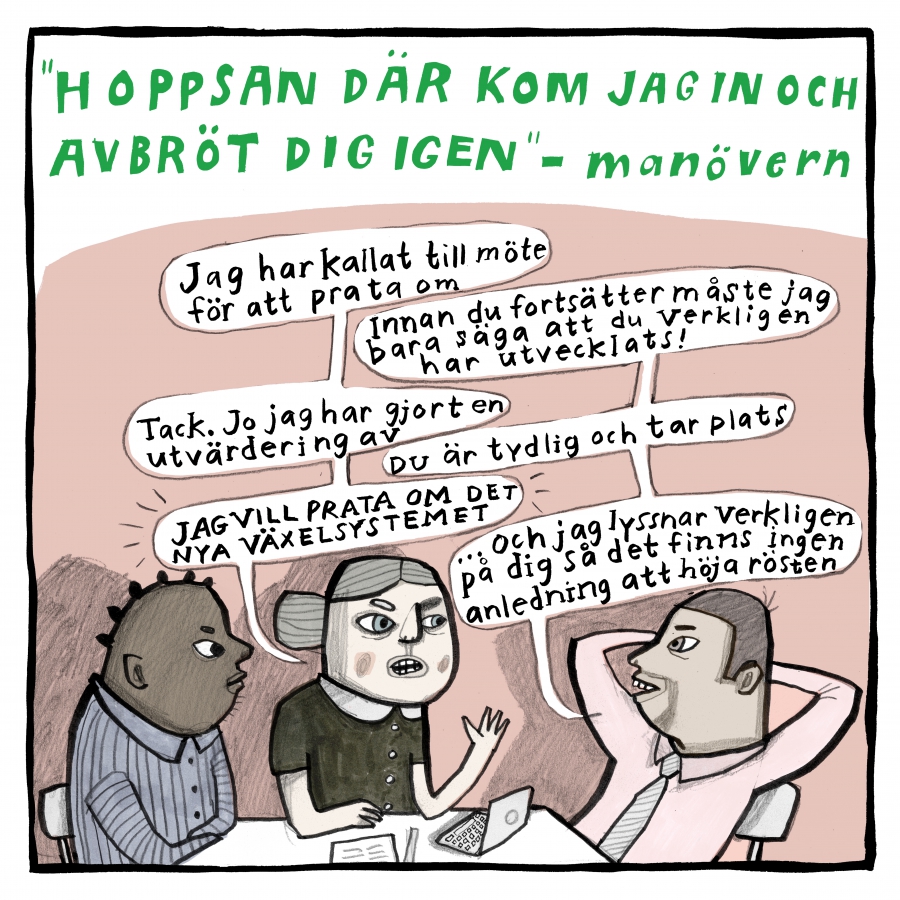 Woman: I've called you all to this meeting to talk about…

Man: Before you continue I have to say that you've grown so much!

Woman: Thank you. Anyway, I've made an evaluation…

Man: You're intelligible and not afraid to claim your space.

Woman: I WANT TO TALK ABOUT THE NEW SWITCH SYSTEM!

Man: And I'm listening to you, so no need to raise your voice.

To an outsider, what's curious about a mansplaining hotline in Sweden is that the country is already on the feminist forefront. Prime Minister Stefan Lofven declared Sweden the world's "first feminist government" when the Social Democrats returned to power in 2014. The country has a minister for children, the elderly, and gender equality. It's instituted gender-responsive budgeting, gender equality in health matters, and an action plan for a feminist foreign policy. Stockholm even has a gender-equal snow-plowing policy.

Knight acknowledges Sweden's way ahead on the gender equality front, but says the concern with mansplaining came from Swedes themselves. 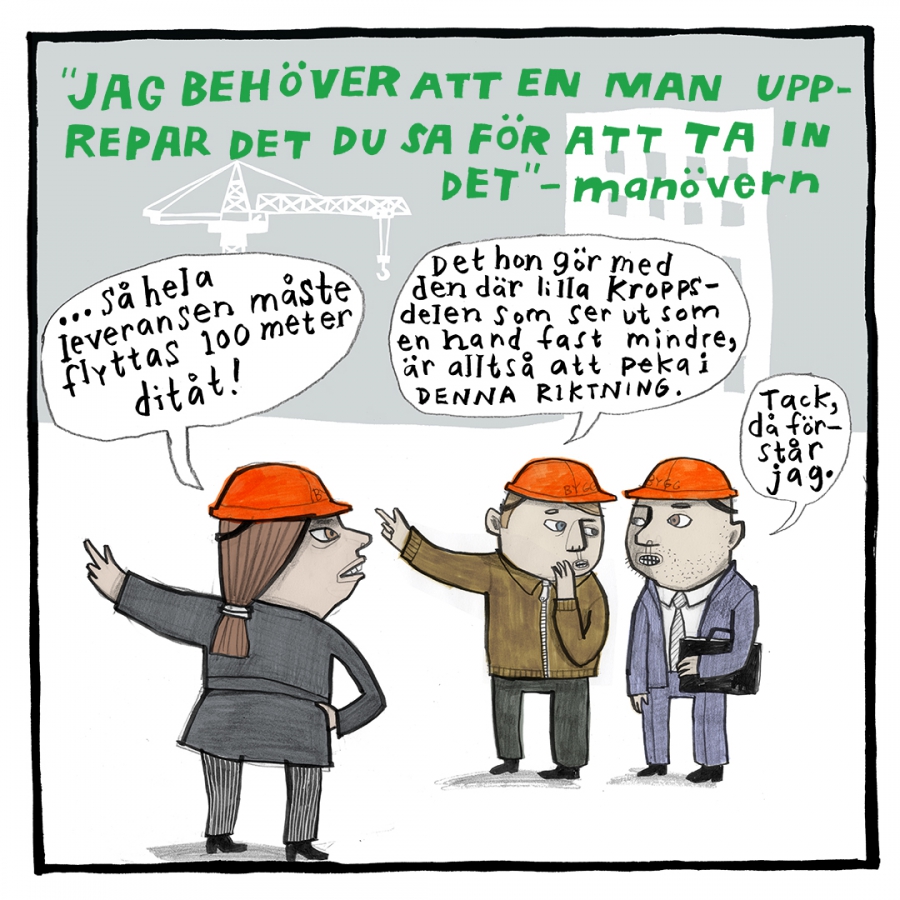 Woman: This whole delivery needs to be moved 100 meters in that direction.

Man 1: That thing she's doing with that little body part that looks like a hand but much smaller is POINTING IN THAT DIRECTION.

Man 2: Thank you. Now I understand.

"This specific campaign really is inspired by a need, expressed both by members within Unionen and women generally," Knight says. "They say that they have experienced this and it is troublesome and it is something they'd like to learn how to handle and make people who are mansplaining aware of what they are doing." 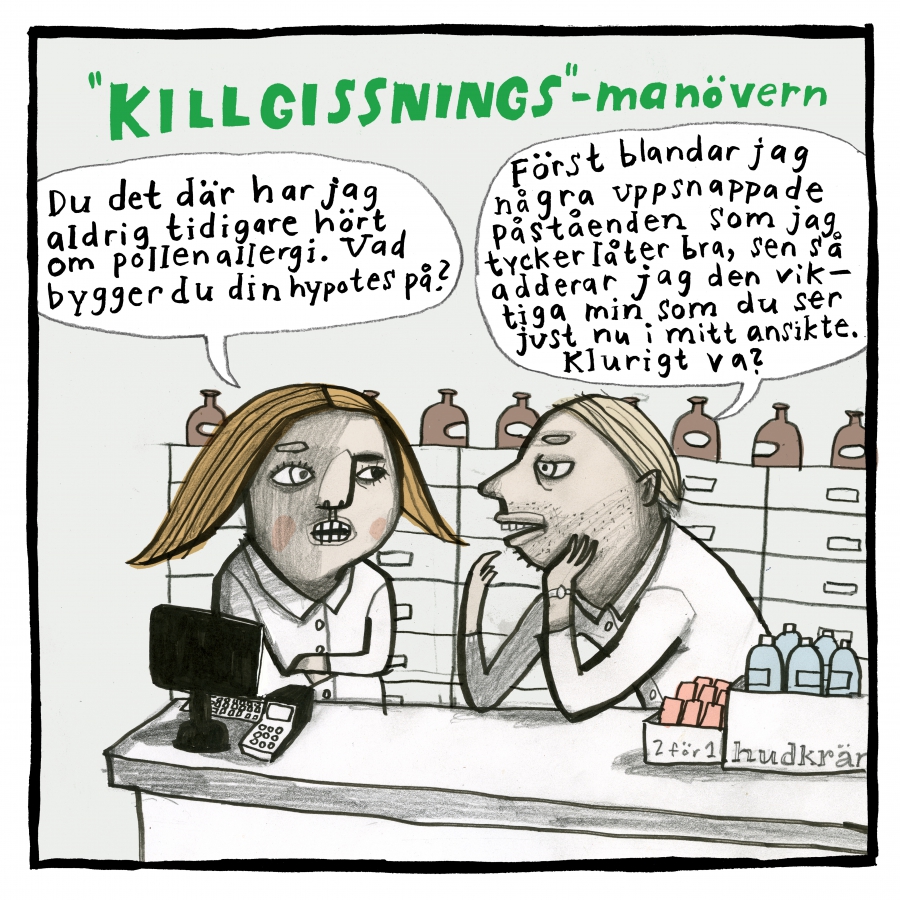 Woman: Hmm, I never heard that about allergies. How do you support your thesis?

Man: Well, first I throw in some casual statements that I think sound legit. Then I add this very important, serious facial expression that I have on right now. Pretty tricky, huh?

So how do you deal with a mansplainer? "I think it's important to talk to the person who's exposing you to this and say 'You know something, I'm experiencing now that you're talking down to me or telling me something that I actually really know quite a lot about and I'd appreciate next time if you perhaps would start our conversation by asking me whether I'd like to know more, if I need to know more, or if I already know what I need to know.'" 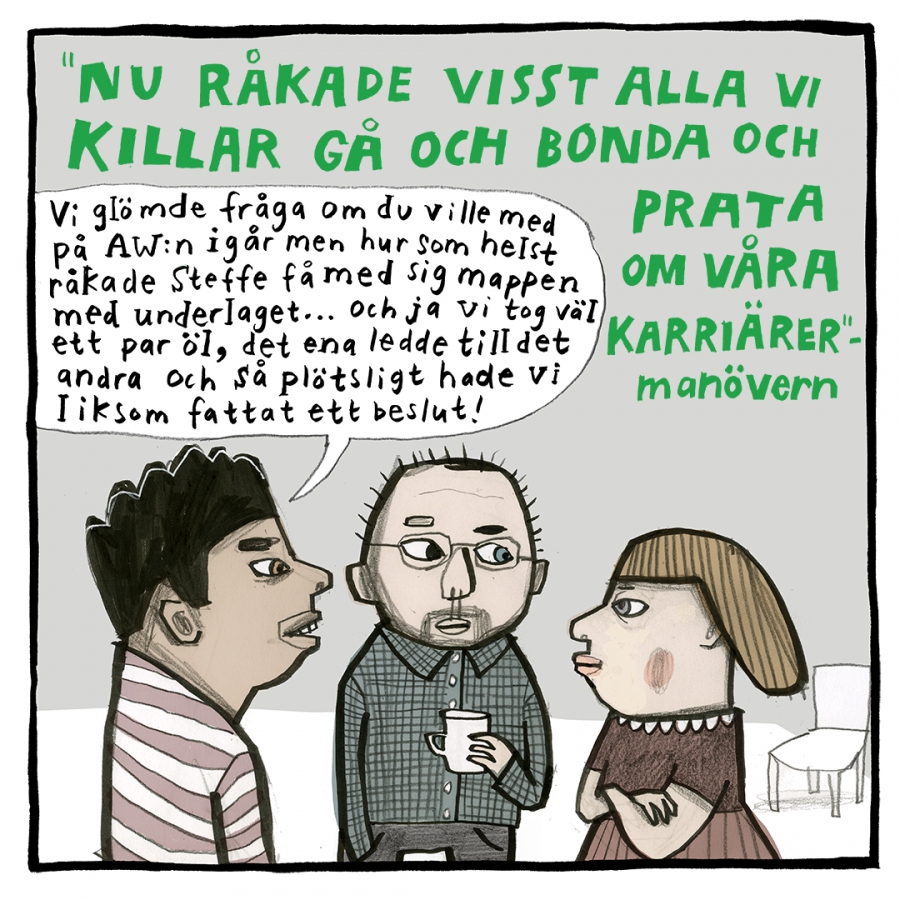 Man: We forgot to invite you yesterday after work. Anyway, Steffe accidentally brought the file with the strategic documents and well, we drank a couple of beers, one thing lead to another, and all of a sudden we had made a decision.