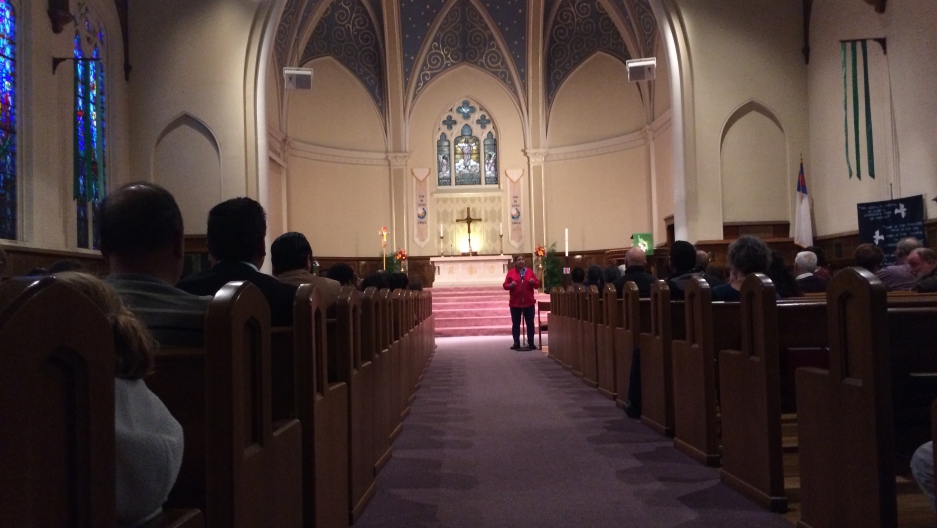 A member of the Milwaukee immigrant community expresses her fears of a Trump presidency at a community forum this past weekend. Many gathered here are afraid of deportation. Milwaukee’s population is about 7 percent foreign-born.

On Sunday afternoon, about 150 immigrants and immigrant allies gathered in the Ascension Lutheran Church in Milwaukee. The forum, organized by the city’s largest immigrant advocacy group, was part community therapy, part action planning.

A middle-aged man with dark hair, wearing a royal blue windbreaker, took the microphone: “It wasn’t our hope, but it’s the reality. We have Trump elected,” he said in Spanish. Real-time translation was provided to non-Spanish speakers via radio headsets. “But we have Democrats in Congress, they’re not going to let him do whatever he wants. Be calm.”

Those gathered in the church have had some practice opposing Trump-style immigration policies. Since 2002, Milwuakee County’s sheriff's office has been led by David Clarke Jr., whose blunt rhetorical style has drawn comparisons to the president-elect, as have his tough-on-crime, anti-immigrant messages. 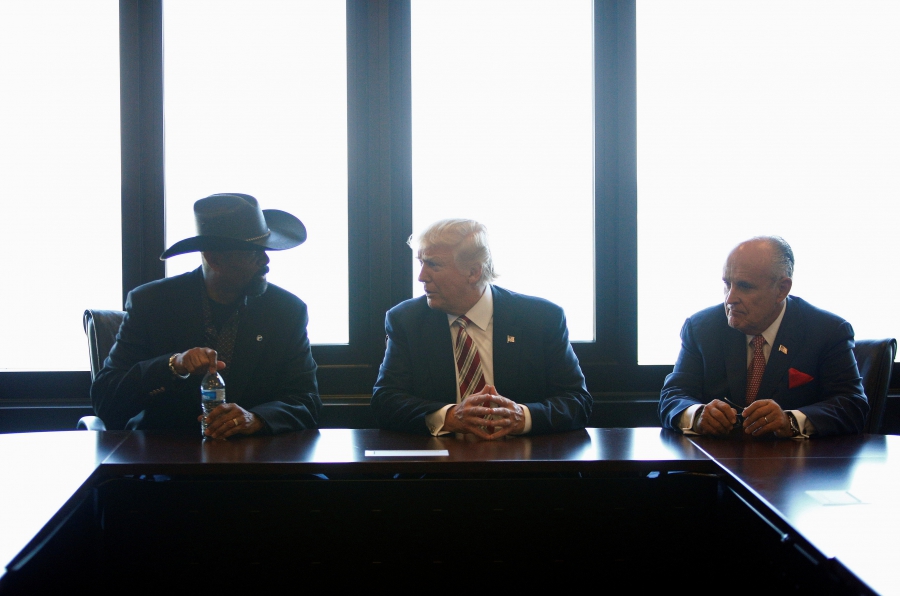 Now president-elect Donald Trump talks with Milwaukee County Sheriff David Clarke Jr., on the left, and former New York mayor Rudy Giuliani, on the right, at the Milwaukee County War Memorial Center during the campaign on August 16, 2016. Both Clarke and Giuliani are now on Trump’s shortlist to become secretary of the Department of Homeland Security.

Clarke is on the shortlist to become Trump's secretary of homeland security, overseeing border security and immigration enforcement. He is listed as a contender alongside Arizona Sheriff Joe Arpaio who recently lost his position and is facing criminal charges for racial profiling. Former New York Mayor Rudy Giuliani, Texas Rep. Michael McCaul and Alabama Sen. Jeff Sessions are also said to be on the list.

Update: Clarke told a local radio show on May 17 that he is accepting a position as a deputy secretary in the Department of Homeland Security. The agency has not confirmed his remarks.

Clarke's supporters see his brazen style is one of his greatest assets: He doesn’t let politeness get in the way of doing what he thinks is best.

“Sheriff Clarke isn't a typical career bureaucrat who wants to grease the cogs of a broken machine so they creak less loudly — and he's intolerant of inefficiency just to keep the politics peaceful,” popular Wisconsin conservative talk radio host Vicki McKenna wrote in an email. “He's sharp, fearless and authentic and voters of all political stripes, all incomes and all walks of life respond to that. Democrats and Republicans know that he'll put their safety and the Constitution first.”

But for Christine Neumann-Ortiz, executive director of Voces de la Frontera which organized the church event, putting Clarke in this position would be “very dangerous.” “He’s very cavalier, he has no respect for the law as it applies to due process, or civil rights. And he has no understanding of the nuances of immigration law.”

This past March, Clarke told Fox News that protesters who rallied in opposition to Trump’s anti-immigrant messaging were “anarchists” and “misfits” who “only understand one thing — and it’s force.”

Clarke has called Planned Parenthood “Planned Genocide,” higher education a “racketeering ring,” and the Black Lives Matter movement “Black Lies Matter.” In October 2015, he posted on Twitter without evidence: "Before long, Black Lies Matter will join forces with ISIS to bring down our legal constituted republic. You heard it first here." (Clarke did not respond to an interview request.)

“Sheriff Clarke is a passionate and vocal defender of police officers, at a time when our job is more difficult and dangerous than ever before,” Lynch said. “That is exactly what the PBA does for New York City police officers, so it has been encouraging to hear Sheriff Clarke make the same case on a national stage. We should be hearing that type of support from elected leaders in both parties and at all levels of government.”

Voces de la Frontera’s battle with Clarke started in 2012, when the Milwaukee County Board decided not to participate in a federal program to engage local law enforcoment in identifying deportable undocumented immigrants. Secure Communities, now defunct, was designed by the Department of Homeland Security and required police to check fingerprints against immigration databases. If there was a “hit,” local authorities would notify Immigration and Customs Enforcement (ICE) and detain the individual until he or she could be handed over.

Critics said that the program streamlined the deportation of people who posed no threat to the community, caused arbitrary, lengthy stays in jail and deteriorated community-police relations by encouraging racial profiling, and by making officers de facto immigration agents.

Milwaukee joined hundreds of other communities across the country in rejecting most of the Secure Communities program. County officials decided it would only detain arrestees for ICE in cases of serious crimes or those with criminal histories of domestic violence, driving under the influence or gang participation. Clarke, though, chose to view the county ordinance as symbolic — which is to say, he ignored it.

“I was surprised that there wasn’t a political structure of accountability, that the sheriff could just completely disregard a policy by county elected officials,” says Neumann-Ortiz. “It revealed to me the need for greater accountability.”

So when President Barack Obama officially ended the Secure Communities program in 2014, Neumann-Ortiz and her organization wanted to be sure that Clarke was no longer participating. Last year, Voces de la Frontera filed an open records request for copies of forms ICE submit to Clarke’s department to detain people on their behalf. Clarke first refused. When a judge ordered that he comply, Clarke handed over heavily redacted files.

The suit for underacted files is currently before the State Supreme Court. Neumann-Ortiz says she expects a resolution in the next month or two.

But back at the church, Trump's rhetoric has reignited fears about the effects and side-effects of an aggressive deportation agenda that could be implemented nationally. One man said that his four-year-old daughter didn’t want to go to school this week because she was afraid Trump was going to come to her classroom and deport her. A woman asked the audience broadly what she should do if she was pulled over for being Mexican. Another worried that racists would rise from the woodworks, now emboldened and unified under our president-to-be.

“A family will call me, say someone is being detained and believe they have an immigration hold,” says Marc Christopher, an immigration attorney in Milwaukee. “I'll go meet with them and I'll say, ‘OK, what are you being held on?’ And it might be a drunk driving first offense, which is a civil forfeiture, which is not even criminal. Then I'll ask them how long have you been here?”

Often, Christopher says, the answer will be longer than two days, the limit for a local law enforcement agency to hold someone on behalf of ICE which is spelled out in the form itself. Anecdotally, he thinks that the problem has improved over the past year because of increased attention by the immigration advocates, but the actual rates of compliance cannot be known until Clarke produces records of detention.

The prospect of Clarke in a position of federal authority is concerning to Christopher: “In Milwaukee County he has shown a lack of concern for the basic civil rights of immigrants.”

McKenna, the talk show host, welcomes the prospect of Clarke in a federal position. “He always puts the Constitution first and his brain is always five steps ahead of the average politician, bureaucrat or typical law enforcement professional,” she says.

The County of Milwaukee went overwhelmingly to Hillary Clinton, about 65 percent of votes according to unofficial results. Clarke was first elected sheriff in 2002 as a Democrat. This year, though, he spoke at the Republican National Convention. If he does not join the Trump administration, he’s up for re-election to a fifth term as sheriff in 2018.