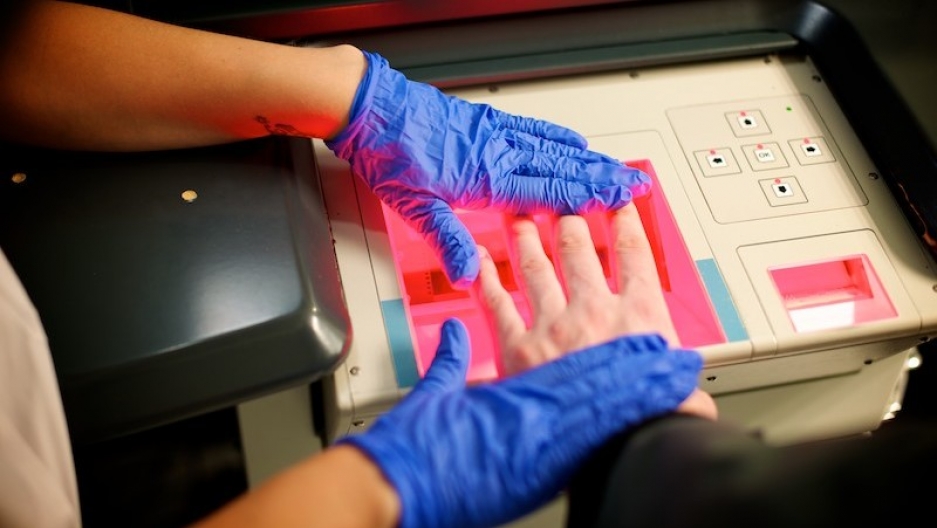 A detention officer scans the prints of a suspect in custody. Researchers hope that a new 3-D printed glove can help fingerprint readers be tested with greater accuracy.

The latest wearable tech to get people talking isn’t an activity tracker or a watch. It’s a glove that gives the wearer an entirely new set of fingerprints, fooling even the best fingerprint scanners on the market.

The glove sounds straight out of a spy movie, but it’s actually a recent project from Michigan State University. Researchers there designed it to help developers test "biometric systems" (like the fingerprint scanners at airports and police stations) in a more accurate, standardized way. But even the glove’s creators worry that the technology could double as a tool for criminals.

First, the upside: vendors often test scanners using flat images of fingerprints, a method which the researchers write is “not adequate to simulate how users interact with the reader during the fingerprint capture process.” Using computer-designed fingerprints, the 3-D printed glove can improve upon 2-D representations by helping vendors better test variables like finger placement and pressure.

As a result, the glove makes “repeatable, consistent tests” possible across various scanners, according to Ananya Bhattacharya, an editorial fellow at Quartz who has written about the new wearable.

“So it's all the same. It's not different people trying out the same machine multiple times, because that can sort of throw the calibration off a little bit,” Bhattacharya says. “And the other thing is, that, you're going to have this one hand that possibly is not using actual biometric data. You could have fingerprints, but they wouldn't match up to someone else, so if it gets stolen or is used it's not actually a problem.”

The glove is 3-D printed using proprietary materials that can mimic real skin, including the texture of our fingerprints. “The ridges actually form really well when you 3-D print this,” she says, noting that when the glove is scanned, the ridges “splay out” just like skin does.

But what’s keeping this new glove — literally — out of the hands of criminals? For starters, Bhattacharya says, these machines are expensive. In fact, the researchers printed their glove on a 3-D printer that costs $250,000, according to Bhattacharya. And when they tried printing the same design using a $1,000 machine, the glove didn’t work with scanners.

But in the long term, Bhattacharya says, researchers want scanners to be able to differentiate between a human hand and a printed model, meaning that only real human fingerprints would work with the scanner in daily use. This “anti-spoofing” technology, which doesn’t yet exist, could be turned off when the scanner is being tested with a fingerprint glove. To spur development of the technology, the glove’s creators are sharing their work with other vendors and researchers.

“The researchers have actually shared [their findings] with other companies and scientists, because they're trying to tell them that ‘Hey look, if someone gets biometric data and they get this machine, they can print out your fingerprints.’”

Bhattacharya notes that as of yet, the researchers themselves haven’t made progress on the antifraud technology. But they are working on ways to make the glove easier for (legitimate) future wearers to access. For example, they’re developing a 3-D printed mold for the glove, so that it could be made with silicone and other cheap materials, and not necessarily need an expensive printer.

“So, if someone gets their hand in the mold and then they pour in silicone, they could make their copy for much less than $250,000 every time,” she says. “And that's why [researchers] are putting this out there, to quickly start coming up with countermeasures.”