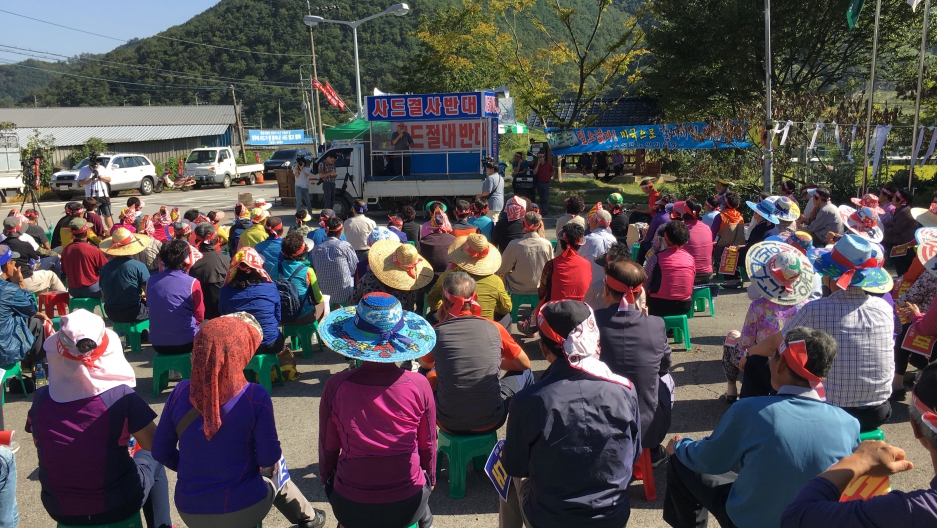 Seated protestors listen to a speech opposing a new American anti-missile defense system being located in their area. They're worried about potential health impacts.

Out of the windows of a new apartment complex in Gimcheon hang red banners reading “No to THAAD.”

The city, 120 miles south of Seoul, is down a country road from a golf course that’s slated to become home to the US military’s newest defense against North Korea’s missiles.

The Terminal High-Altitude Area Defense system is designed to shoot down rockets — using rockets — in midair. Reports suggest a mixed track record on THAAD's accuracy, but for residents living near the deployment site, their biggest concerns about the defense system are potential health risks.

Lim Sang-hwan, who has an anti-THAAD banner across the front of his cellphone shop, says he thinks up to 90 percent of his neighbors are worried that the system's high-powered radar will pose a hazard.

“It’s being deployed too close to where families live,” he says. “I have a 4-year-old son and I don’t want him harmed.”

“A lot of people argue about it,” he says. “I don’t talk about the missiles unless my passenger brings it up. I don’t want any problems.”

Shin says he personally supports the new defense system and doesn’t believe speculation about the potential effects of the radar emissions.

Anger over the THAAD deployment, which is expected to take place by the end of 2017, has focused on officials in Seoul. Locals say they feel they were left out of the decision-making process and their concerns have not been addressed.

A Terminal High-Altitude Area Defense interceptor is launched during a successful test.

US Department of Defense, Missile Defense Agency/Handout via Reuters

Both the US and South Korean militaries have tried to calm local concerns. They've said the THAAD system's radar emissions meet safety standards and there won’t be any adverse effect on the surrounding communities.

Still, local farmers don’t want their produce to be known as THAAD grapes or plums, according to Kim Hee-soo. The 45-year-old supermarket manager has joined recent demonstrations against the missile shield system, which so far have been peaceful.

“If these missiles are brought to the area, I expect the protesters might turn aggressive,” she says.

Just a mile away from the golf course, in the parking lot of a rural community center, 58-year-old melon farmer Lee Jeong-hee is getting ready to address fellow residents during what’s become a routine demonstration.

“I really think this missile deployment is going to make South Koreans angry at the American military here,” says Lee, whose brown, wide-brimmed hat is adorned with a red ribbon that says in Korean, “Totally Against THAAD.”

Lee warns that violence could erupt throughout South Korea and some American facilities could become targets.

But Kim Won-myeong, a monk at a nearby Buddhist temple, doesn’t think that will happen. He says locals in this very conservative part of Korea still feel positive about American forces in their country.

“I don’t think anyone here is really angry at the US because of the missiles. America is our ally,” says the monk, who is a member of the Won Buddhist sect. But he does think that Washington is pressuring Korea to deploy the anti-missile shield. “It’s hard for Korea to say no because we are the weaker partner in this relationship.”

Back at the community center, about 100 mostly elderly residents are sitting on plastic stools, listening to protest leader Lee Jeong-hee.

“If these missiles are brought here, we are going to physically block the road to the base,” he says before joining the rally. “If there are any fights between protesters and the authorities, the US is to blame.”