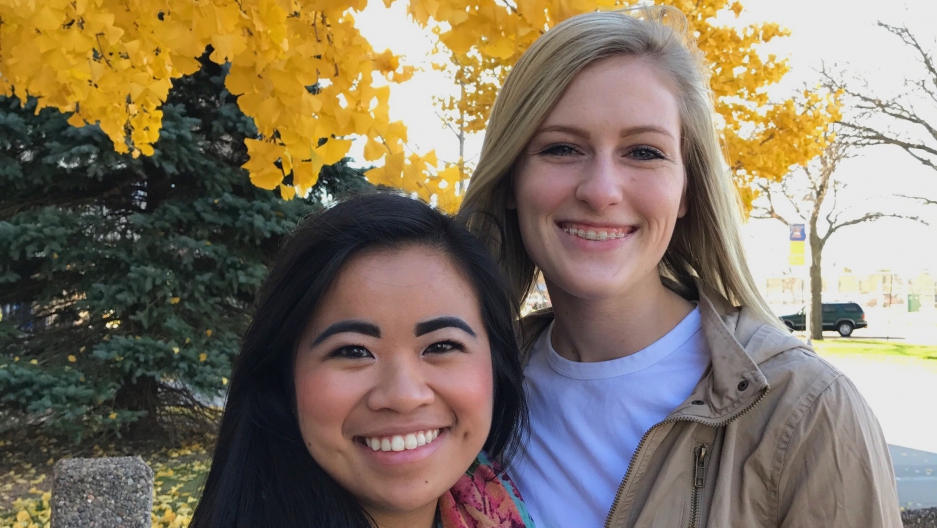 Thu MacKenzie and Madison Bau are freshmen at the University of Wisconsin, Eau Claire.

Thu McKenzie and Madison Bau are college buddies. The two freshmen at the University of Wisconsin, Eau Claire, live just floors apart in the same dorm.

And although they don't see eye to eye on politics, that never seemed to get in the way until Donald Trump held a rally on campus last week.

The evening of that event, McKenzie — who was born in Vietnam — couldn't avoid walking through a line of Trump supporters as she returned home from class.

"I could feel them staring at me. Then a couple of them, as I tried to cut through the line, yelled to 'go back to where I came from,' or that I was 'sapping off the government' and that, I should be grateful," she recalls, noting one even more painful slur. "It was 'Ching Chong Asians for Trump!' And then they followed up after I didn't acknowledge them, with, 'Do you even speak English?'"

McKenzie has lived in the US for 18 years. She was born in Vietnam and was adopted when she was three months old. She's a biochemistry major, as is her lab partner, Madison Bau. And although Bau was among those cheering at the Trump rally, McKenzie texted her after the incident.

McKenzie messaged that "'Some things happened last night that were really upsetting, and I just really need some time,'" Bau remembers.

"It just totally broke my heart that something like that would have happened to her," Bau says. "She is one of the sweetest, most compassionate people that I know. And the fact that someone could just say that shows how downhill, I guess, people are starting to go."

But Bau says the incident hasn't caused her to rethink her support for Trump. She says many of his inflammatory statements have been "taken out of context," although she deplores what happened to her friend.

"That was one of [Trump's] supporters. That doesn't necessarily mean every supporter is like that or he is like that," she says. "To me, it's just like, if you're racist, you're racist. You're not going to just change because of a presidential candidate."

McKenzie, who is pulling for Hillary Clinton, says almost all of her close friends attended last week's Trump rally on the Eau Claire campus. And that made her uneasy. When she returned to her dorm room after the taunts, she sought out the only other person of color on her floor.

"We both felt pretty fearful. So, we went to the cafeteria together to eat dinner, just to have that company. And the atmosphere in the cafeteria — the rally had just been getting out, and it was very frenetic — I was pretty scared there also."

McKenzie had two tests to study for, but she wasn't able to concentrate. So, she wrote a Facebook post about the incident.

The post was shared more than 2,000 times. She says she worries that it might have been used to further polarize debate.

"There were some people that claimed I made it up, and that I was lying. And someone even searched me on Twitter and YouTube, and they said, 'Well, Thu doesn't seem like she's politically motivated.' And I'm not. I'm just an 18-year-old college student, and I'm sort of the 'mom' in my friend group. I like to fix everything, and I like to make it better. And I couldn't fix it."

Bau hopes to stand by both her friend and her preferred candidate. She says she was sad that when McKenzie made her post, her pal didn't feel like she could talk to her first.

"Just because I'm a Trump supporter, I still don't think that [taunts] are right," Bau says.

Both young women vow to continue to be friends. They think their generation has the potential to bridge deep political divides.

"If I had been by her when that incident happened, I definitely would  have said something," Bau notes. "If people are educated, they're not going to make uneducated comments like that. But then people really have to want to be educated."