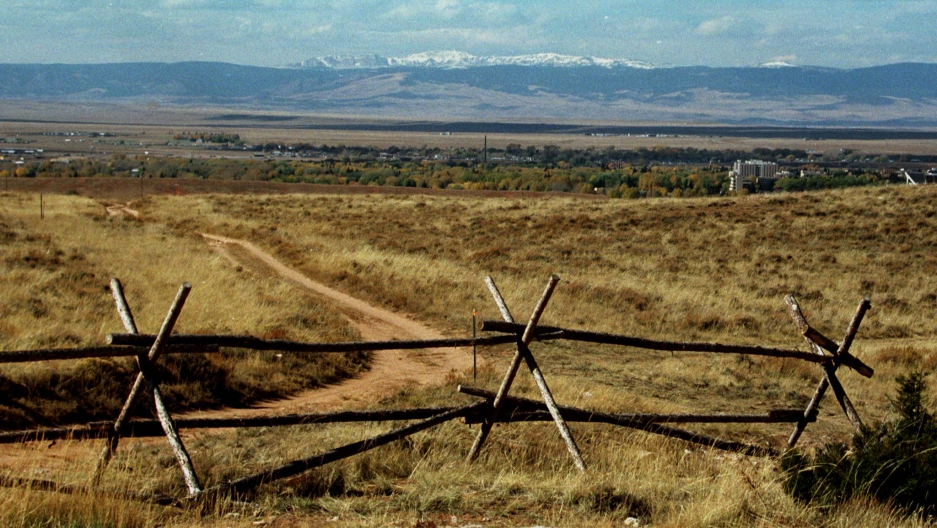 A two-tracked dirt and stone road wends its way through rocky terrain to an isolated hilltop location looking over Laramie, Wyoming.

Bonnie Foster is an activist, a Republican and the state director of Donald Trump’s Wyoming campaign.

She lives in Casper, a city in the middle of The Cowboy State. It’s an area that the American Communities Project classifies as "Rural Middle America." The project has charted every county in the United States based on its demographics and in advance of the elections, we’ve been talking with voters in each community type to get a sense of the issues facing the country.

There are 21.5 million people in Rural Middle America, living in 599 counties stretching from Maine, through the Great Lakes, and deep into Montana and Washington state.

And though Foster calls Casper her home now, she’d never even visited before she met her second husband, Bill.

“I was born and raised in northeast Montana, just 14 miles south of the Canadian border, and lived there until I was 24,” Foster says. “He was working for an oil and gas company and they were drilling in what's called the Williston Basin. My [preschool-age] son fell in love with Bill, and so we got married.”

Bill Foster lived in Casper, so Foster moved there in 1980 and has lived there most of the time since.

“Except for 3.5 years that we spent in the Dallas metro area when he got transferred with his company,” Foster says. “They sold their northern properties, laid him off and we opted to move back to Casper. He started his own oil and gas consulting firm.”

Bill Foster’s business was part of an energy sector that is active in parts of Rural Middle America, like Wyoming. In 2014, the US Department of Agriculture reported a rapid growth in oil and gas extraction in “the nation’s midsection,” which led to modest population growth and substantial job growth.

However, Wyoming has seen energy prices slump and massive layoffs this year. Foster attributes all of this to the normal ebb and flow of oil and gas revenue in recent years, with one exceptional factor.

“What is different this time is it's affected coal,” she explains. “With all the rules and regulations that have come down from the Obama administration on coal, we have had over 600 coal mining jobs that have been lost — 600 jobs in three counties is quite a bit if you take that times the people [living in the area].”

“Coal is going to be very much affected by who the next president is,” she adds.

To compensate for economic shifts like this, many areas of Rural Middle America are seeking to diversify their economies by bringing in new industries. In this respect, Casper has been lucky.

“The demand for people to work at the correction facilities, like the prisons, has increased,” says Foster. In this way, Casper is benefitting from a trend of increasing incarceration rates in Middle America.

She’s also excited that the medical industry has been coming to Casper.

“We have only one of two trauma centers in the state,” she says.

On average, rural areas have about 68 primary care doctors per 100,000 people, compared with 84 in urban centers.

Many of the issues in Rural Middle America are caused and compounded by socio-economic conditions. The American Communities Project has found that Rural Middle America is slightly wealthier than average, with a median income of $47,000. But Foster strongly believes that the biggest issue facing Casper is the economy.

“We have been noticing more and more houses popping up on the market for sale,” she says. “I've watched these all my years at Casper. When it comes time to change the president, car dealerships slow down, lots of people slown down — a couple businesses have closed. Part of that's due to poor management. A lot of people are cutting back and hanging on.”

Communities in Rural Middle America historically lean to the right politically. Republican nominee Mitt Romney won these counties by about 12 percentage points in 2012. Many Americans, especially in rural and blue-collar areas, are pessimistic about the country’s future. And Foster argues that voting is the best insurance for the future.

“Your vote, your voice,” she says. “This is probably the most historical election that has been in my time, and I've been voting every two years for 42 years. We need help getting our country back on track.”