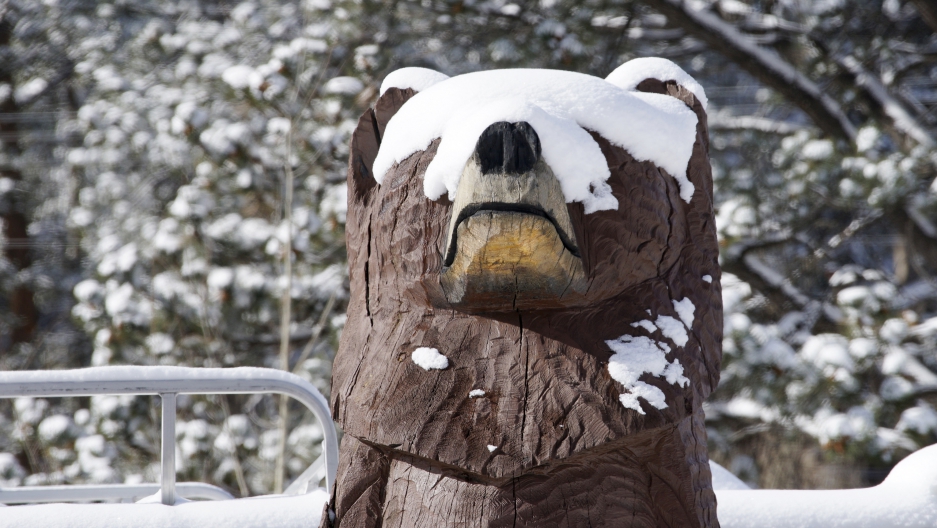 The face of a carved wooden bear is seen covered with snow after a storm moved through Golden, Colorado, November 13, 2014. Golden is in Jefferson County.

The town of Edgewater, in Colorado’s Jefferson County, is known as a “tree-city.”

Driving through the small town just west of Denver, you’ll see 1950s style ranch homes and “a bunch of big, old, leafy trees,” according to long-term resident Emmy Babcock. But the area is undergoing a huge change.

Jefferson County is classified by the American Communities Project (ACP) as an “Exurb” — places that exist on the fringes of large metro areas in the space between suburban and rural America. About 32 million Americans live in the Exburbs —  it’s just one of 15 different ACP county types we’ve been profiling in the lead up to the 2016 election.

Jefferson County is home to more than 300,000 residents, according to 2015 stats from the US Census Bureau. And the population continues to boom as more young professionals flock to the area.

“The Denver area is experiencing just massive growth right now,” says Babcock, who works in recreation management. According to the Census Bureau, the Denver area grew by more than 18,000 residents.

“The growth is the biggest problem, and other things are just symptoms,” she says. “Homelessness is a huge problem in the Denver area.”

“I used to work for the Salvation Army Intermountain Division ... and we worked a lot with homelessness,” she says. “But due to the growth, we were experiencing trouble keeping places for shelters and being able to afford that real estate.”

Rents in the Denver area jumped 8.3 percent from 2014 to 2015, according to the Denver Post, and the average cost of a one bedroom apartment is now about $1,030 per month. As the city of Denver becomes less and less affordable, more residents are turning to places like the Exburbs, and Jefferson County in particular.

In the meantime, Babcock says she has seen people “demonizing” the homeless community. Over the summer, some members of the area’s homeless community filed a 36-page lawsuit “claiming the city systematically forced the homeless out of the downtown area, illegally taken and destroyed their possessions, and violated their civil rights in an inhumane and vindictive way,” reports the Denver Post. Activists say there are almost 4,000 homeless people in and around Denver, a total that appears to be connected to a lack of housing.

“The Denver mayor, Mayor [Michael] Hancock, is working towards housing solutions,” Babcock says. Hancock announced an ambitious housing strategy in 2015 — the plan would raise over $15 million in the next decade. During the summer of 2016, he also announced plans to invest in condos near metro stations.

But Babcock is still concerned. Even with new housing units, the popularity of Denver and the surrounding areas could mean higher rental prices no matter what.

“I bet that in a few years, [rent] will be similar to New York and San Francisco,” she says.