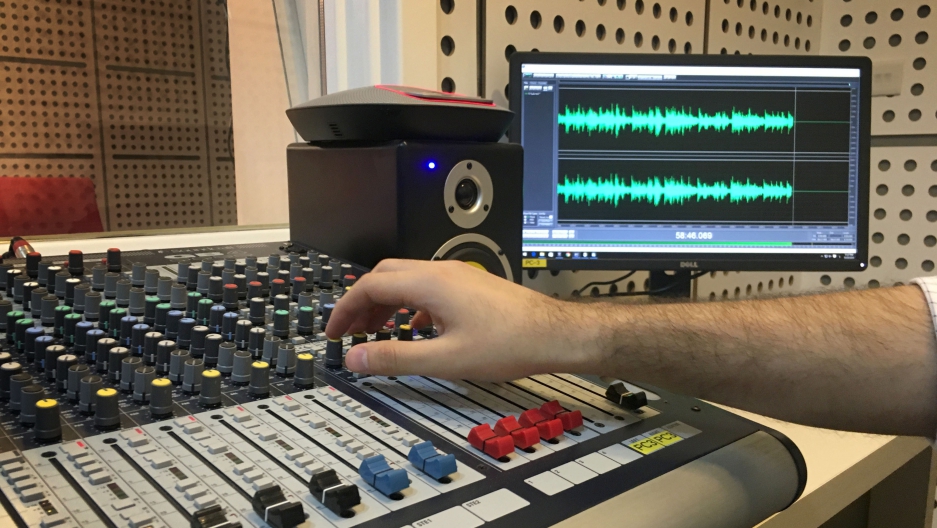 A group of Mosul exiles set up al-Ghad radio station to reach people in their city under ISIS control. The station manager says it's also helping people in the city communicate with one another.

In a secret studio in northern Iraq, a radio host takes a call. The caller is inside the city of Mosul. Over a crackling line, the woman urges the Iraqi government to hurry up and send troops, and she promises people in the city will support the fight against ISIS.

“The women here will rise up even before the men,” she says.

The caller speaks in hushed tones because being caught could mean death. The radio host tells her to be strong.

“The women of Mosul are known for their strength,” the host says to the caller.

As Iraqi forces approach the city limits of Mosul, fears are rising for the hundreds of thousands of civilians stuck inside, under ISIS control. They’ve been cut off from the outside world for years, but this radio station in northern Iraq is defying the militant group, transmitting into Mosul and helping residents get their voices out.

After ISIS took Mosul in June 2014, the militants attempted to isolate the residents. They banned cellphones and the internet — more recently they confiscated satellite dishes and TV transmitters.

In March 2015, a few Mosul exiles set up the al-Ghad radio station, broadcasting to people back home. Al-Ghad means "tomorrow" in Arabic.

“We know how important it is to keep the people posted and to communicate with them,” says Mohammed, the station manager, who doesn’t want to use his last name to protect his relatives still inside the city. “To be able to talk to [them] and to make sure we can deliver their voices.”

Calling from Mosul is difficult and extremely dangerous. ISIS has shut off many cellphone towers so residents have to search for small pockets of coverage or climb to high places to get reception.

“In the past, we used to receive very few calls from Mosul. People were scared to call the radio station,” Mohammed says. “But today people are speaking up. They are talking.”

He says al-Ghad receives around 60 calls per day, 80 percent from inside Mosul. (This is the station's Facebook page.) Several of the callers report that ISIS has staged mass arrests of young men in recent days, probably figuring they will rise up to help Iraqi forces as they enter the city.

A man named Yasser calls in and says he is part of the resistance. In recent months there have been reports of a small but growing underground movement in the city, spray-painting anti-ISIS graffiti and making plans to resist the militants.

“Don’t worry about those who are arrested,” Yasser says to the radio host. “We will free them.”

The radio station is not just giving people a voice and providing information from outside, Mohammed says. It’s also helping them communicate with one another.

“It’s like the 1940s or '50s before the local [phone] lines,” Mohammed says. If something happens in one part of the city, residents in parts may have no idea about it. “People are isolated in the city itself. They don’t have any way of communicating with each other.”

Another woman says she’s calling from the left bank of the city, the eastern side of Mosul. The host asks, “What’s happening there?”

“ISIS fighters are gathering on the streets,” she says. “They are all young, under 30.”

As the militants prepare for the ground offensive by Iraqi forces, Mohammed says he and his team are having their own battle with ISIS for the airwaves.

In response, al-Ghad jammed the frequency of ISIS’s own radio station, and it’s been back and forth ever since. Now al-Ghad has four different frequencies to ensure that it’s always on air, 24 hours a day, and broadcasting into Mosul.

The phone rings again. The caller identifies himself as a member of the Iraqi forces, phoning in from the village where he’s stationed, about 5 miles from the city.

“Stay in your homes,” he advises. “Get lots of water.”

The host follows with more advice for the coming offensive. Stock up on supplies. Put tape on the windows to stop them from shattering with the airstrikes. Stay away from ISIS headquarters. It’s crucial information as Iraqi forces advance closer to Mosul.

“God willing,” the soldier calling in, says, “we will liberate the city soon.”