My grandmother, June Sarracino, used to be teased for how she spoke our ancestral language.

About a decade ago, I returned to the Pueblo of Laguna to spend the summer with my grandmother just like I did before my teen years took over fresh routines.

At the time, I was reconnecting with my roots. Years had passed since I had spent an entire summer on the pueblo. And now that I was doing just that. I wanted to make good use of my time.

Also, there was something else happening back then.  Indigenous languages were disappearing. Tribes started noticing there were fewer fluent speakers in their communities. There was a real push across Indian Country to try and preserve these languages — even among my friends. I grew inspired to do something, too.

I went to tribal linguist Stan Lucero with the idea of doing an oral history project together. He knew my grandmother. They were neighbors for years. He liked my project and agreed to work with me.  And for a month or so, we saw some progress. But when Lucero pitched the idea to the tribal council, they got spooked — by, of all things, a bunch of boy scouts.

"I think what they were afraid of is that scout troop, the Koshares," said Lucero.

Before my recent visit with Lucero, I had never even heard of this group, the Koshares. But for years, this boy scout troop from La Junta, Colorado, had been prominent in Laguna's memory. The troop borrowed the Hopi word Koshare as its tribal namesake — but of course, there's no such thing as a Koshare tribe.

In 1989, the scouts were featured in a PBS documentary.  In the film, you see these mostly white boys dancing around, faces painted, dressed in mimicked feathered and leathered regalia. One of their acts was an interpretation of the Eagle Dance — one of the most sacred dances of the Pueblo Indians.

A lot of people on the pueblo were offended — and understandably so. From this blatant cultural appropriation grew a deep suspicion of anything that could further harm the purity of the community, including the language project that Lucero and I attempted.

"And so, that's why it never went any further than that. That was the biggest stumbling block," he said.

Unlike other neighboring pueblos that are actively practicing Keres revitalization, in Laguna, none of this is really happening. Instead, the view in Laguna is, if you want to learn the ways — the language, the culture — then you should move back to the reservation and contribute to the tribal community. Then maybe cultural doors will start to open.

I respect this approach, and if I believed that making such a move would bring me closer to my language, I'd settle back on the rez without question.  But I need to see a commitment from the tribe itself that it even wants tribal members like me to learn this language, without ridicule, and to pass it on to others the way my grandmother did with me before she died.

It's such a shame. At a time when the Lakota can download their language on smartphones and Star Wars can be watched in Navajo, there has to be another way for the Laguna. 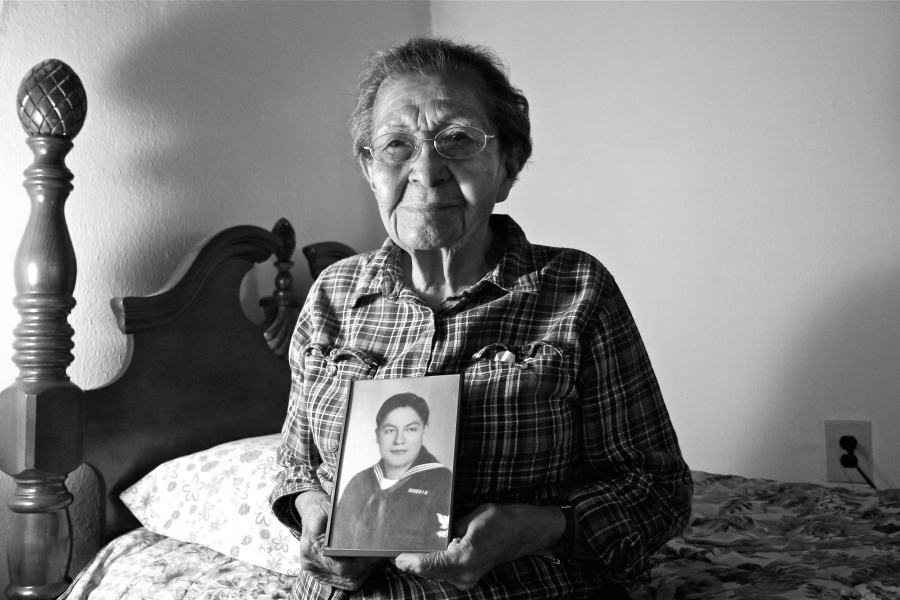 June Sarracino holding a photo of her husband Larry.

4:50 Why June shied away from speaking "Indian."

12:45  "It starts from a small plant, then it starts making more branches."

15:15 "I need a commitment from the tribe itself that it even wants tribal members like me to carry on this language."