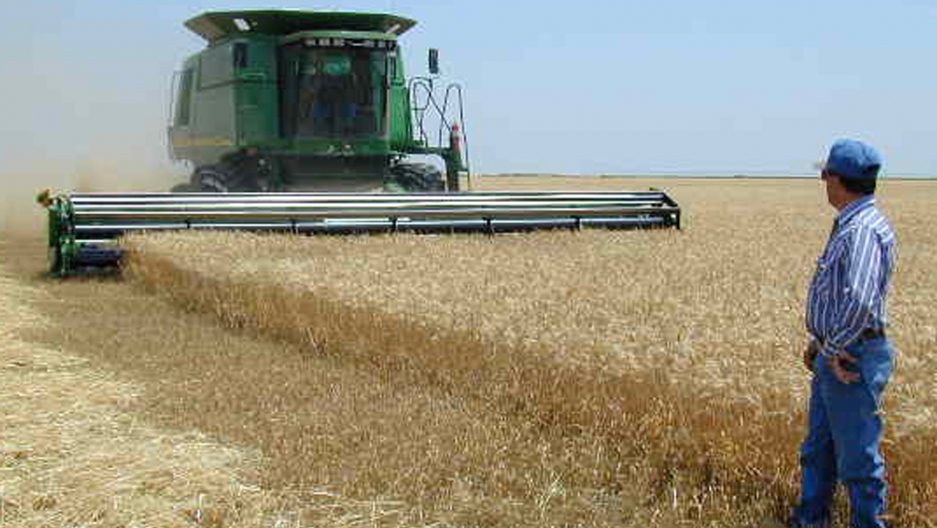 Lance Frederick, a veteran of the custom harvesting industry, is photographed with a John Deere combine in the background in Penalosa, Kansas, in 2001.

Tucked away in West Central Kansas is Lane County, a place that Louise Ehmke has called home for the last 42 years.

Originally from California, Ehmke, now 67 years old, loves living in this rural area, but she’s concerned about the future.

“Our aging population is the hugest thing, and I think most people talk about that,” she says. “And it’s getting worse every year.”

Every year, there are fewer and fewer people around to appreciate the sprawling sunsets that cross over the flat plains of Lane County. The county itself has slightly less than 1,700 residents — about 2.3 people per square mile — and Ehmke’s town of Healy has a population of approximately 200 people.

Though the state of Kansas has grown by about 33 percent between 1960 and 2015, Lane County has lost almost 45 percent of its population during the same period.

But Lane County isn’t necessarily unique. The American Communities Project (ACP) classifies it in the “Aging Farmland” community type — just one of 15 community types we’ve been profiling in the lead up to the 2016 election.

According to the ACP, about 576,000 Americans live in an Aging Farmland community. Lane is consistent with other counties in this community type — it’s very rural, reliant on agriculture, predominantly white, and as it’s name suggests, older. According to the US Census Bureau, in 2015 more than 23 percent of the population of Lane County was 65 or older.

“We are dropping in population because as technology advances in farming, less people are needed,” Emkhe says. “When the pioneers came, they had lots of children because they need them to work on the farm. Now, one man can do what 10 people had to do before.”

Though farming technology has brought increased productivity, it’s created other challenges for agriculture economies like those in Lane County.

“As our population drops, then we have communities that are threatened — other support systems, institutions like our county or our schools and hospitals,” Ehmke says. “We are challenged to keep those up. And the next question is who’s going to pay for them as these populations diminish?”

With fewer people needed for farming and limited opportunities in other industries, it’s been difficult to attract and retain younger residents — and workers. From 2013 to 2014, Lane County saw an almost 10 percent drop in employment, according to the US Census.

“That is a daily discussion among my peers — loss of children,” Emkhe says. “We would like for [our] children to come back here, and they marry, and they would like to bring their spouses back. The problem is, what opportunities are there for the spouses?”

With the county’s population decline, it’s also been challenging to maintain businesses. Emkhe says many Healy residents often travel an hour to the larger community of Garden City for goods and services that used to be more easily accessible.

The Sunflower State went through an oil and gas boom, but the drop in gas prices has reduced the number of those jobs in Healy, according to Ehmke.

“We used to have an [oil and gas] company in our little town that employed 15 people, now it’s down to three,” she says.

This past Labor Day, the nation saw the lowest gas prices in over 12 years at an average retail price of $2.44 a gallon. In Kansas, the average price for a gallon of gas was $1.45 this past February.

“Is this the death of rural communities or small family farms, or is it the birth of something?” Emkhe asks. Though she doesn’t have the answer, she thinks that continued investment in education and medical services could help the community.

“We’ve had a problem in the last four years with our governor cutting drastic funding to education,” she says. “It’s been devastating, and people have been very concerned and are ready to get back on track and fund education again. We realize that is absolutely the saving grace for us — people will just leave here in droves if we don’t have continued support for education.”

According to the New York Times, Kansas Governor Sam Brownback cut K-12 education spending 1.5 percent in 2015, and during his five-year tenure, per-pupil state aid has declined from $4,400 to $3,800. In March, Brownback announced a $17 million cut to state universities after tax receipts fell $53 million short of state expectations.

But it’s not just education. Many rural areas do not have enough doctors or medical professionals — only about 10 percent of American physicians work in rural communities. The National Medical Corps, which is part of the US Department of Health and Human Services, uses scholarship programs to attract young doctors and health care workers to rural areas, something that offers hope to places like Lane County.

“Those [programs] are critical for us because we need young, starter-type folks,” Ehmke says. “Maybe they’ll stay, maybe they won’t, but sometimes they stick around, and we dearly need that kind of support to be able to stay in these rural areas.”

While the community is facing a number of challenges, Ehmke says she often thinks back to an old saying used by former Agriculture Secretary Earl Butz: “Adapt or die.”

“There are some young people coming back that want to be in these small communities, but they need support,” she says. “We do consider ourselves a land of opportunity out here. But you have to bring your talents and your skills.”