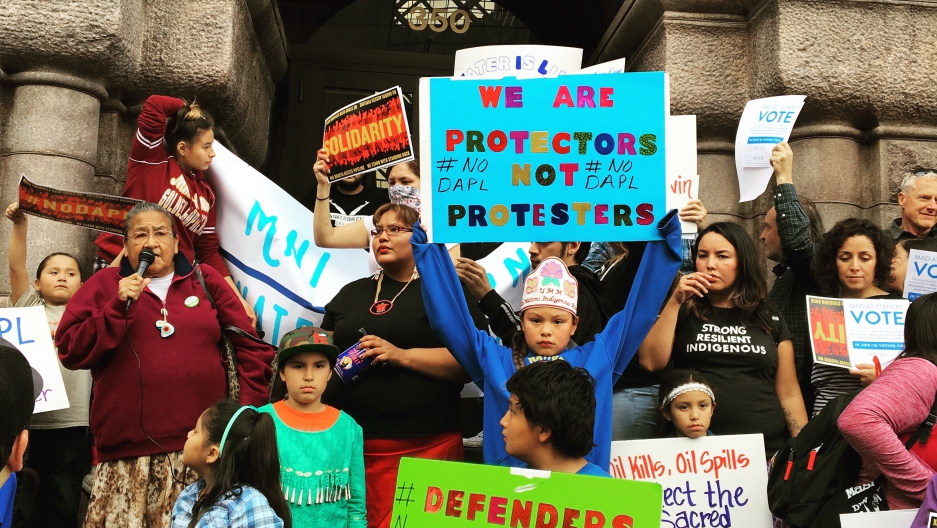 More than 140 people were arrested on the Standing Rock Sioux reservation near Cannon Ball, North Dakota, last week. It’s just the latest in a series of standoffs between the people camped near the Missouri River and law enforcement.

Those clashing with the police decided to occupy a strip of land they claim the tribe owns, according to the 1851 Treaty of Fort Laramie. Police and National Guard soldiers from North Dakota, Minnesota and elsewhere used pepper spray, smoke bombs and sonic weapons to clear a camp directly in the way of pipeline construction.

Headlines coming out camp in North Dakota have read like this:

But people who support the Standing Rock Sioux tribe object to the term "protester." They prefer “water protector.” They insist that they are protecting not only Native people living near the Missouri River from potential contamination from the pipeline, but non-Natives living in nearby towns.

“The term protester is a colonized term for standing up for what’s right,” says one young Native woman in a video produced by BuzzFeed.

The term water protector started before the latest standoff. But it's a term that environmental activist Dallas Goldtooth and everyone at the camp insists on using. The word "protester" is negative, he says. It makes Native people seem angry and violent for protecting their resources. He tries to assist media that head to the Oceti Sakowin camp to report.

“This land is everything to us,” says Goldtooth, who works with the Indigenous Environmental Network and has been at Oceti Sakowin — Sacred Stone in English — since April, when protests and demonstrations began.

For a lot of people involved in the demonstrations, the fight begins with prayer. Sterlin Harjo, a filmmaker from Oklahoma, has been out to the Sacred Stone camp and is making a documentary about several people there.

"At Standing Rock, people started living outside the system. 'Cause that system is broken. That system is why we have this problem in the first place. Instead of hitting the streets, people have camped, prayed and sang songs. America is not ready for that. We aren't playing their game. We aren't complying with their sanctioned methods of protest," Harjo said on his Facebook page.

The protests have extended beyond Standing Rock as well.

“Mni Wiconi!” was the rallying cry folks used at a recent protest at Minneapolis City Hall. Those are the Dakota words for “Water is Life.”

The event, which targeted Hennepin County Sherriff Rick Staneck's decision to send deputies and other support to law enforcement at Standing Rock, was billed as a protest, yet those standing outside city hall held up signs declaring, “We are protectors, not protesters.”

The 1973 standoff between the FBI and the American Indian Movement (AIM) at Wounded Knee was the last event to receive this much attention in Indian Country. Those activists who occupied the small town on the Pine Ridge Indian reservation in South Dakota also wanted the right to name their own struggle. AIM members insisted they weren’t occupiers — this was their land, after all.

They wanted to call attention to the abuse of power and corruption their tribe was accused of. And even though their movement was criticized for being too militant, they gained support and recognition from all over the world — including at the United Nations. They chose the Wounded Knee site because of its historic significance and because the town was located in one of the poorest counties in America.

At one point, though, AIM was listed alongside 50 other domestic groups as being a terrorist organization.

Just like the events at Wounded Knee more than 40 years ago, the confrontation at Standing Rock has electrified Native people, with a groundswell of support coming from more than 300 tribes. Plenty of non-Native people have also joined. Many in the Native community are hopeful it will propel politicians and mainstream media to finally pay attention to their issues.